If you ever find yourself bored and out of things to do or try in Dubai, the new Playbook app is for you.

By Pamella de Leon July 28, 2022
Opinions expressed by Entrepreneur contributors are their own.
You're reading Entrepreneur Middle East, an international franchise of Entrepreneur Media.

If you ever find yourself bored and out of things to do or try in Dubai, the new Playbook app is for you. With a vision to become the ultimate navigator for all food and beverage offers and experiences in the city, Playbook offers a selection of over 1,700 things to do in Dubai. Available for free on the App Store as well as Google Play, the lifestyle app gives an easy, all-access, and free-to-use listing of all ongoing restaurant and hospitality offers, as well as curated experiences in the city.

Launched in 2022, the homegrown concept is the brainchild of Joshua Ashley Collins and Omer Aslan Gurel. With Collins' experience as part of Deliveroo's UAE corporate team and Gurel's background in various entrepreneurial ventures, the duo had earlier partnered to build UAE-born loyalty app, Repeat, and they have once again decided to build a go-to app for people to get an idea on how to spend their free time in Dubai and beyond.

Collins says that the idea for Playbook was based on two key market insights, with the first being the city's numerous F&B and hospitality offerings that are often hard to discover due to their lack of advertising, with merchants often using alternative ways to attract and engage with their customers without offering discounts. Secondly, the duo realized that no other hospitality venue would "give a better deal to a third party than what they were already offering directly to their customers." As such, Collins and Gurel have built Playbook as a platform that brings consumers and merchants together within "one holistic ecosystem."

Using Playbook's smart and intuitive filtering system, users can sift through a fast-growing list from more than 500 verified venues to avail offers like redeemable pool and beach days, set and tasting menus, business lunches, brunches, premium dinners, free flowing evenings, ladies' nights, and more. If you're searching for an offer for a specific day, location, or budget, you can easily filter the listing according to preferences at any given moment. 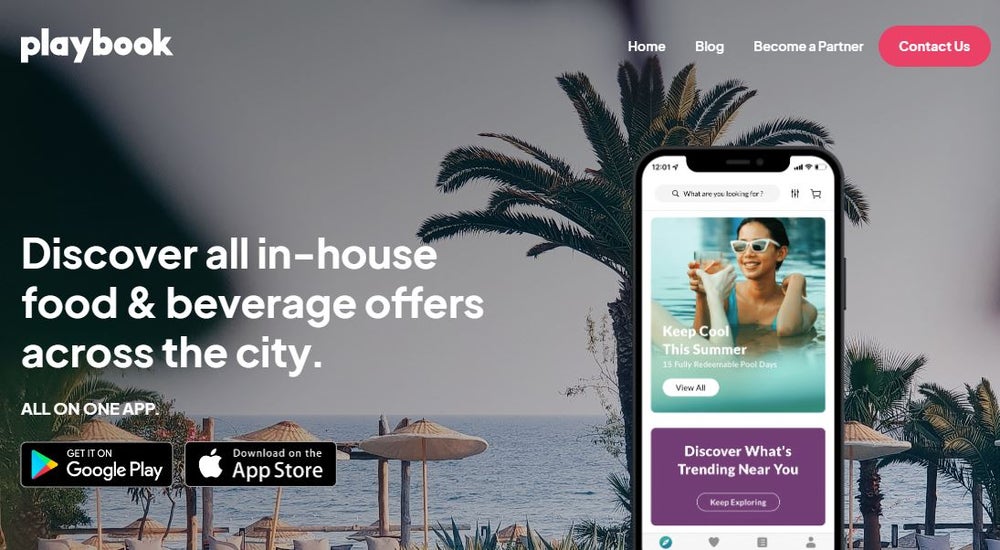 But with similar concepts in the market, how does Playbook fare better than its competitors? According to Collins, Playbook's differentiating factor lies in the fact that it addresses several existing issues in the landscape. "I have been in the UAE for five years, and I have personally seen so many 'discount' apps come and go," he says. "But what if I'm not incentivized enough to drive to a restaurant to get 20% off? We put an emphasis on highlighting value over price. What I mean by this is that our user profile would typically be happier to spend slightly more to get a lot more value. This is a focus that simply does not exist with our competitors."

Collins also points out that one of the key issues merchants face today is visibility- something that he had seen firsthand in the two years he spent at Deliveroo. "With so many new venues constantly opening up, brands have to stay innovative with what they are offering in store to remain relevant," he says, noting that unless a customer follows a brand's social media account or sees an article online, they won't know the venue's offerings. "We have thus created a unified place for brands to post freely what they are offering in-store," says Collins.

As for its business model, the app is completely free to download and use for consumers. Customers aren't required to register until they want to purchase an experience. Currently, the startup has a team of researchers compiling compelling F&B offers in the market. "If listed merchants wish to control their own page, and have the ability to launch new, one-off, or limited-edition experiences exclusive to the Playbook users, we charge a monthly fee, and take a small percentage of each 'experience' purchased," Collins adds. "Although we take a commission, our model is to help make our Playbook partners incremental revenue."

Related: Marketing Your Restaurant In A Digitally Competitive World: The How-To 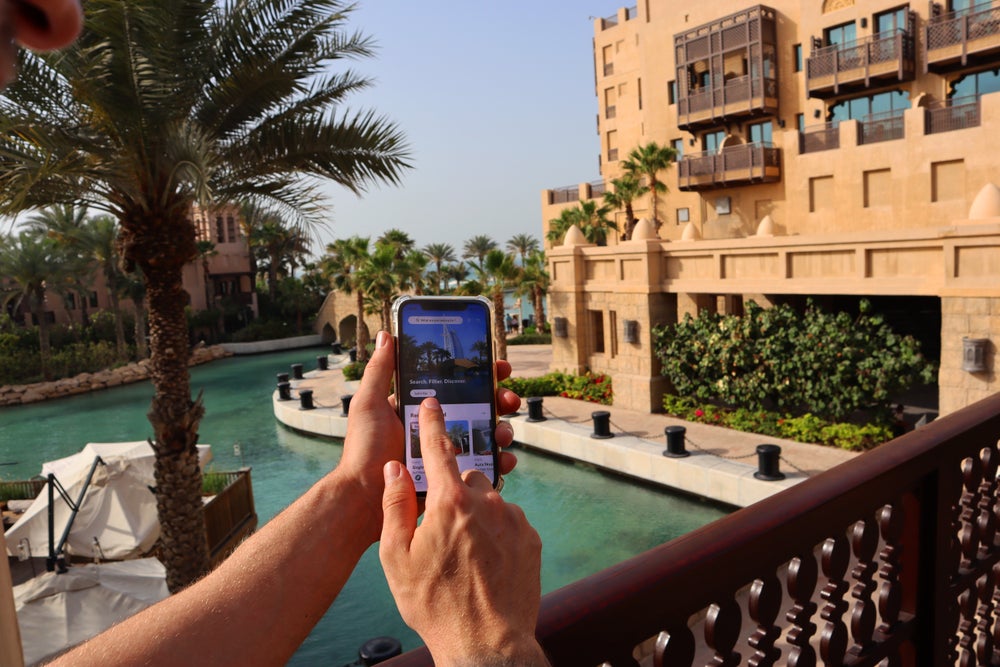 Collins also points out that Playbook's merchant partners can have access to the app's merchant panel, which allows brands to post its latest internal offerings freely and directly on the consumer-facing app. Playbook partners also have the option to create exclusive experiences by "upselling," which encourages customers to spend more and can be purchased directly through the app. And so far, considering that Playbook was only officially launched in March of this year, Collins points out that they are currently "experiencing vast organic growth" in acquiring customers and active users. Feedback has also been encouraging, says Collins.

"Some users say they can't believe no app has been created like this before. And we've thought about that too, and now realized how much hard work goes into compiling all these venues' listings. But it's absolutely rewarding to know that our research has helped our users make quicker lifestyle decisions using the app." As for merchants, Collins states, "They no longer want to be associated with more 'buy one, get one' offers." The merchants are keener to push in-house offers, which has created better value for the brands, compared to usual buy-one-get-one strategy."

When it comes to funds, Playbook has prioritized staying lean, with the team having raised over US$400,000 from a number of angel investors from the region. And as the startup continues to ramp up growth, Collins notes that it will look out for strategic partners to help scale to other markets. On that note, Collins expresses his excitement on how Playbook can quickly scale. "With our model, we can be live in any city without physically being there, before setting up an office to upsell the Playbook panel." In fact, Collins reveals that the app will be operational in Abu Dhabi later this year, and that it plans on opening in its first international market in 2023. 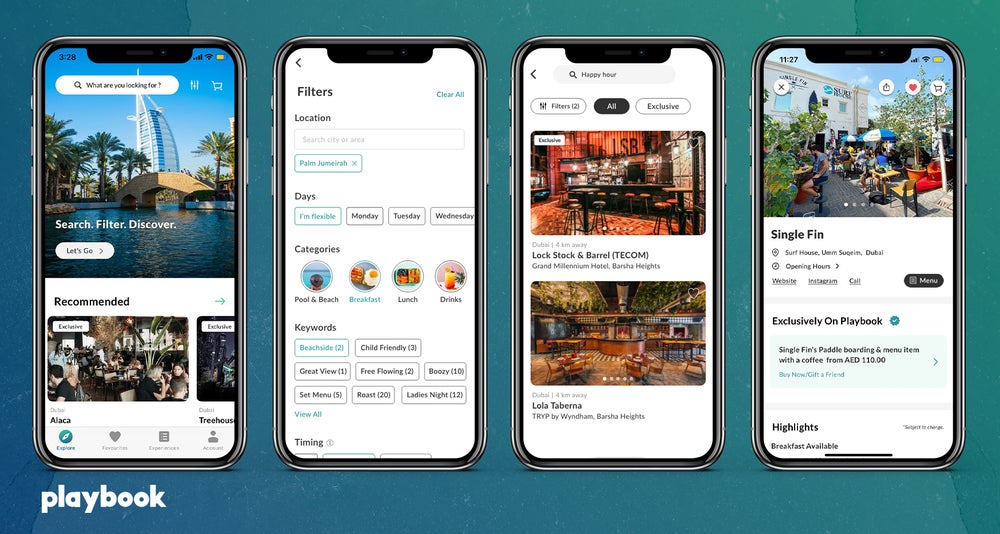 As Collins relays his plans for Playbook in the future, it's rather clear that he has become quite comfortable in his entrepreneurial avatar- which certainly wasn't the case not too long ago. "One of the hardest things about starting a business is 'starting,'" he admits. "I think it also took a certain level of naivete on my behalf to actually bite the bullet and leave the security of a salary." However, while Collins agrees that he has got himself on a tiresome career trajectory, he doesn't seem to regret it in the least. "The things you find most stressful can also be the most fulfilling," he declares.

1. No plan is perfect "Be prepared for lots of trial and error. We ducked and dived our way to launching. Some things need fine-tuning, and you need to be able to move quickly and efficiently. I think being open to the fact that some things don't always go to plan is important- and the best way to find out is by doing it."

2. Foster a community around yourself "Surround yourself with people who also wholeheartedly believe in the vision, whether they are co-founders, investors, mentors, or team members. We have been very lucky at Playbook to have great shareholders who help drive the business in a variety of ways."

3. Be open to ideas "Speak to as many people as you can. A valuable piece of advice I got at the beginning of my journey was, 'You should aim to spend four hours a day with people you do not know.'"