Women in science, technology, engineering, and mathematics (STEM) careers can often feel isolated at work if they don't have a lot of other female colleagues. Fortunately, the internet has more ways for women in tech to connect than ever before.

By Esther Schindler
June 13, 2019
This story originally appeared on PCMag

Women who aim to get ahead in the tech industry -- or simply survive corporate life for that matter -- often feel alone, lacking in work friends or other tech women upon whom to call. And that feeling is confirmed by research: the "2017 Women in Technology Study" by the Information Systems Audit and Control Association (ISACA) concluded that 48 percent of women in tech reported a marked lack of mentors and advisors.

That's almost half of the women in tech jobs feeling isolated. However, I'm here to reassure you that you aren't alone. There are plenty of ways for women in tech professions to connect with one another, whether for moral support or career networking. Whether you're looking for venture capital (VC) funding, in-person meetups, or just an understanding ear, one of the following 40 resources is bound to put a smile on your face.

While this is a fairly long list, it's still far from complete. Not only have I undoubtedly missed a number of existing resources, there are new ones springing up all of the time. One commonality among all of these organizations and communities is a desire to encourage more women to get into STEM fields. That's a great goal, but not the focus of this article. Therefore, this isn't a list of educational websites where you can learn tech skills. PCMag has already covered online tech-learning resources many times this year, including its coverage of how to learn to code or build apps economically. The resources I highlight in this article are listed because they foster interaction among women in tech jobs as well as support.

I'll start where I began. I've been a woman in tech for a long time. My first significant experience with tech women's online communities was Systers, a private email list begun by Anita Borg in 1987. I've been a member of Systers since the mid-1990s and it's still going strong. Systers is always my first recommendation for techie women because it's a safe space to ask for advice no matter where you are in your career path. To join, you must be a woman involved in technical computing. Messages posted must be relevant to those subjects (no cat photos here) and moderation is both firm yet friendly. Systers' success led to the Anita Borg Institute working in other realms to support women in IT, such as the annual Grace Hopper Celebration of Women in Computing (the conference is held in both the United States and India) and the Anita Borg Pass It On (PIO) Awards (more about that later). 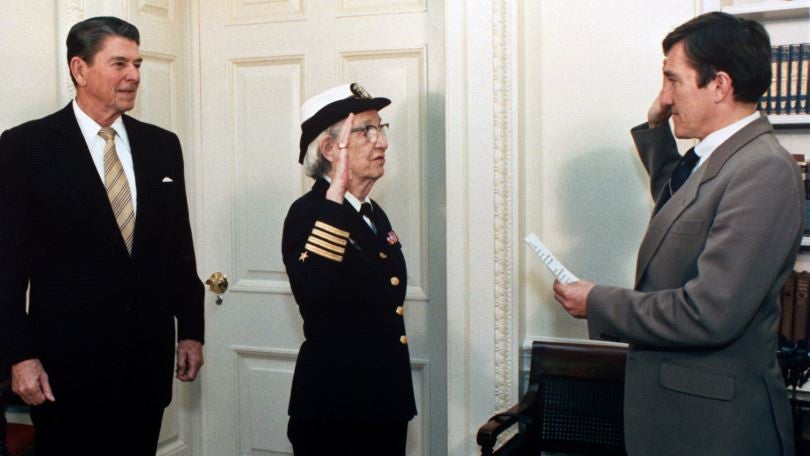 Grace Hopper (middle), who, years after this pic was taken, posthumously received the Presidential Medal of Freedom in 2016.

Systers isn't the only email list. However, as with other email groups, many have dispersed as participants move to other social media. For example, Wise-Women is a friendly community for women web developers and Debian women continues to have conversations about topics such as "Gender diversity and inclusiveness in free software" and "Who wants to get together for lunch at the conference?" The same applies to PyLadies (for Python enthusiasts).

Many online forums and email lists were replaced by other online communities. One small-but-useful favorite is Elpha, which is basically "News.Ycombinator without testosterone poisoning." I confess that I haven't found an ideal home on Reddit yet. But three places that warmly welcome tech women and have happy, lively conversations are Ladies of Science, Girls Gone Wired, and Feminisms. I'm always in search of more.

In other cases, women have built private or public "tree houses" for themselves in larger communities. For instance, the Rands Leadership Slack group has a "women in leadership" channel. Or the online community may be for women only, such as the Women in Technology Slack group.

If you're a fan of more mainstream social media communities, then check out the Women in Tech (WIT) organization, which has groups on both Facebook and LinkedIn. Another large group is Women Who Reign on Facebook, though there are many more smaller groups, too.

As I mentioned, plenty of nonprofit organizations cater to tech women. The organizations may be general, such as the services offered by the aforementioned Anita Borg Institute. In addition to the Grace Hopper conference, for instance, the Anita Borg Institute also helps women (especially students) find jobs at job fairs and offers speakers at local events. As you might be able to tell, I'm most familiar with its services. However, many more organizations serve the interests unique to different communities. I may not have personal experience with them, but they certainly are worth exploration.

Lesbians Who Tech seeks to increase the number of LGBTQ+ in tech. They're primarily known for inclusive conferences, with 42 chapters worldwide in major tech hubs. The organization also has a coding scholarship.

Girls in Tech is a global nonprofit and community for women in tech and entrepreneurship. They host events, conferences, and workshops, such as coding boot camps, mentorship programs, and "fireside chats" with entrepreneurial women. Related organizations, with varying services, include Black Girls Code, Brown Girls in Tech, Latinas in Tech, CyberTech Girls, and STEM Advantage. Practically speaking, your best choices are likely driven by geographical compatibility (in other words, ones with a chapter near you) or by age range. For instance, CyberTech Girls is for girls in grades 7 through 12.

Not every community is based on "what you are" as some are based on "what you do." For example, Women in CyberSecurity is a professional organization dedicated to increasing the number of women in the tech field. It does this by providing support, mentorship, training, networking opportunities, and access to industry and academic leaders. It offers a forum and an annual conference hosted at a university.

Speaking of conferences, you should always look for the "Women's track" at any conference you attend, or start your own brown-bag lunch session. For example, the Wicked Hackathon during Black Hat in Las Vegas will raise funds for the Women's Society of Cyberjutsu, which hosts webinars and workshops nationwide.

Many of these organizations are tuned to encouraging young women to enter the tech field or get started on their careers. But plenty more promise guidance to those who are further along in the journey. Those resources may be specific or they may be overarching. For instance, if your interest is mainly in finding a career mentor or paying it forward by providing mentoring, then the Tech Women program connects professionals with women worldwide.

More general organizations are exemplified by Women Who Code. The woman who recommended it to me was passionate about its benefits, such as shared stories of women working in technical roles as well as conference and boot camp scholarships. Similar organizations worth exploring include Women Techmakersand Women in Technology International. There are over 20 of these organizations on IBM's Women in Technology (WIT) list. Each organization has its own social vibe as well as unique services, such as workshops in soft skills like public speaking. If one doesn't work for you, don't give up; try another.

Newsletters and Other Information Sources

Sometimes we don't want to talk, virtually or otherwise. We just want information. In the context of women in IT, that means sensible curation of "news I can use."

I subscribe to a scary number of newsletters. But my favorite for the topic at hand is Femstreet, which describes itself as "Your Weekly Newsletter on Women in Tech, Entrepreneurship, and Diversity in Venture Capital." Each newsletter includes investment-related events, current stories about women in business (for example, a VC's article on the current VC landscape for women business leaders), and general business guidance. I click on at least one item every week, which is high praise for any newsletter I receive.

Other newsletters that come highly recommended (I haven't relied on them long enough to say for sure) are Women2 and Veni Kunche's Diversify Tech. Both promise event lists, job postings, scholarship opportunities, and much more.

Finally, I'm not a podcast person, but if you are, then Battle Tactics for Your Sexist Workplace is highly regarded. Jeannie Yandel, Eula Scott Bynoe, and "some badass expert" promise to bring you real tactics to survive the workplace or change it.

Often, we care about human networking only when it's time to find a better job. If that's the real reason you're reading this article, then sign up (for free) with Tech Ladies. This is a robust and worldwide community with 50,000 members. It provides a job board, a sometimes-useful newsletter (it's at least worth scanning), and networking events all over the U.S. and Canada.

Fairygodboss describes itself as "a community of women sharing advice and asking questions," but it appears that many of those conversations are about work. Beyond active job listings, it includes salary comparisons and maternity benefits.

MotherCoders' mission is to help women with kids on-ramp to careers in tech "so they can thrive in a digital economy." It's a bit more about up-leveling your skill sets to get back into the workforce.

Groups that are also in this same realm include the aforementioned Diversify Tech, which offers job listings and scholarship/speaking opportunities; incluzion (yes, that's spelled correctly), which connects professionals of color and women to companies looking for freelancers; and theBoardlist, which connects exceptional and experienced women in senior positions with board opportunities.

Another option for ambitious women is more and better speaking opportunities. To make yourself a little more searchable for keynoting conferences, consider adding yourself to Women Who Keynote. The website's goal is to contribute to the elimination of all-male panels and help improve the visibility of women in male-dominated industries.

As you explore these resources, you will no doubt notice that many of the nonprofit organizations have scholarships and other funding opportunities for women. One example is the twice-yearly Anita Borg Pass It On (PIO) Awards; it offers grants of up to $1,000 for women working on projects that inspire and support girls and women to enter computing. One recent award supported a project that provides Tech-in-a-Box kits to rural schools. Another award helps users create personalized STEM-inspirational storybooks for their children. (For transparency: I've been among the volunteer reviewers since 2010, and am the incoming chairperson for PIO.)

But that's far from the only option for funding. If you're trying to get a business going, then consult this list of 133 VCs, investors, accelerators, and resources that support underrepresented female founders and investors, courtesy of FemStreet's Anna Phan.