This Ace Has the Recipe for Success

Duff Goldman--host of Food Network's &lt;i&gt;Ace of Cakes&lt;/i&gt;--hasn't exactly followed a conventional business plan, but proves he knows what it takes to succeed in the business world and in life.

He's not your typical baker. He's not exactly your typical reality TV star either. And he's definitely not your typical business owner. Duff Goldman, the 32-year-old owner of Baltimore-based Charm City Cakes and star of Food Network's Ace of Cakes, wears many different hats, somehow finding time to operate a bakery, participate in a reality TV show and play bass in a band.

Normally, we refer to our interviewees by their last name, but Duff Goldman, whose gregarious personality could probably handle three or four names, says he prefers to be known simply as "Duff." He laughingly explains he definitely doesn't want to be known as the too-formal-sounding Chef Duff, Mr. Goldman or sir. When I spoke with Duff, he was on his way to the commencement ceremony for the Culinary Institute of America, where he was scheduled to deliver the keynote address. Duff is a 1998 graduate of the school's 30-week Baking and Pastry Arts Certificate Program and had plenty of advice to pass on to the culinary graduates. "This is my first formal commencement speech, like 'Go forth and cook, young culinary students'--that kind of thing. I plan to make them laugh and goof off with them," says Duff.

This type of humor and infectious personality are part of what made Duff the natural choice for Food Network in February of last year. That, along with his use of power tools when assembling some of his cake creations, sets him apart as the ultimate extreme baker.

Before rising to fame, Duff performed a live cooking show before an audience. While the show didn't appear on television, one day a friend decided to tape it. With a little help from Duff's brother, Willie, an entertainment industry veteran, the tape landed in the hands of a Hollywood production company. "The live theater-style performance was a comedy show, but I was really baking. I was goofing off, but at the same time, showing people how to make soufflés," Duff says. Shortly after watching Duff's recorded antics, the production company introduced the idea to Food Network, where Duff had appeared on several of their competition shows.

Life Inside Reality TV
Since Food Network picked up Ace of Cakes in 2006, Duff and his friends at Charm City Cakes have already completed their first season and are now in the middle of filming their second season, which started in January. And they show no signs of letting up. Duff was excited to report the network has already ordered a third and fourth season, totaling 26 new episodes. "I'm super stoked! It's a blast, it really is. I get to go all over the place for the show, it's awesome. And it doesn't really interfere with business; in fact, it helps," says Duff.

For the average person, it might be hard to imagine having a camera in your face every second of your workday and not letting it interfere with business. But Duff says the producers are respectful and know when to step back and let him and his staff have their space. "We do tell them sometimes, 'Today, leave us alone,'" says Duff. It doesn't hurt that aside from being Duff's older brother, Willie is also co-executive producer of the show. "Some days I'll call Willie and say, 'I just really need to work.' And he'll call the production guys and say, 'Don't come in today,'" Duff explains.

Since Duff and his Charm City Cakes crew don't have any previous media experience, his brother's tips come in handy. "He's there to look out for me. He's in the entertainment business, I'm in the cake business, but somehow we came together and it just works," says Duff.

But not all the cake artisans were thrilled with the concept at the start. Duff admits he and his staff were a bit apprehensive at first and skeptical of entering the reality TV genre. But they've all been impressed with the way the production company put the show together. Instead of trying to create drama where there isn't any, Ace of Cakes producers let the drama happen, and it usually centers on the stress of getting a cake done in time. "It's about us succeeding; it's not centered around somebody you love to hate, like Simon from American Idol or the dad from American Chopper," says Duff. "We don't yell. We don't try to stab each other in the back. It's a fun, happy cake shop where people love their jobs. I think that's refreshing for people to see these days."

Going Against the Grain . and Succeeding
Maybe it's the musician in him, but whatever it is, Duff says he doesn't follow the traditional business model when running Charm City Cakes. In fact, he says he's done quite the opposite. "We're the classic Bad News Bears story--me with absolutely no business degree running a business and hiring all my friends. I've done exactly what they tell you not to do in business school," Duff says. "But I think I've shown a lot of people that you can run a business on a very different model than the traditional way of thinking." 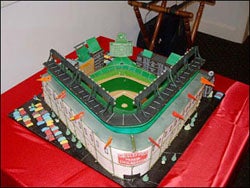 From the beginning, Duff chose to hire his friends to work alongside him, including show favorite, Mary Alice Fallon-Yeskey, the office manager of Charm City Cakes. He met Fallon-Yeskey while working as the maintenance person for the building she was living in. They quickly became friends, and she became the obvious choice to fill a pivotal role in his bakery.

And it's no wonder Fallon-Yeskey took the position. Going along with Duff's non-traditional business plan, employees get two months of paid vacation each year. They take off the entire month of February, a few weeks in August and the weeks of both Christmas and New Year's. According to Duff, the breaks are well-deserved. "They work so hard that everybody needs a break," Duff says. "It shows them that I really value who they are and that if it wasn't for them, I wouldn't be where I am."

Also showing his appreciation, Duff spent the $10,000 he recently won from a Food Network contest on his employees. He rented a house in Mexico for a week and invited the entire bakery down to join him, providing the plane tickets. "That $10,000 I spent on the house in Mexico is going to turn around and come back tenfold, since my employees recognize how much I care for and appreciate their talents and efforts," says Duff.

Maintaining Sanity and Feeling the Groove
As much as he loves his staff and his job, Duff is the first to say he won't let work dominate his life. "That's something I want to tell the culinary students in my speech--make sure your life is balanced. Don't just work all hours of the day because as a cook, you will," he says. For Duff, his indie instrumental band, .soihadto., is what keeps him sane when life gets hectic. "It's nice to drop the mantle of the guy in charge to instead be the guy holding down the groove," says Duff.

In fact, music is the main reason Duff started Charm City Cakes in March 2000--so he could make his own hours and have time for his band. "That's what really got me into starting a business, since with previous jobs I've had, I didn't have the time to play gigs and go on tour. But now, I can close for a week and go on tour if I want to," Duff explains. When asked if he would leave the world of cakes if the opportunity to become a professional, full-time musician happens to arise, Duff responded, "I would definitely have some serious thinking to do."

There's No Shortcut to Success
Though Duff won't discuss profits, he says, financially, the bakery's getting by just fine. "Our checks all clear, and we're able to pay our bills," says Duff. He adds that he doesn't have any plans to expand and would prefer to maintain the integrity of his product by keeping the volume low and keeping his employees sane and happy.

If you were wondering how success has changed Duff, you might be surprised to find out that aside from having a longer wait-list for cakes, Duff still drives a delivery van as his car and still lives in his two-bedroom apartment above the bakery. "Reality TV on basic cable doesn't pay as well as most people think. People think I'm a millionaire, and I'm like, 'Are you kidding me?'" But, he wouldn't have it any other way. "I'm very happy to work 15 hours a day. It doesn't bother me. We're having a really good time," Duff says.

And for Duff and his crew, that's what it's all about. Despite business advice from his dad--also an entrepreneur and owner of a local chain of sports clubs--to raise prices now that his cakes are in high demand, Duff refuses to do so. "We're still charging the same prices that we charged before the show. We charge what they're worth, but we're not charging extra because we're on TV. I don't want to be that guy," Duff explains. For him, it's not about becoming a baker to the stars and bringing in top dollar for each cake he sells. Instead, he wants to continue making incredible cakes for people making a normal living.

Duff has definitely come a long way, but he's paid his dues to get where he is. He stresses the importance of hard work and persistence to both his culinary students and future entrepreneurs. "There's no magic business pill that will all of a sudden make you good at business. You just have to work hard, be nice to people and make a good product, and things will work out for you. All the details will fall into place, but keep in mind there's no shortcut to success," Duff advises.

As for the future, "Seasons three and four will be even bigger and crazier and more awesome than the first two," says Duff. Creations in the works include a cake for the upcoming installment of the Shrek series, in addition to a cake for none other than Hugh Hefner, which Duff says could take place in his infamous grotto. "I'm really excited about that one. I don't even know if they're going to be able to show that one on TV," Duff says with a laugh.

No matter where Duff's new adventures and opportunities take him, you can be sure he will keep baking, keep goofing around and keep on rockin'.