A mix of 'failure to launch,' zero desire for financial independence and attractive family plans mean half of people age 18 to 24 are still mooching off actual adults.

By Eric Griffith
August 6, 2019
This story originally appeared on PCMag

In a new survey of 1,000 Americans across all ages conducted by Let's Talk, a website devoted to helping users find the right mobile-phone carrier, the results were, in its words, "startling." Some might say sickening. The survey found a full 49 percent of young adults age 18 to 24 are still getting their smartphones' voice and data service paid for by their parents (or another responsible adult in the family). 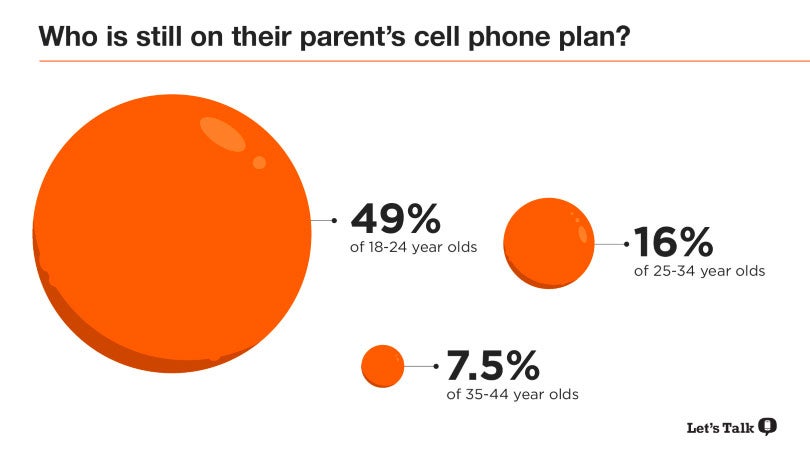 The number drops quite a bit when they hit 25 -- the age you can also also rent a car with less hassle, so it's the magic number where everyone becomes instantly more responsible. Only 16 percent of people age 25 to 34 are using a plan paid for by parents. Finally, at ages 35 to 44, the number goes down to 7.5 percent. After age 45, Let's Talk didn't ask, probably because those are the parents.

Across the entire group of 1,000 respondents, Let's Talk found a full 73 percent were on some kind of shared family plan (where everyone probably pays, but they get a cut rate) rather than an individual plan; that goes up to 79 percent for ages 18 to 25. Family plans may facilitate Peter Pan Syndrome, but they also save money.

Let's Talk's top choice overall is T-Mobile's Magenta Family plan, which comes with free Netflix. That's a strong incentive not to get your own carrier.

If you're over 18 and actually looking for some independence, read The Best Cheap Cell Phone Plans You've Never Heard Of.