Here's a breakdown of Amazon's revenue from across its e-commerce and retail ecosystem, cloud infrastructure, streaming services, consumer devices, advertising business and beyond.

By Rob Marvin
December 30, 2019
This story originally appeared on PCMag

Amazon is relatively unique among giant U.S. tech corporations. It's not just an e-commerce and shopping giant, cloud provider, device-maker or software-and-services platform — it's also a money-making leviathan with tentacles stretching into new industries and markets, which makes it tough to define.

The most accurate way to figure Amazon out is to follow the money. Statista compared Amazon's Q2 2018 and 2019 results to break down how the various segments of Amazon's business are growing. In every sector except physical stores such as Whole Foods (which remained flat), Amazon's revenue grew year over year. 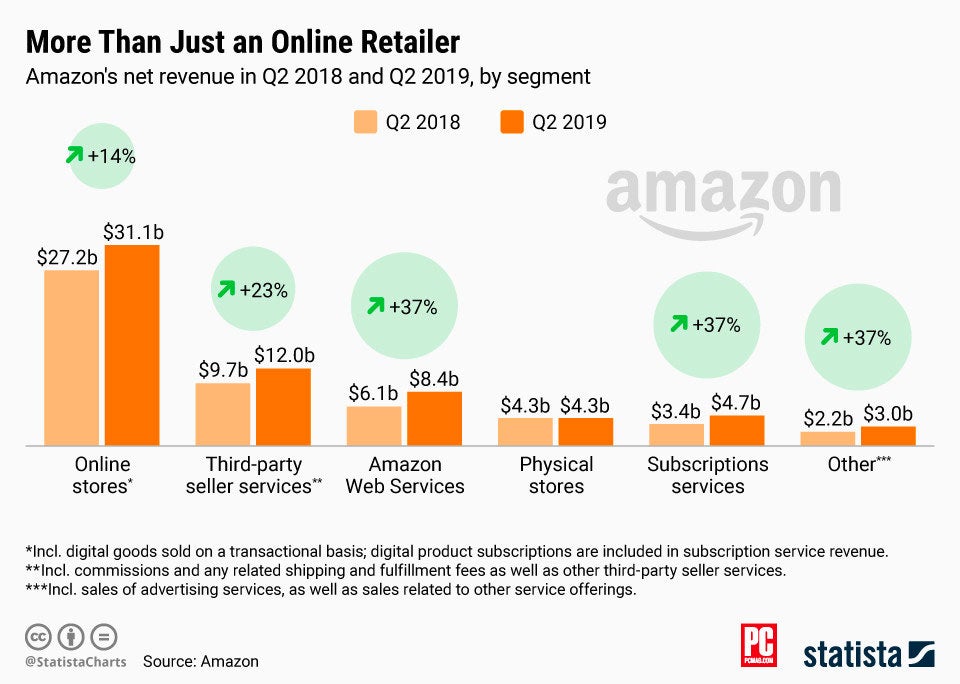 Online-store revenue remains the foundation of Amazon's business, with $31.1 billion in net revenue in Q2 2019. It's also the company's slowest-growing segment, though it's up a very respectable 14 percent.

Aside from its online and physical store sales, Amazon also made $12 billion on third-party seller services in Q2 2019, up 23 percent from a year ago. These include commissions, shippping, fulfillment fees, and other seller services tangentially related to the corporation's online shopping empire. So while sales themselves may not be growing as substantially, Amazon's ecosystem-related revenue still seems to be booming.

The fastest-growing sectors are the Amazon Web Services (AWS) cloud, and subscription services, including Amazon Prime, Amazon Music and Prime Video. Prime memberships got another price hike last year from $99 to $119 annually, and it shows: Subscription revenue is up 37 percent year over year to $4.7 billion.

It's still comparatively small compared to Amazon's mammoth e-commerce revenue, but as with Apple, Amazon's prolonged investment in its services business is paying off. 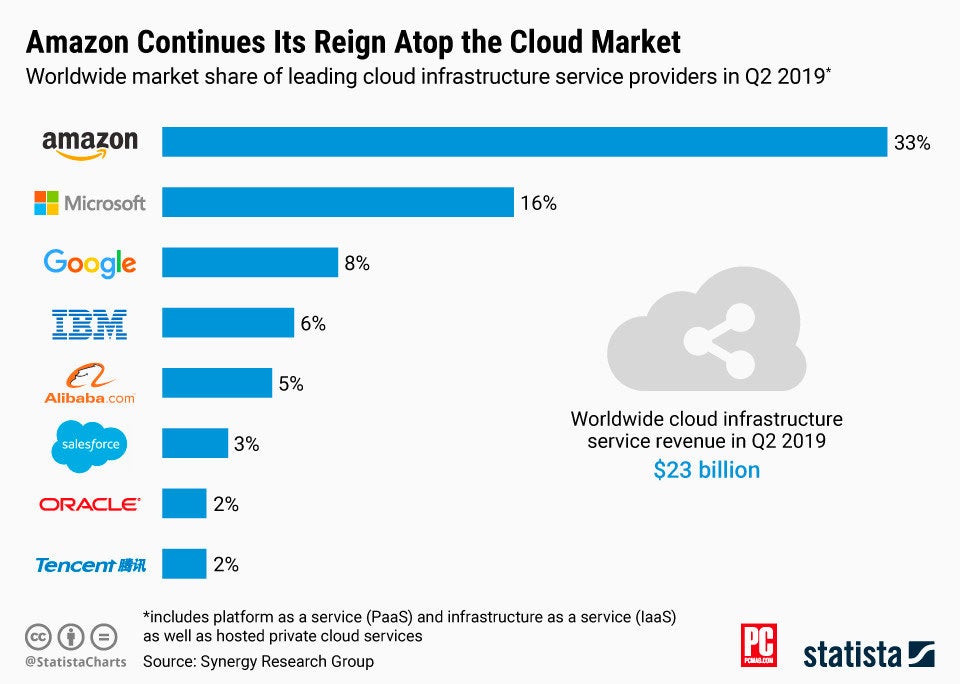 The company spends billions each year financing new original films and series (as well as licensed content) through both Prime Video and its Amazon Studios arm. The escalating war for original streaming content is ramping up as Amazon competes with not only Netflix and Hulu but also Apple TV+, Disney+, HBO Max and more. But if any company can afford the competition, it's likely Amazon.

AWS revenue also jumped a whopping 37 percent year over year to $8.4 billion as Amazon serves as the cloud hosting and storage platform for an increasingly large percentage of the internet.

Finally, there was a 37 percent growth for the "other" category, which includes Amazon's fast-growing advertising business that, along with Facebook and Google, more or less monopolizes the online ad market. Amazon doesn't break out device sales numbers in its earnings releases, but included within the overall revenue are sales of Alexa-enabled Echo devices, Kindle tablets and e-readers, and other Amazon-branded consumer tech products.

Another company Amazon owns is smart home security provider Ring. As Motherboard has reported, the video surveillance company is marketing its tech not only to consumers but also to local governments and police departments across the country to advertise, distribute and use Ring products. The company is also equipping police with facial recognition tech through its Rekognition service, further extending its reach into government and law enforcement services.