How Teen Inventor Went From Sketch to Prototype in 6 Months

By Dinah Wisenberg Brin
September 15, 2012
Opinions expressed by Entrepreneur contributors are their own.

Necessity may indeed be the mother of invention. Sometimes, though, an actual mother is the necessity -- for the inventor at least.

That's the case for Carter Kostler, a 14-year-old ninth-grader from Virginia Beach, Va., whose parents invested time, research and personal funds to make his vision a reality.

Six months after dreaming up his concept for a fruit-infused water bottle -- a product designed with the goal of improving one's health and the environment -- Kostler's invention recently received patent-pending status. And with a little help from the Kickstarter community, he'll soon kick his bottle-making enterprise into full gear with his first production run.

The young entrepreneur expects to have 1,000 bottles arriving in stores during the first week in December, possibly in time for the Christmas shopping season.

"This has been the greatest experience of my life and I consider myself so fortunate to have parents that believed in me," he said.

Related: Teen Inventor Asks the Question "Wouldn't It Be Cool If…'

Kostler got the inspiration for the Define Bottle -- his first entrepreneurial venture -- from watching his mom Carla Weisman cut up fresh fruit in the mornings to make "spa water" in a pitcher. When she left the house, though, she couldn't bring the fruit-infused water with her.

That got him wondering, "How can we make spa water portable?" 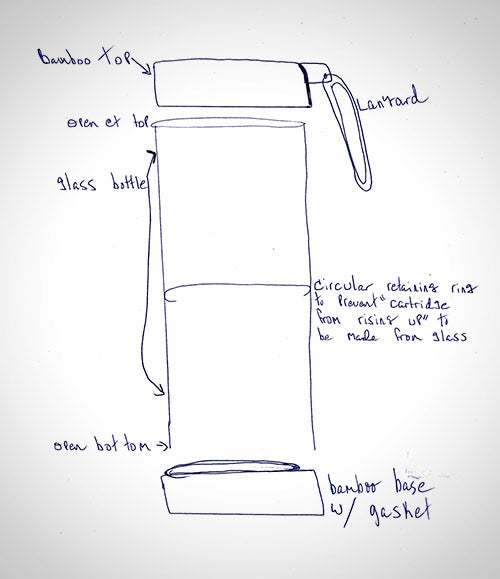 Soon, he came to his parents with sketches, and the family quickly went into action. They researched and found a patent attorney, an industrial design company and a branding firm -- all, coincidentally, in California. The family never met any of the consultants in person.

The industrial design firm signed a non-disclosure agreement, and started making renderings, coming up with some 40 concepts, says Weisman. The family narrowed down their choices, and the designers developed a prototype.

"We really let him take the lead of his vision on it," says Weisman, who filed the patent application in her name because her son is a minor. Kostler, who is interested in marketing, also worked on branding the bottle. And with a recommendation from the industrial designers, the family found a production facility in China.

Weisman said she and her husband have invested about $35,000 in the project, trying to be "as lean as possible" on the costs. Now Kostler, who has made a movie http://www.definebottle.com/#!about-me/cj8t documenting his experience, hopes to raise $10,000 on Kickstarter for production of the bottles, which he expects will retail for $30. The campaign is slated to start in mid-September, says Kostler. 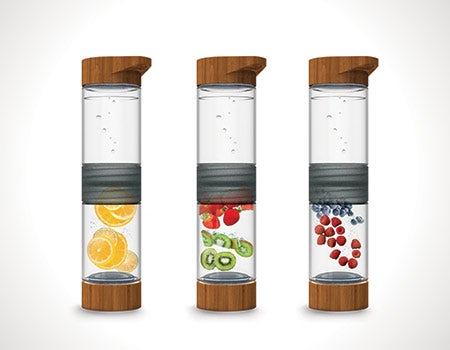 A sketch of what the Define Bottle will look like

The Define Bottle is a contemporary-looking glass and bamboo cylinder that's small enough to fit in standard cup-holders, with two chambers to keep ice and fruit away from the spout. A version made of BPA-free Eastman Tritan -- that is, a plastic-like copolyester is also in the works, says Kostler.

"Aside from [my interest in] improving health, it was important to me to do something good for the environment also," says Kostler, who notes that fruit-infused water is healthier than soda and other artificially-flavored drinks.

While Kostler has received some interest from web traffic for the Define Bottle, he says it would be premature to shop the concept around to bigger companies now. Instead, he plans to focus on his startup -- and high school, which he just began this week.

"I read everything I could get my hands on about being a teen entrepreneur and came across some great resources and really helpful mentors," Kostler says. "From reading articles, I found authors that I connected to and reached out to them for any advice they could share." He started joining online groups and forums, including those geared toward teen entrepreneurs like the Teen Business Forum YoungEntrepreneur's forum and OnStartups.com.

He suggests that all young entrepreneurs research the experts in their fields and contact those they admire or feel could offer helpful advice.

"By reaching out to people, I was surprised just how willing they were to offer advice and mentor me," he says. "I'm 14 and actually have some pretty cool connections on LinkedIn. I emailed them, let them know my story and simply asked for advice."

"I hope that one day I am successful and can pass on my experience," adds Kostler.

How has your family helped you start up? Let us know how the support helped you in the comments below.