How to Humanize Your E-commerce Business With Personalized Messages

By Jesse Aaron
March 26, 2014
This story originally appeared on KISSmetrics

E-commerce websites are no exception to this working law. In fact, e-commerce is one of the least forgiving areas if you simply meet basic requirements. Elements such as site speed, design, positioning, pricing, categorization, and SEO are vital for efficiency and success.

Fortunately, there are many themes and third-party tools available now that handle most of the basic requirements right out of the box. This gives us more time to invest in maximizing each area of e-commerce.

Today, we're going to focus on humanized branding with personalized messages and creative content. The following examples show us how to be more than just a store front by going above the basic requirements of RSS promotion or Facebook Offers.

Ditch Propaganda for a Voice

One of the primary shared goals of marketing and branding on social media channels and email campaigns is to befriend visitors and customers.

It's an idea that has been preached for years but remains minimal in practice. This may be summarized best with a question from our higher-ups, "What's the ROI of a cat meme?" That's not to say all of our friends share cat memes, but the general idea is an e-commerce website can share the same content our friends would share, such as:

The larger the brand, the more limited the content. We're not going to see Macy's tweeting about marijuana legalization, although Ben & Jerry's will be all over it: 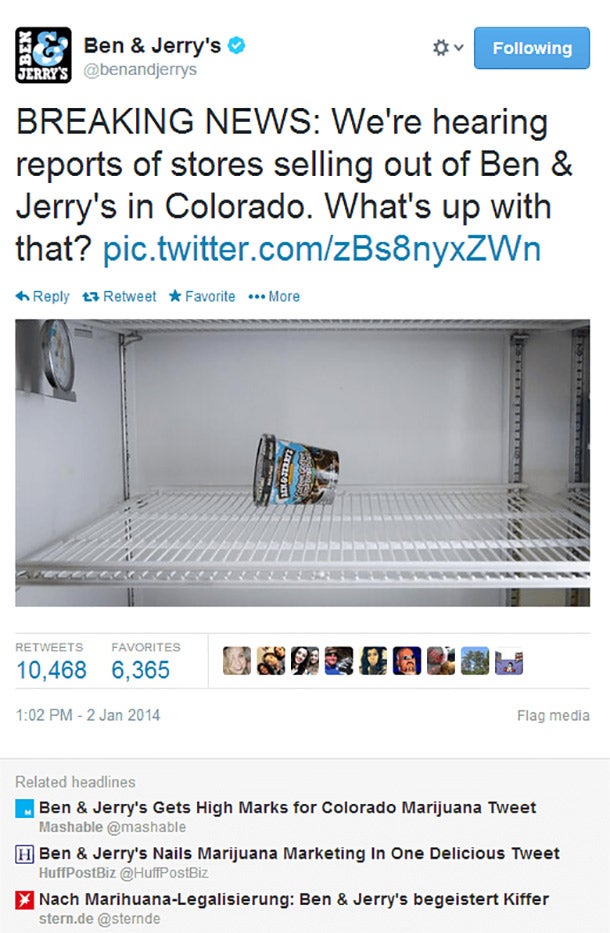 If you know the history of Ben Cohen and Jerry Greenfield, you realize this is almost as expected as Puma tweeting about track runners or Home Depot pioneering a philanthropic campaign to support forest fire fighters.

The magic of humanized marketing happens when the message influences us to go to a site.

How do we differentiate humanized marketing from strict propaganda? 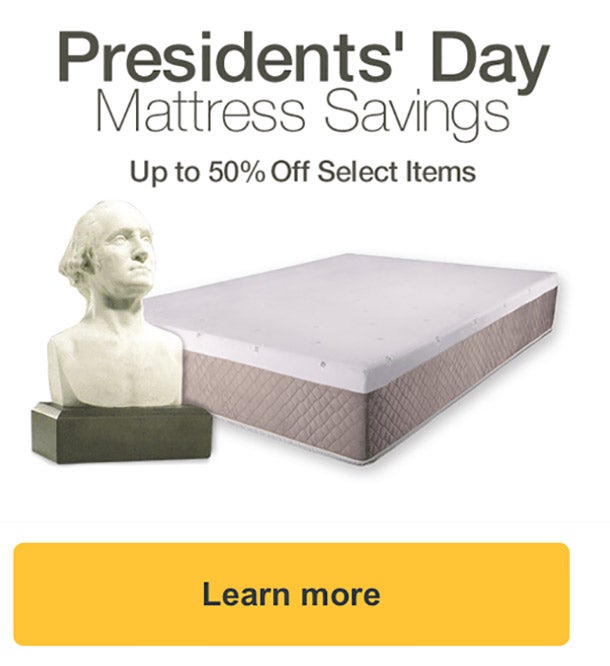 I have expressed zero interest in mattresses, making this a blanket propaganda email around Presidents' Day promotions. This is poor email marketing. I have no attachment to this email, no connection is made, and it goes straight to the trash. 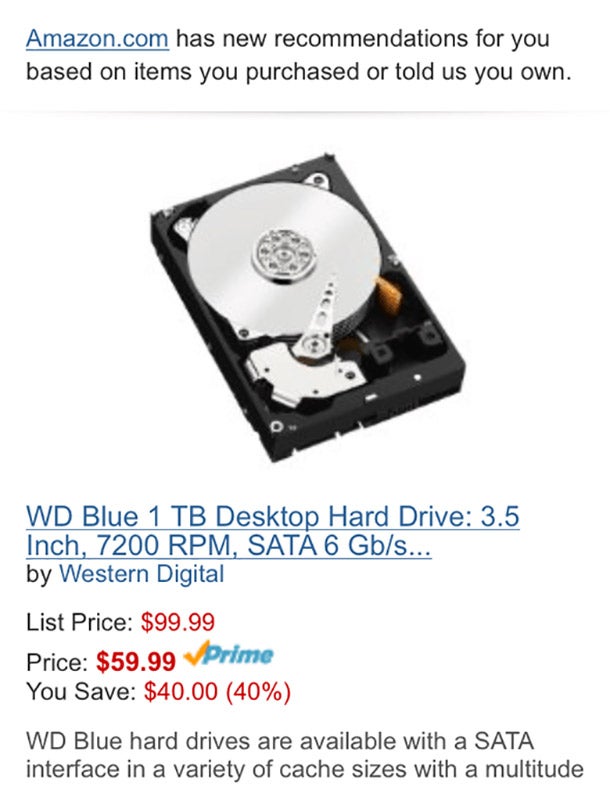 After I built a computer, Amazon sent me personalized recommendations, making the products relevant. I immediately clicked through to confirm the above deal.

For an e-commerce site, this is as "close to a friend" as it gets.

The conversation goes like this: "Hey Jesse, I saw you bought a HDD a few weeks ago. I just wanted to let you know they're on sale again." With eight open slots, I have plenty of room for more HDDs or SDDs, so grabbing them when they're on sale is a great opportunity.

Say Thank You in More than One Way

After ordering the classic Timberland boots last year, I received a card/coupon a week after the boots arrived. It was beautifully designed and thanked me for the recent order. Also, it included a code to enter for a pair of free wool socks.

This is the only brand I've encountered (aside from Bodybuilding.com) that has sent physical thank you cards and rewards.

A few months ago, I purchased a standard workout stack from Bodybuilding.com. Two days after the expected delivery date, I was still waiting. I opened up the live chat on Bodybuilding.com to inquire about the delayed delivery. The representative I spoke with was named Jabbin' Jimmy. In less than three minutes, he solved the problem and confirmed a quick and updated delivery date. I left a positive review. A week after getting the order, I found a handwritten thank you card from none other than Jabbin' Jimmy.

Both Timberland and Bodybuilding could have processed these orders and made their money. I already was a customer. But their humanized follow-ups have me poised to become a long-term customer. I think of quality, service, andfriendliness when interacting with these brands.

Sticking with Bodybuilding, they sometimes send an email featuring articles reminiscent of the BuzzFeed/list style, tailored to their demographic: 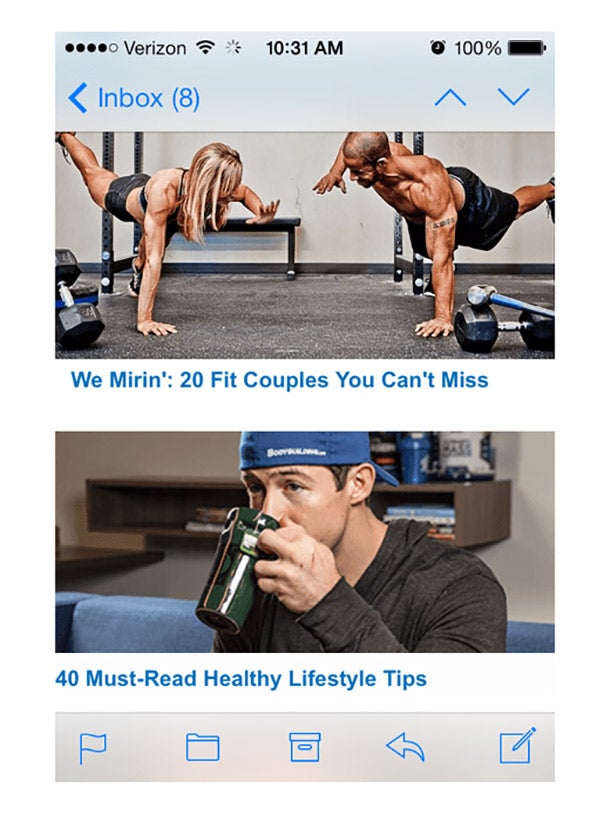 When I received the email above, I quickly tapped through to read the lifestyle tips. That was their goal. I was on their site. And, even though I was reading an article, it was on an e-commerce platform. Deals and recommendations were set in place, ready to hook me at any given point.

Is tailored content a requirement for an e-commerce site to be successful? No.

While list articles remain one of the most popular article formats, tailored content may come in different shapes and sizes.

For example, the Puma homepage features a slide of tailored media:

We have two options: to shop, or to watch a film.

To those unfamiliar with soccer or even Puma's products, this featured media naturally would be confusing if there weren't an accompanying film.

If we break down the marketing campaign at play, we'll see how calculated this message really is.

First of all, Puma has a sponsorship with A.C. Milan (the Italian national football team), which Mario Balotelli plays for as a forward. Mario Balotelli is a rather controversial player, for his mix of remarkable skill and off-the-field activities (such as starting an accidental fire in his apartment by setting off fireworks inside). This controversy and prestige make him one of the most "social" players, meaning that (both in offline and online realms) he's a popular topic of discussion.

The film itself is an advertorial of sorts about their new cleats, evoPOWER. This is primarily an advertising campaign, but the message is targeted and personalized to soccer fans.

After experiencing this media, we may forget we're on an e-commerce website. That's the magic. If we yearn for this experience or want it to continue, we have to grab a pair of advertised cleats.

Almost every e-commerce site, large and small, customizes deals around holidays. It's a tried and true tactic that arguably has become a basic requirement.

Let's see how some of the brands out there maximize Presidents' Day.

Can you guess which e-commerce site this is?

This is an example of simply meeting basic requirements. It even feels like a rush job, as if they forgot it was Presidents' Day and wrote some quick CSS to entice visitors. It's not humanized because we have no connection to it. There's nothing relevant to us, there's only: "Savings! We have them!"

Okay, on to the next one.

Can you guess this brand? 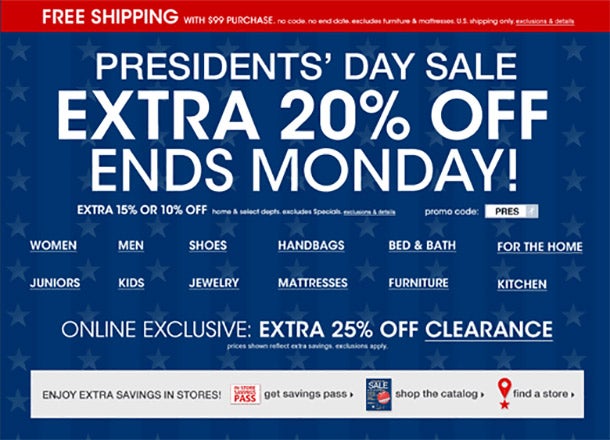 There's a lot more attention to the sale, and they have at least created urgency by telling us the sale will end soon. In terms of regular marketing, this is doing a much better job than Wal-Mart, but it's still not humanized. This example is from Macy's.

All right, on to the final example. This is in the form of an email from Betabrand: 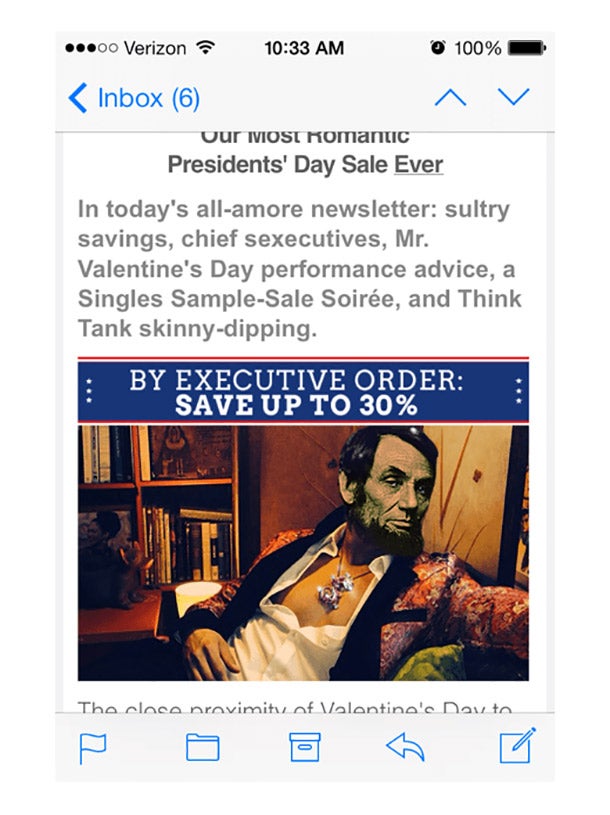 Jackpot. The messages are humanized, the savings are clear, and the media is tailored. I even shared this snapshot with my friends on Facebook. The penny never did President Lincoln justice anyway.

Out of the three Presidents' Day sale advertisements, which one made you smile, laugh, or even just raise an eyebrow?

This is the clear difference between a propaganda-rich RSS feed and humanized marketing.

Earlier, we wondered what exactly is the ROI of a meme?

Even though humor and hot topics are suitable for Facebook, are they really a gateway to product sales for e-commerce sites, or do they just keep visitors browsing around their news feed? 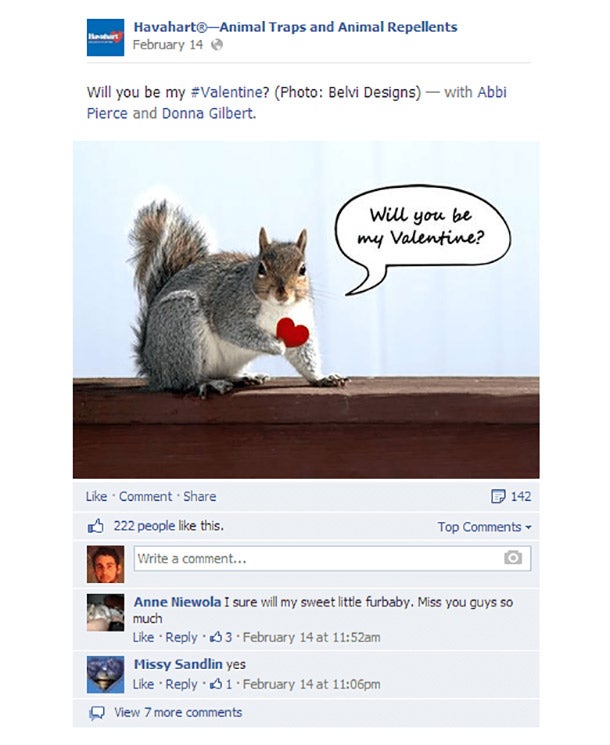 With over 200 likes and 140 shares, the engagement surely is a success. In terms of branding and advertising, this is exemplary Facebook material:

But, is the picture going to be solely responsible for a sale? The response I received points out that, collectively, these posts (mixed with deals, trivia, and related media) increase the chance of conversion.

Are there other e-commerce brands doing this successfully? 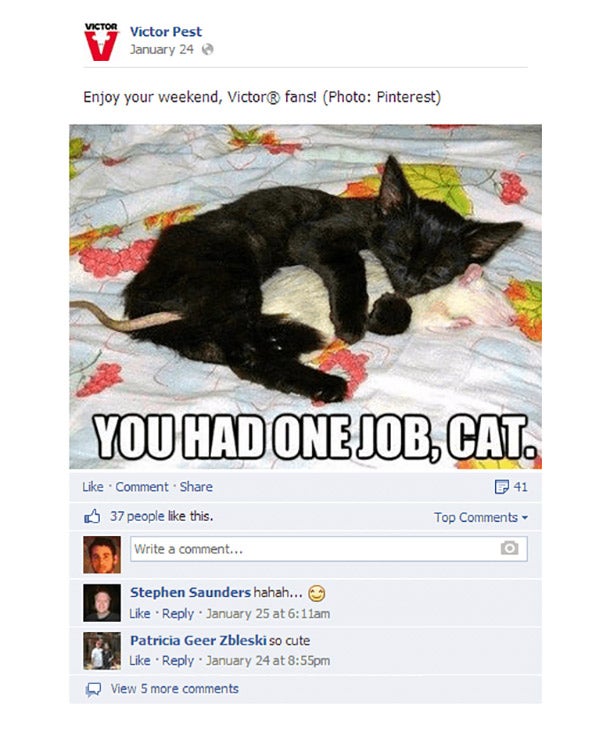 In this example, from the well-known Victor Pest, we'll notice similar themes in meme humor. This solidifies the model of classic Facebook posts: humorous memes with relevant ties to the brand (the cat and mouse duo for a rodent and pest control company). 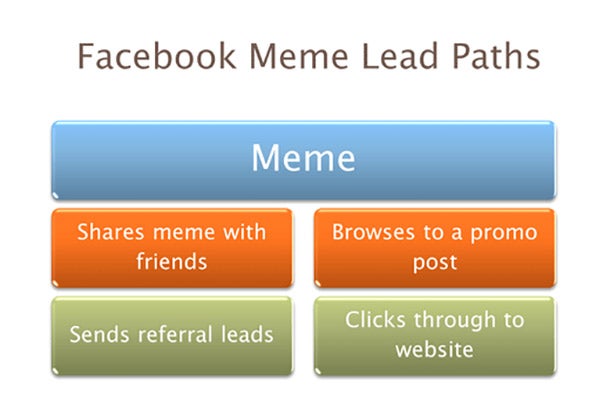 These are free and take little time to create. While promo budgets are used on deal/discount posts, memes have a higher chance of natural engagement. We subconsciously think of the brand while consciously enjoying the humor. The subconscious element sticks with us, just like receiving a free pair of socks or a personal, handwritten thank you card.

We've covered several clever and not-so-clever examples of marketing for e-commerce websites. These are the vital points we can apply to our future campaigns and strategies:

In your experience, which e-commerce site/brand has really rocked humanized marketing? Did any of them send you handwritten cards?