The launch comes at the worst possible time for TikTok.

By Karissa Bell
August 5, 2020
This story originally appeared on Engadget

Facebook is coming for TikTok. After months of tests, Instagram is finally launching Reels, its latest take on the viral app, which is facing an uncertain future as Donald Trump threatens to ban the service in the US. Reels, which has already been live in India and Brazil, is launching now in 50 countries, including the US, UK, France, Australia and Japan.

It's not the first time Facebook has tried to emulate TikTok, but Reels might just have the best shot at actually succeeding. That's both because it's already built into Instagram, Facebook's most popular app among teens, and because the social network has borrowed many of the dynamics that have made TikTok so successful in the first place.

Creating a reel is like creating a post for Instagram Stories. You can record a series of clips from Instagram's in-app camera, complete with music and AR effects. But Reels includes more sophisticated editing tools than what's available in Stories. For example, you can speed up or slow down your video, and there's an align tool for TikTok-style jump cuts. 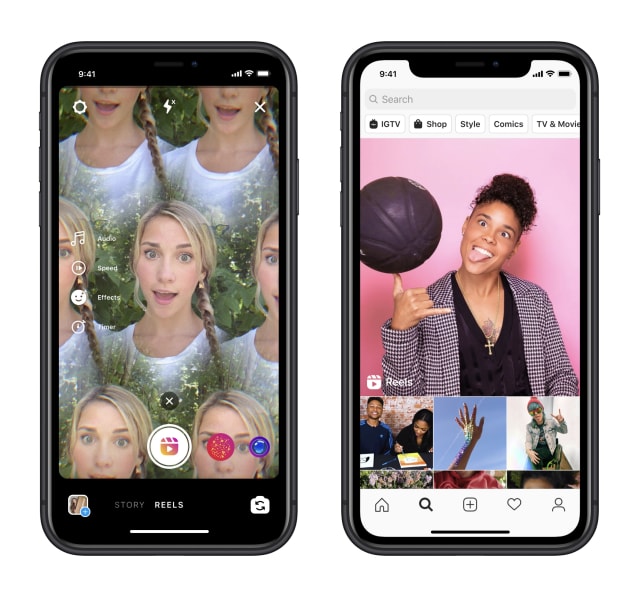 But the biggest difference between Reels and Stories is the way they are shared. When you upload a reel, it's automatically shared to the new Reels section of Explore, with the option of also posting it in your main feed. All the reels you create will also be viewable in a dedicated section of your profile, similar to IGTV posts.

The emphasis on Explore is key to Instagram's strategy.

One of the biggest differences between TikTok and Instagram is that on TikTok users' main feeds are driven not by their subscriptions, but by an algorithmically-generated "For You" feed. It's this personalized feed, filled with an endless stream of short videos, that makes TikTok so addictive. It's also what allows such a wide variety of content to go viral.

While a wannabe Instagram influencer can spend weeks or months trying to gain followers and figure out how to crack Instagram's Explore algorithm, previously unknown personalities can gain a following on TikTok after one video makes it to the For You page.

Instagram wants to bring this dynamic to Reels. During a press event with reporters, Instagram's VP of Product Vishal Shah emphasized that the recommendations will be separate from those that drive the rest of Explore, with a "creator-centric approach to ranking."

"We have not historically been very good at helping new creators find an audience," he said. "The pitch for new creators is that Reels is a way for you to get discovered. It's a way to find a global audience." 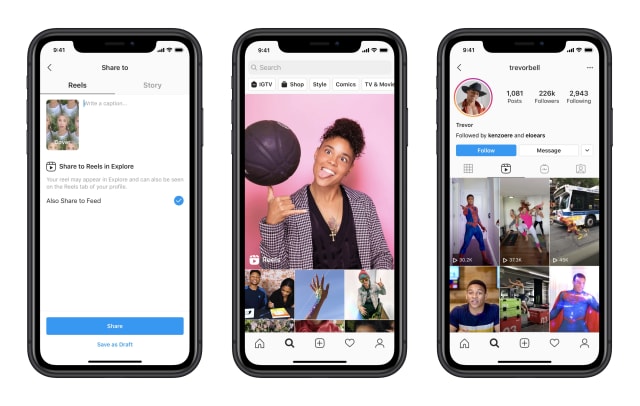 It's still unclear exactly how that will work, or how effective it will be. Shah said that recommendations for Reels will be "different than how we source content for Explore," but didn't provide specifics. Much will likely depend on the adoption of Reels, and if Instagram can get the same level of consistency as TikTok. (Facebook is reportedly throwing money at TikTok stars to lure them to Instagram.)

But if Instagram can both convince creators that they can reach new followers, and give Instagram users even more reasons to stay in the app, Reels might end up giving TikTok some real competition.

It also doesn't hurt that Reels is launching at the worst possible time for TikTok. Though Microsoft is still negotiating with ByteDance on a sale, Trump hasn't ruled out banning the app entirely. And many TikTok stars are already nervous about the app's future, and encouraging fans to follow them on other apps. Shah says the timing of the US launch "happens to be coincidental in some ways," though that's hard to believe. Facebook also happened to release Reels in India last month just days after TikTok was banned in the country.

TikTok's future notwithstanding, Reels follows a familiar strategy for Instagram. Just as Facebook spent years trying to copy Snapchat before it opted to bring Stories to the top of users' Instagram feeds, Reels borrows some of TikTok's most important features and puts them right in the middle of Instagram. And while we don't yet know if Reels will be anywhere near as successful as Stories has been, Instagram is making its TikTok clone impossible to ignore.