"Don't choose businesses that everyone else wants to start up because of the glam factor. Choose the businesses that people don't find exciting- these are the ones that are going to last." That was one of the many directives that H.H. Sheikh Maktoum Hasher Al Maktoum told a gathering of some of the UAE's top business leaders and entrepreneurs at a Learning Event held by the UAE Chapter of the Entrepreneur's Organization.

Facilitated by Entrepreneur Middle East at the Jumeirah Beach Hotel in Dubai, the event was conducted as an informal Q&A session between the Sheikh and Editor in Chief Fida Chaaban, and touched upon topics relating to the SME and startup ecosystems, developing and growing businesses, and the roads to achieving success in the MENA region and beyond.

Sheikh Maktoum -whose impressive resume includes titles like Chairman of Dubai International Holding Company, former Executive Chairman of Shuaa Capital, founding investor in Virgin Megastores and founder of A1 Grand Prix racing series- gave the audience an overview of the many business ventures he has dabbled in here in the region as well as around the world, with him singling out Dubai as being especially conducive to business and entrepreneurs. "Under the leadership of H.H. Sheikh Mohammed Bin Rashid Al Maktoum, Dubai continues to foster and promote entrepreneurship and enterprise growth," he said. "This is a dynamic community of businesspeople led by the most dynamic visionary of them all- an unparalleled success story. Dubai has become the epicenter of business in the Middle East."

But for all of the growth seen by large-scale businesses in Dubai, Sheikh Maktoum, recently appointed to the board of the Commercial Bank of Dubai, noted that for the Emirate to further scale up its success, it would need the support of the startup and SME sectors as well. "A successful city ecosystem stems from not only a consideration of the primary sector, but [the] secondary and tertiary sectors as well," he explained.

"Thus, SMEs and entrepreneurs are essential to Dubai's continued growth as the country's epicenter, alongside tertiary services and bureaucratic input from the government to stitch it all together." Of course, there are already moves being made in this direction, and the evidence for this, according to the Sheikh, can be seen in the current state of the Dubai ecosystem. "Current developments in infrastructure and construction are being executed in a far more sustainable, less risk-prone manner," he said. "Therefore, the city is now a far more fertile hub for investment."

When asked if Dubai's crowded entrepreneurial space currently made it harder for new endeavors here to establish themselves, Sheikh Maktoum rubbished the idea. "I don't like to do a business that has low barriers to entry," he said. "There's a lot of capital here- people want to set up businesses here... If you're going to get into a business, go into one where there are high barriers of entry." According to Sheikh Maktoum, entrepreneurs have to be resilient: "You don't give up- you have to be tenacious to a degree that you'll make a pit bull look like a poodle." Having said that, he advised against dragging along a sinking ship too- "If you believe there is no end to a problem, trust your instincts, and move on, if you must." 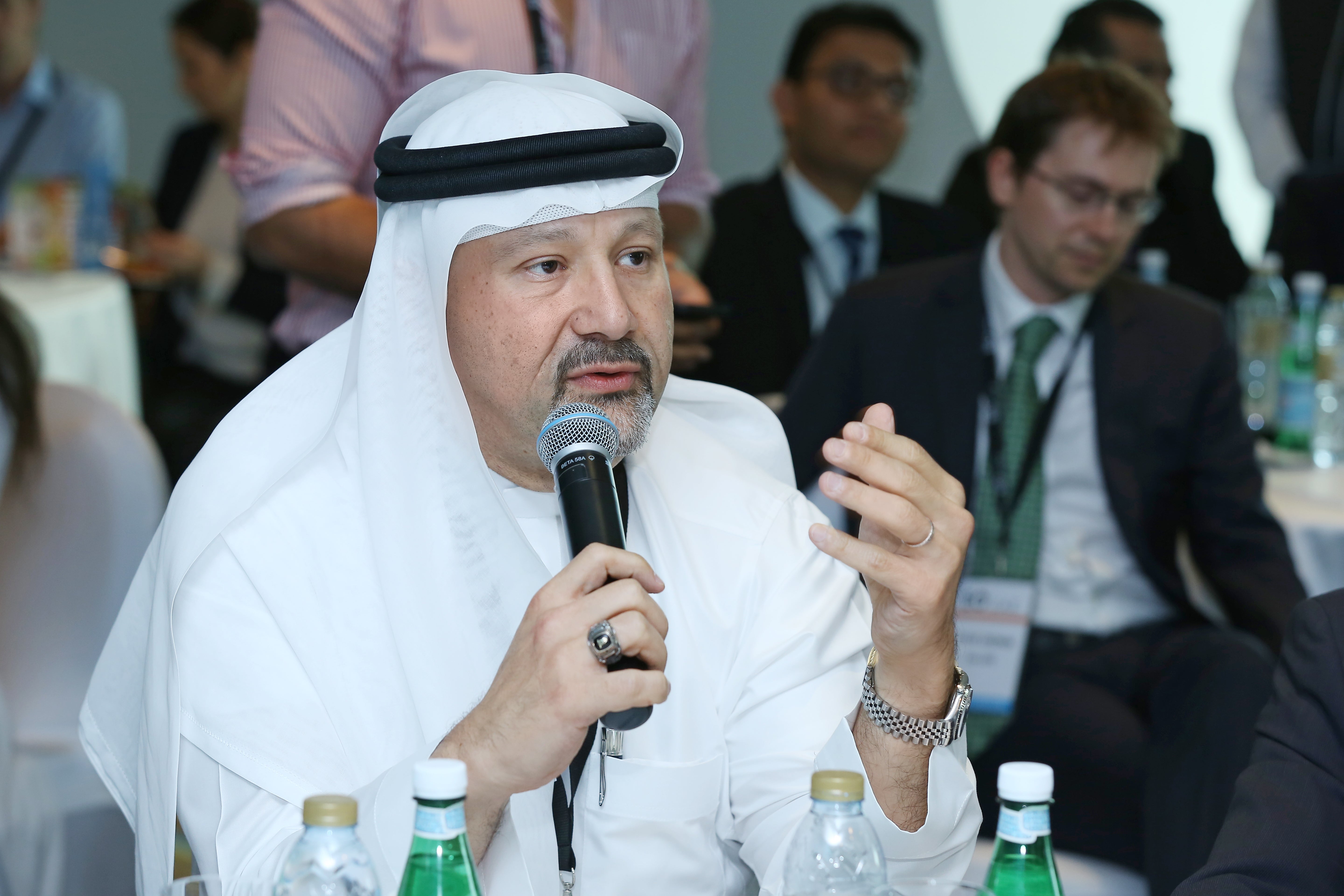 WHAT IS THE ENTREPRENEUR'S ORGANIZATION?
"This was truly an eye-opening experience for me and our respected members. H.H. Sheikh Maktoum Hasher Al Maktoum's staunch understanding of the city's landscape and the unimaginable level of effort that goes into his successful endeavors was not only commendable but fascinating." Vikram Shroff, President, EO UAE Chapter

The Entrepreneur's Organization is a dynamic, global, non-profit network of more than 10,000 business owners in 48 countries. Founded in 1987 by a group of young entrepreneurs, EO is the catalyst that enables entrepreneurs to learn and grow from each other, leading to greater business success and an enriched personal life. EO members create a constant flow of news on a daily basis, all of which speak to their commitment to entrepreneurial excellence. 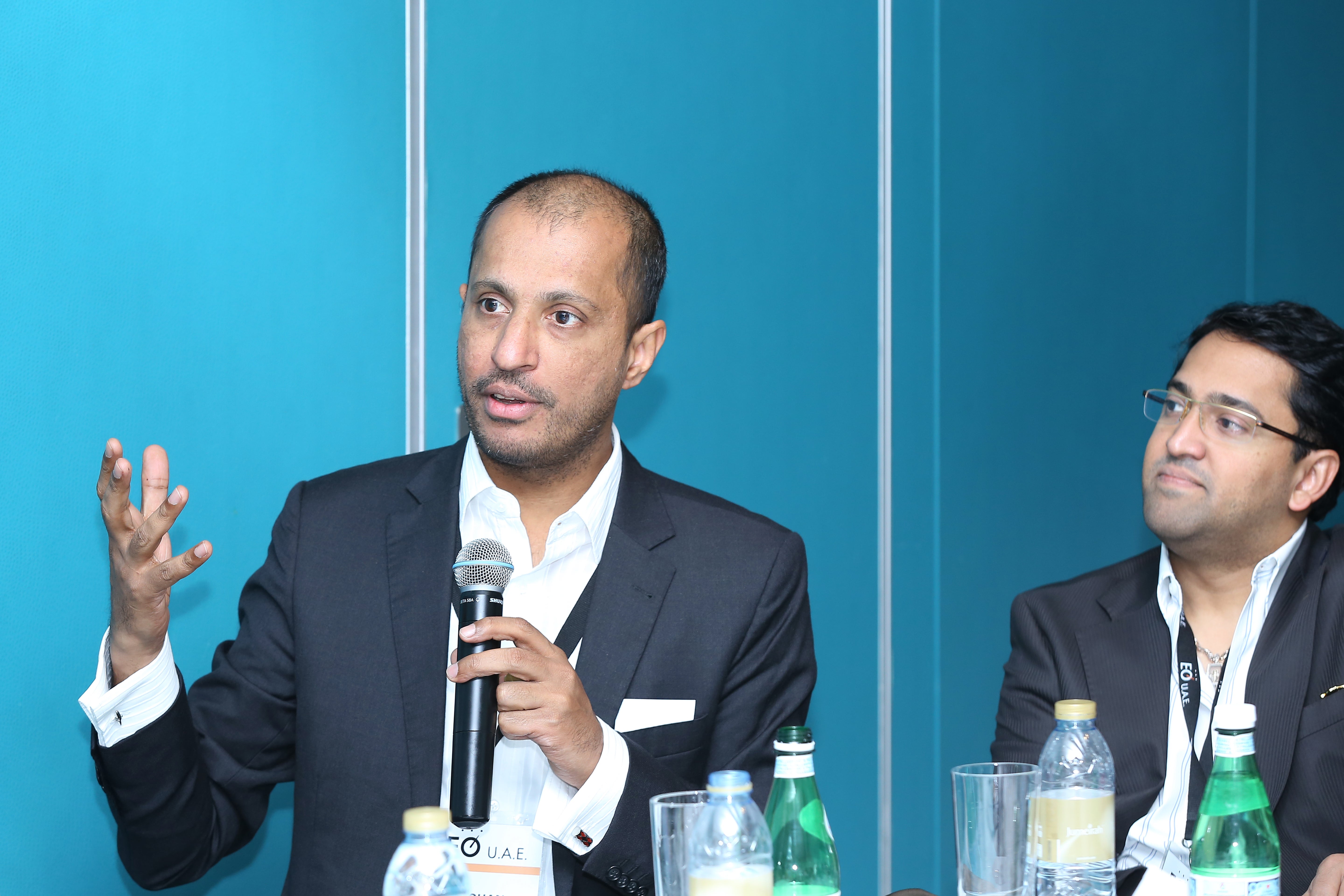 "TREP TALK
SHEIKH MAKTOUM HASHER AL AL MAKTOUM'S TIPS FOR DOING BUSINESS
First, do not be risk-averse. Instead, believe in risk reward. In doing so, entrepreneurs should consider approaching uncontested market space with higher barriers to entry, however, due diligence and stress testing remains key. Sheikh Maktoum exemplified this by detailing his own ventures in East Africa such as hydropower and mineral mining, which although fruitful, took a considerably long time to set up. Second, consider stable, more viable businesses over and above exciting ones. Although it may be popular to chase competition, sometimes more traditional, less exciting endeavors may be far more profitable and less stressful.

Third, consider giving sweat equity and construct good incentive models for employees. In order to keep costs low and heighten personal investment in their work, offer employees the ability to become an active stakeholder in the company. Lastly, accrue your salary and self-evaluate your own worth. Before diving head first into an independent business, consider speaking to a headhunter in order to gauge your own financial worth, thereby setting a benchmark for your company and future decisions.

Is This Contract Valid?