"Now, I think, is the right time to be an entrepreneur. When everything slows down, you open your business- it's the best time. Suppliers will be more flexible, payments will be better, office rents are going down- setting up something new, [the time to do that] is today." At a time when there seems to be a lot of questions being asked about the economic stability of the UAE and the wider Middle East, the above statement by AJSM Investments Chairman HH Sheikh Saeed Obaid Al Maktoum puts a different spin on the conversation in the region- and it's safe to say that wannabe entrepreneurs would be wise to take note of this seasoned businessman's words. As the man leading a company with interests in sectors as varied as real estate, technology, F&B and pharmaceuticals, Sheikh Saeed knows a thing or two about doing business in the UAE- AJSM Investments has been seeing rapid growth since its inception about four years ago, with revenues increasing by 80-100% in Sheikh Saeed has a calm, charming demeanor, but when he talks about anything relating to entrepreneurship, his passion for the subject is almost tangible- it's clear that this is someone who is eager to see more entrepreneurs rise up in the UAE. "Starting your own business –given all the facilities that you have around today- it's 10 times easier to do it now than it was 20 years ago," he notes. "The government is pushing for it, the services are there- it's so much easier than before." But shouldn't one be concerned about the uncertainty in the market right now? Sheikh Saeed dismisses this contention, and points our attention instead to the advantages inherent in the current financial climate for the entrepreneur. "Failing today is less [of a risk] than failing in two or three years' time," he says, smiling. "It will cost you less!" In addition, Sheikh Saeed also explains how starting up a business, say, three years later as opposed to now doesn't offer any guarantee of ease in the entrepreneurial journey ahead- according to him, the process (and the costs involved) will only get tougher in the years to come.

AJSM Investments came into being after Sheikh Saeed and his four siblings decided to bring their respective family businesses together as one unit. Besides the "greater good" associated with pooling these companies together, Sheikh Saeed noted how coming together also allowed them to make bigger investments than what they'd be able to do previously- and thus enable better returns as well. Real estate development was at the core of the business when AJSM Investments started out, and it remains an integral part of the company today, but diversification efforts are well underway, as is being showcased by its move to start a pharmaceuticals factory producing generic medicine. Sheikh Saeed is also particularly interested in the tech sector- one of AJSM Investments' ventures in this space has been working with Idea Prodigies, a software development firm, to develop an app called MyHUBBER, which has been billed as "a multi-purpose mobile and web application for social networking, classifieds, and shopping." Besides the app (which is expected to launch by the end of the year), Sheikh Saeed is also hoping to launch an Islamic crowdfunding website as well, tapping it as a platform to both fund businesses as well as to facilitate Islamic charitable giving not just in the MENA region, but around the globe.

But his own ventures notwithstanding, Sheikh Saeed is also keen on facilitating the development of an entrepreneurial community in the UAE. This man is eager to see more startup enterprises in the market, and he's putting his money where his mouth is- AJSM Investments is starting up an initiative called AJSM Hero to help nurture new businesses in the UAE. One part of the program is targeted toward university students, which will see them, over the course of a month, put forward business plans that will be evaluated by a jury put together by AJSM Investments, following which the winning idea(s) will be rewarded with both funding and coaching from the company. In addition, the AJSM Hero campaign will also be soliciting ideas from entrepreneurs out of school- this, however, will be done on an ongoing basis through the year. Sheikh Saeed says the contest will be open to entrepreneurs of all nationalities based in the UAE, with the reasoning being that the expat community doesn't have as many programs catered to them as Emiratis. "Emiratis have at least four or five initiatives from the government helping them, but non-locals don't have anything," he notes. "So we concentrated on that sector specially, so as to give back- non-locals are residents here, they are a part of our community, they are giving back, and so we have to support this part of the community also, not concentrate on only locals. Yes, I'm a local and I'll support locals, but we are all one. Dubai is a multinational city, a cosmopolitan city… So why not help everyone? And this is the neglected part here, and so we are trying to contribute in our way."

Related: Are You Cut Out To Be An Entrepreneur? Ask Yourself These Eight Questions But this competition is just the start of what Sheikh Saeed envisions with AJSM Hero- today, it's an initiative that's being spearheaded by AJSM Investments, but Sheikh Saeed hopes that AJSM Hero will evolve into something larger that the entire private sector in the UAE can get behind. "We are trying to build it up slowly into, insha'allah, some kind of foundation that all private sector enterprises can be a part of," he says. "They can help not just financially- actually, coaching is more important than anything else. Most entrepreneurs go into a world that he does not know anything aboutand so when he has the support and expertise of other people, he'll have that to back him up." According to Sheikh Saeed, the importance of coaching and mentorship cannot be understated, when it comes to nurturing entrepreneurship in the UAE. While there are quite a few programs already being initiated in this regard, Sheikh Saeed notes that there's a need for coaching that extends beyond an enterprise's launch phase. "I think, personally, the right time to help someone is not in the beginning- it is actually [more needed] when they are about to fail," he says. "Maybe it's a year ahead, or two years ahead, if he or she faces a problem, then start something with them. Keep following up. If he falls, pick him up. Help him. Guide him. Coach him. That's the most important time- because if he falls and does not find someone there [to help him up], he will stop."

Given his own experience in the business world, Sheikh Saeed is emphatic on the need for entrepreneurs to have a good support structure, be it in the form of family, friends or peers in business. "In the beginning, I was lucky," he recalls. "I had a very supportive family. I failed quite a bit in a few small businesses at the beginning, and every time I failed, they were there for me. They were like, "Don't stop, do something else, make it better." So I always had support. And this is the best feeling, I think, you can have as an entrepreneur- having someone behind you, having your back. If you fall, someone will pick you up… The satisfaction one can get out of this is one of the best feelings you can have, and if I can, in some way, help even 1% of the community with something like this, I'll be more than happy." At this point, I quiz Sheikh Saeed on what's his personal motivation to want to do things like this- what does he actually get out of supporting and encouraging entrepreneurs in the UAE? I'll admit here that I was expecting a standard corporate response from him on this, but Sheikh Saeed's rather innocent answer took me off guard. "Making people happy makes me happy," he says, in a matter-of-fact way. "I find happiness from seeing other people being happy." It's a simplistic statement, true, and one can argue that it is a bit naïve to even think that with respect to the business world. But it's clear that Sheikh Saeed strongly believes in this notion of his, and given the current disjointed nature of the UAE's entrepreneurial ecosystem, maybe such a sentiment is what is required to bring it together as a more cohesive whole- and yes, the community will only be the better for it.

Related: Three Hurdles Arab Entrepreneurs Face In Gaining Access To Capital (And How To Get Past Them) 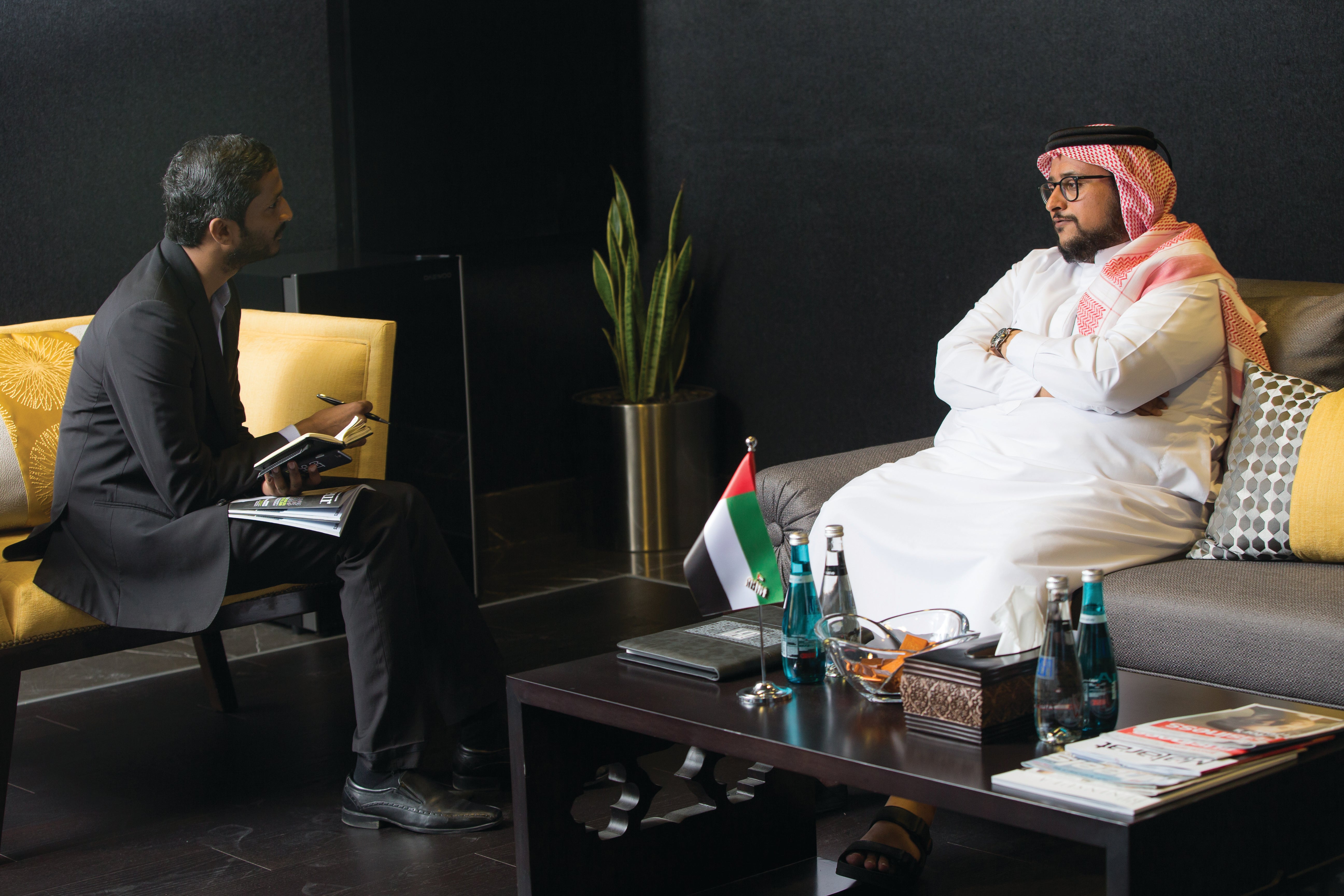 2. Look before you leap "Take risks, yes, but take calculated risks. Because having smaller leaps [in terms of risk] will have lower costs, should you fail."

3. Don't try to go at it alone "Hire the right talent and staff- it is the most important thing. An entrepreneur always has to build a good team, so that they can work together. One hand cannot clap. Don't be a one-man show."

4. Be ready for the stress "Look into ways by which you can manage your stress. Being an entrepreneur is a 24-hour jobit's not like you go to your job, do your work, at 5, you're home, and you forget about it. With entrepreneurship, you are involved 24 hours."