By Alex Malouf
July 4, 2017
Opinions expressed by Entrepreneur contributors are their own.
You're reading Entrepreneur Middle East, an international franchise of Entrepreneur Media.

It's here. After months in the works, the UAE's Ministry of Economy has released the first details of what has been dubbed the CSR law. The new legislation, which is part of the country's "Year of Giving" strategy, aims to promote corporate social responsibility among businesses operating in the UAE.

In mid-June, the Ministry of Economy announced 11 CSR initiatives. These include:

At first, the news was reported as a CSR tax, which wasn't accurate as the legislation is voluntary for most companies. In other words, SMEs can opt-in. According to the Ministry, disclosure will be mandatory only for large companies. There will be no minimum spending or donating to charities as a percentage of revenues, such as was introduced in India in 2014. Section 135 of India's Companies Act makes it mandatory for companies of a certain turnover and profitability to spend two percent of their average net profit for the past three years on CSR.

What the government hopes the legislation will lead to is a significant increase in engagement with, alignment for and support of the country's developmental, charitable and humanitarian work, both through monetary, in kind donations and volunteering. The UAE's government has adopted an approach that uses both reputation and reward to promote corporate social responsibility. 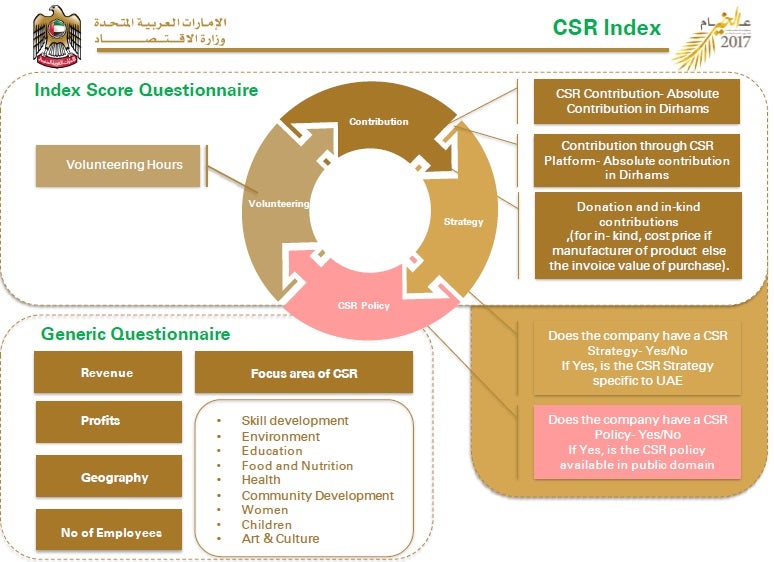 Reputation will be supported through:

Whilst I don't have much information on the rewards, what I can say is that companies awarded a CSR label, CSR mark, or a CSR passport will benefit from a 5% positive weightage in the tendering process for government contracts, free extensions for business licenses, and priority in requesting government services.

And now to the measurement piece. Corporations will be rated based on a set of four criteria, including CSR policy, CSR strategy, and volunteering and contribution, either financial or in-kind, as per the scheme below. There is still no word as to whether CSR outcomes will be measured, rather than just outputs. The focus areas are UAE-tailored, and auditing will be undertaken presumably either by an independent auditor, or by both the Ministry of Economy and an independent auditor.

The process will begin in July, and businesses will have to register at www.csruae.ae to join the initiative. It's still too early to tell how this will pan out, but here's hoping we see more UAE businesses spearheading social initiatives in the country- that'd be something to watch out for.

Related: The Importance Of CSR And Volunteerism In Boosting Your Team's Morale