Not only does this acquisition open up new dimensions for Thmanyah, it also opens up a world of possibilities for other media companies and publications that were born in the region.

By Sharifah Alhinai
August 9, 2021
Opinions expressed by Entrepreneur contributors are their own.
You're reading Entrepreneur Middle East, an international franchise of Entrepreneur Media.

This article has been co-written with Manar Alhinai, co-founder, Sekka.

Just before the Eid Al Adha holiday in the MENA region, Saudi Arabia-based media company Thmanyah announced that 51% of its shares had been acquired by Saudi Research and Media Group (SRMG), a leading Saudi media group which has under its umbrella publications such as Arab News, Independent Arabia, and Asharaq Al-Awsat, for SAR33.3 million. The announcement was welcomed with hundreds of congratulations by followers of Thmanyah's social media pages, and we were at the forefront of these well-wishers.

Since its founding by its then 28-year-old Saudi CEO and Editor-In-Chief Abdulrahman Abumalih in 2016, Thmanyah (which literally translates to "eight" in Arabic), has positioned itself as a new media company that aimed to change Arabic journalism as we knew it. And with time, it lived up to its mission statement. Over the years, Thmanyah has produced distinctive, simultaneously informative and entertaining content that has ranged from podcasts like Fnjan, which features interesting Arab personalities, and Ashya Ghayaratna, which examines Saudi Arabia's modern history in a new lens, to high quality short documentaries about the lives of Edward Said, Malcolm X, and more, as well as scholarly-like articles on a variety of well-researched topics by writers from the Arab world. 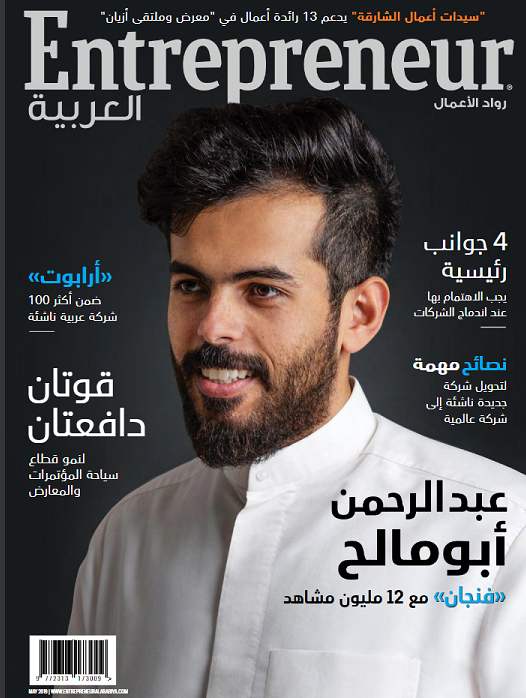 Abdulrahman Abumalih was on the cover of Entrepreneur Al Arabiya's May 2019 issue.

And with its largely Saudi youth led team, Thmanyah has been able to attract millions of content consumers from all around the Arab world and beyond, who have been hungry for fresh content like theirs that is skillfully and creatively presented in an accessible and enjoyable manner, and which stands in stark and colorful contrast to the often bland, one-dimensional approach of many older Arabic media platforms and outlets that have not yet evolved enough to attract a new generation of consumers. As such, the announcement of the acquisition of 51% of its shares came as no surprise to us. Thmanyah has, for nearly half a decade, been a successful and inspirational award-winning platform that has been able to cleverly reel in the Arab region's diverse population, including its large youth segment, and has got them (re)interested in journalism, which, as we know from our own experience in media, is a far more easy feat. For us, it was just a matter of time before Thmanyah opened a new chapter like the one it opened recently with SRMG.

But not only does this acquisition open up new dimensions for Thmanyah as it announced via a special video it shared on social media about the future of the company post-acquisition, it also opens up a world of possibilities for other media companies and publications that were born in the region. The last decade, in particular, has witnessed an increase in the number of homegrown independent regional digital platforms and publications that cater to the new generation of Arabic readers that are interested in consuming content that resembles them and represents them, and that do so through the mediums and channels they are tuned into most in the digital world. And many of these independent initiatives, which fill a gap in the regional media, understand how to do this so well, because they are part of this new aware, tech-savvy generation as well.

Yet, what has been lacking for many of them is a practical way forward in a world where being in the media is a tough business, despite its potential influence and power. This is one of the main reasons why we see many new media companies and publications shuttering their doors after a relatively small time in the field, despite an initial job well done. In countries such as the United States, many media companies were able to grow even more after acquisitions by bigger companies with even more resources. A case in point is The Huffington Post (now known simply as HuffPost), which was taken to new heights- from an American blog and news aggregator to one with numerous international editions- after its acquisition by New York headquartered web portal and online service provider AOL for US$315 million a decade ago.

But there are many more examples, and that is exactly the point. The normalization of such acquisitions can encourage the birth of more and more media companies, as it reassures (potential) founders of the value of their work. And the emergence of many media companies that compete with each other to do the best job benefits the media landscape by taking it to new levels, as well as caters to the diverse consumers and keeps them informed. Thus, SRMG's acquisition of Thmanyah -in a part of the world where the acquisition of media companies is not something we are not yet used to- forms an endorsement and appreciation of Thmanyah's valuable, game-changing contribution to the regional media landscape.

In addition to that, it also showcases faith in the youth's work and efforts given that Thmanyah is a youth-led media company: Abumalih is only 33 years old today, and many of the Thmanyah team members are in the same age group. This places SRMG amongst the region's diverse array of forward-thinking companies, institutions and bodies, an example of which is the UAE's Ministry of Culture and Youth, amongst others, who believe strongly in the youth's capabilities and power, and support them, because they know that they will be the leaders of tomorrow, and in the case of media companies, have the power to tell our stories in our own voices to the world, and influence it.