By Pamella de Leon
August 5, 2015
Opinions expressed by Entrepreneur contributors are their own.
You're reading Entrepreneur Middle East, an international franchise of Entrepreneur Media.

Last year, Swedish organization STHLM Panda posted a social experiment video wherein only one out of 53 people reacted to a staged domestic abuse scene in a lift. The video, along with other alarming statistics, triggered a team of University of Wollongong in Dubai computer science students to use their skills in creating something to support the cause against domestic violence. Noticing how witnesses fail to raise their voice for fear of safety or simply not knowing what to do, the trio -22-year-old Heba Mahmoud Nayef as team leader, 20-year-old Jawad Jandali Refai as front-end developer and 23-year-old Artaza Aziz as full stack developer- developed an mobile phone app called VioLens that allows eyewitnesses to report an incident in real-time.

VioLens allows both victims and bystanders to take anonymous audio or video clips of an abusive incident, which are directly sent to the requisite authorities with a time and location stamp. "[We] wish to provide the relevant authorities with a system which allows them to witness the audiovisual clips, understand more about repeated abuse and to respond more effectively to distress call situations, offering them access to critical demographic data which will help the authorities to identify risk-prone areas and provide improved tracking and control," explains team leader Nayef. She also adds that victims will also be able to access information on hospitals, women's shelters and police stations, as well as having the option to chat with an online counselor. One of its main setbacks is that the app can't be downloaded unless the authorities of the country decide to adopt it to the justice system, which means partnering with local authorities is a significant step for the app to be utilized. Anonymity is a factor that VIOLENS is focusing on as well. 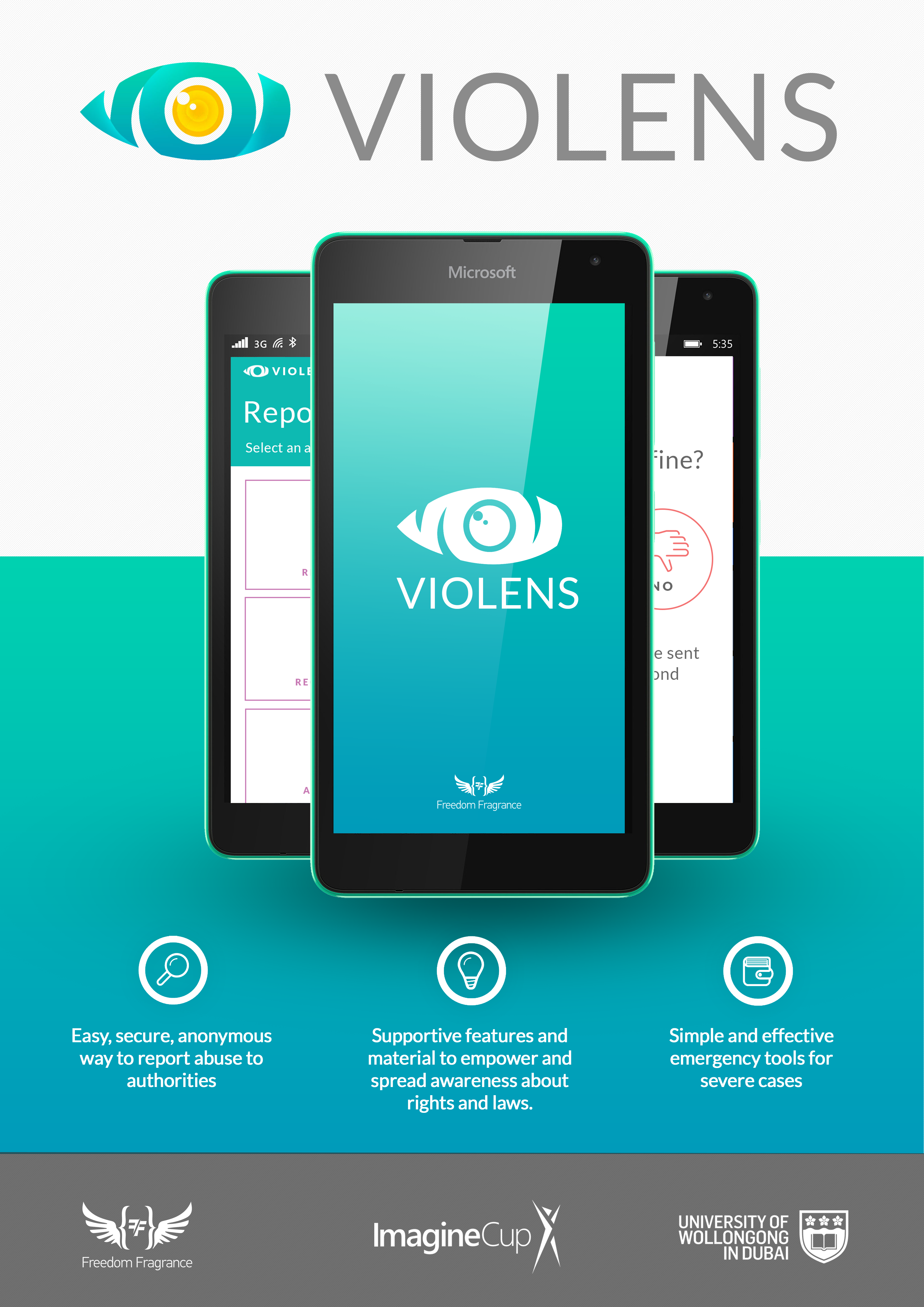 Besides the legal constraints in the UAE of posting audio-visual content of people without consent, the team doesn't believe that public shaming is not the solution and seeks to protect the privacy of both the witnesses and victims. "One of the big challenges was creating the app's interface, as it needs to be as anonymous as possible on the user's phone- both for victims and bystanders. They need to be protected both while reporting the abuse and using the application."

Having won the Microsoft Imagine Cup 2015 UAE, they also went on to win the Microsoft Imagine Cup 2015 Pan Arab in the World Citizenship category in April this year. The app is now in the final phases of development for Windows platform, with iOS and Android next up, and the team is seeking investments and looking to build partnerships. They're hoping to establish a relationship with the Dubai Police and other UAE authorities while seeking support internationally. 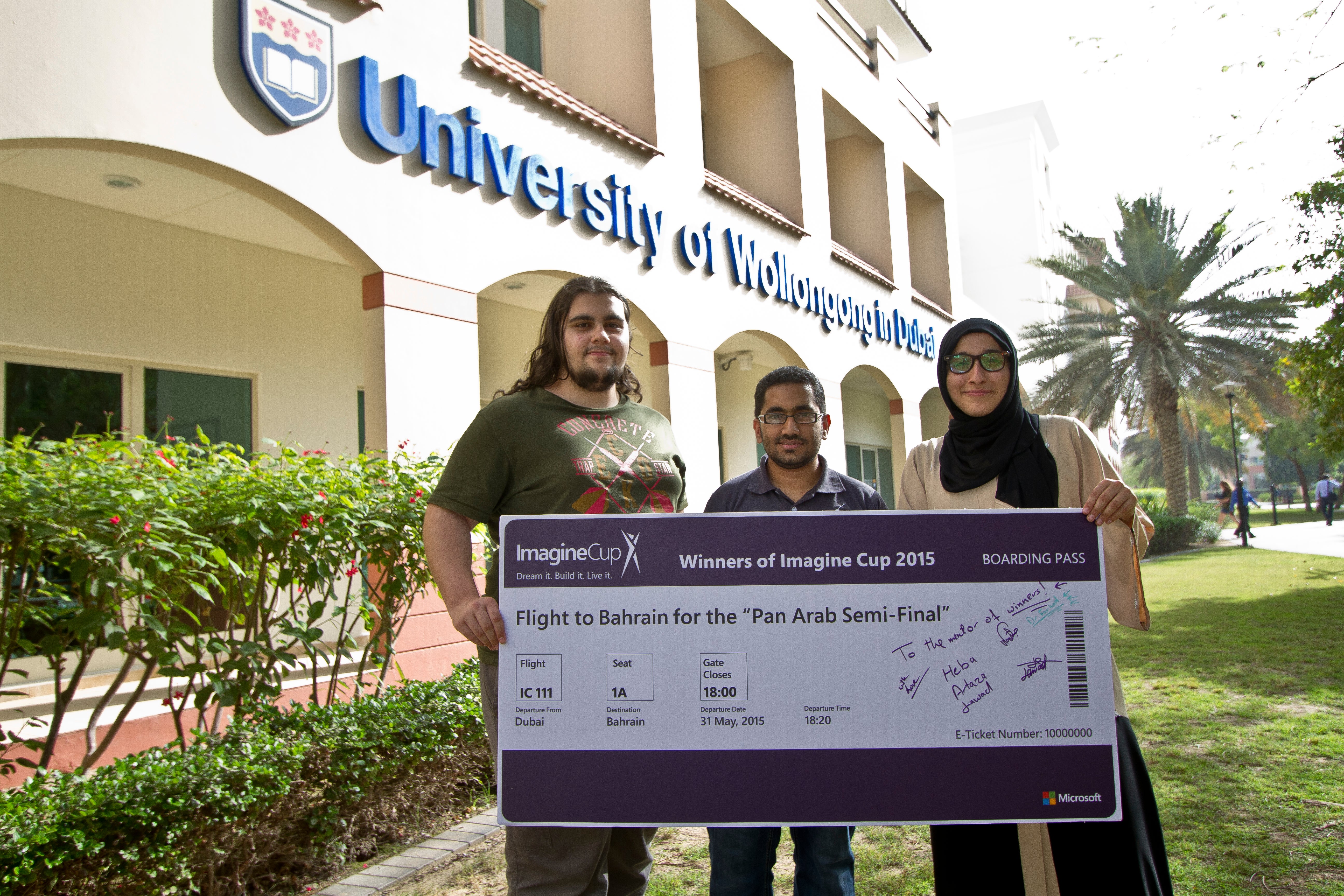 The Creators of VIOLENS
SAAS FOR GOVERNMENT ENTITIES
"We are operating a Software as a Service (SaaS) model for the government and relevant authorities. The app will be free for users but the data the app provides has a monetary value for the authorities as it will provide them with more of an understanding about incidences of repeated abuse, the ability to respond more effectively to distress call situations and demographic data which will help the authorities to identify risk-prone areas and provide improved tracking and control. It will help Dubai in particular with its efforts to become a Smart City."