LeverageEdu, and as Akshay also admits, hasn't discovered anything new but is innovating on the experience across multiple stakeholders

Akshay Chaturvedi is an animal of hustle. That's how one of his board members describes him, referencing Paul Graham of YCombinator's famous cliche on "beast/ obsessive founder". Playing all in all day all night long. His long wooden room right at the center of LeverageEdu's three-floor 1500-seater HQ in Noida is a scene right out of the Hollywood movie Beautiful Mind or Wolf of Wall Street, whichever you choose to remember. There are a gazillion numbers, funnel flowcharts, and insights written in both English and Hindi, across every possible wall of the room. And then there are white chart papers across a stretch, columns stacked with names of unfamiliar localities across India, and more numbers below them. "I like writing a lot, this serves as our War/Let's Get This! room", says Akshay Chaturvedi. For this interview, he used a green marker and explained things while drawing on the table we sat on. He uses the words "student-first" and "consumer insights" over and over again. The obsession is impossible to miss!

As you climb up the stairs, a big board stares right at you, it has about 50 odd faces, and is titled "Owners at Leverage". I began my first question by asking what's that? "We are very intentional about treating people well, they are the soul of this company. At the same time, there has to be a meritorious call out for those who excel, and hence we have awarded ESOPs to our top 5-7% team base. Of course, we want more folks to grab it up!" While ESOP rewards aren't anything new, how they are celebrated at this company is definitely rare. Interestingly, the company likes to use the word team/teammates and not employees, a proud Leveragian tells me. Another staircase up, there are another 100 faces beaming up, winners of Leverage's famous TGIS events.

Akshay has also become a minicelebrity on the Internet this year, with these "Thank God It's Saturday" aka TGIS shows, a weekly ritual where over a thousand teammates gather on a single floor to celebrate, reward those who aced that week, talk about mission & what numbers tick, and a tete-a-tete townhall with the founder himself. Every single week. Without default. If it wasn't evident that this is a fast-growing startup, it wouldn't have been a mistake to imagine it as a cult. Others inside and outside the company describe Chaturvedi as a modern-day Tony Hsieh, founder of Zappos (sold to Amazon), famous for building an extraordinary culture and writing the book "Delivering Happiness".

LeverageEdu, which Akshay first started in 2017, had a slow start. It wanted to target mass colleges but found no takers for there was little differentiation in the value proposition. So in month 3, the business was pivoted into an Ivy League college counseling service, run via a mentor marketplace - you want to go to Wharton, Leverage gives you Wharton alums and takes a cut. A year later, with a bag full of big admits, it went back to its original avatar and this time the Universities started to bite. However, it wasn't until late 2019 and finally 2020-beginning, that Universities warmed up to a digital player, students warmed up to taking a decision as important as their higher education digitally and Leverage started to scale. Two years in, Leverage had grown from serving 100 students a year to 100 a month. It also kept building across a trifecta of content, product and community - launching a massive content factory that now gets over 9Mn organic traffic a month and hit 100k+/month products like AI Uni Course Finder, UniConnect Virtual Fair, and its latest apps - Study Abroad with Leverage Edu & Leverage IELTS, the former clocking about half million downloads and the latter trending #1 on Product Hunt at launch. LeverageEdu's international student communities are the largest of its kind, seeing 7000+ posts/reactions every single day, discussions ranging from finding chhole bhature in Manchester to finding the right Professor to grade thesis papers in New York! At its Series B earlier this year, when the company raised a $20Mn+ round that valued it at over a hundred million dollars, it was serving 1000 students a month ~ that number, has scaled to over 4000 today, in just over six months, while the company also claims having turned unit profitable with its latest September intake. It said it will be crossing $50Mn in annualized revenue coming quarter. Part of this growth is coming from diversifying into other geographies like sending students to Australia, and from Nigeria and Nepal too; while part of it is coming from adding other margin accretive services that Leverage is adding on its platform, starting with financial services and accommodation. Worth noting the company recently received its forex license from RBI and aims to launch a debit card offering for international students in the UK.

When asked what made Akshay decide on a content-first strategy at the beginning, evolving into a full-stack approach earlier this year, his answer remained the same as what it had been for the last couple of questions too, "we learn from our students, we obsessively engage with their journey, and learn from every single thing they do and don't do". After the interview ended, I was told Akshay takes a day every week shadowing someone at the company's 1500-odd workforce, including making calls, so the learning from customers bit added up.

Akshay believes companies should be mission-driven. His parents migrated early on, so he grew up respecting "migration" and "access to education" all through his growing up years, he shares. At 18, he joined AIESEC and fell part-love with people moving across borders to change their lives. At ISB Hyderabad, where he went for his MBA in 2014, he was a Director of the Student Board, helping run Admissions and attracting African and East European students to India and to ISB. It all connects, even more so when he talks about what he wants to build Leverage into. "We will always stay missionary, that's the core of who we are - operating with empathy for every student. Sure we will make mistakes as a super ambitious bunch, but we care, and that's what will continue to truly set us apart", Chaturvedi says. 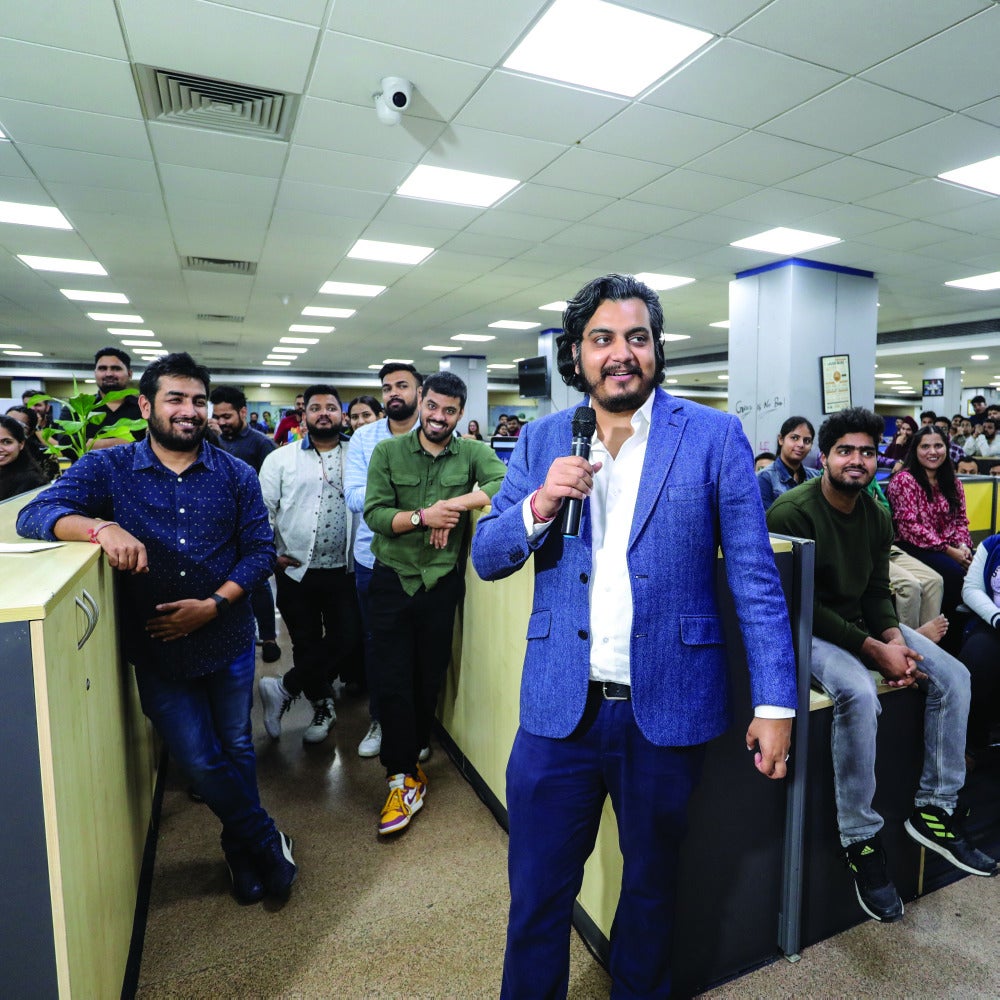 "Trust is everything. I come to work every day thinking I need to earn a little more of it, and also teach my teammates to value this above all else," he adds. What's next, I ask him. He smiles and says "sar jhukao aur kaam karo" - meaning just head down and execute. "What if you build a company that puts the student at the center of everything? That tells a student that the outcome is not a degree but the job you get out of it. Or the many other opportunities for the future. What if you give visibility to these outcomes on day 0? What combination works better ~ across a given mix of University X Program X Country? What if you connected these students to tens of thousands of other students like themselves in an open community, and directly to Universities, to alumni? Well, we have built that, and then some more. A beloved, trusted, personalised career platform that can enable students to become global citizens of the future," exclaims Akshay, now short of breath, at the peak of his energy that is often cited by almost anyone who knows him!

LeverageEdu, and as Akshay also admits, hasn't discovered anything new but is innovating on the experience across multiple stakeholders. We chatted with some traditional competitors, who say Akshay has also had it relatively easy given all the capital he raised. We asked him that question. "For our first seed INR 2 Cr round, I reached out to 88 individuals and had 22 come together to put together that amount. I would hear a No every day, and while a few were with no rhyme or reason, most of them taught me something and helped me take the next step ahead". Akshay has since raised about INR 300 Cr from a clutch of investors all over the world. Did he ever think about building the business bootstrapped like a lot of his traditional peers? "I most definitely get charged up by the sheer size of this opportunity, and I want to play with a large lens, play the long game, of taking this to a large outcome that will create success stories across thousands of investors and teammates; the route I take to achieve that is secondary". That prompted me to ask if they would like to IPO? "Of course!", came the answer, in a fraction of a second. "For me, the idea of building India into a global power like none other sits very close to heart. What a lot of people don't realise is that these Indian students remit hundreds of billions back into the country, which forms by far the highest source of FIIs for India. Plus of course, they help us build our soft power, from leading the biggest companies to senior political roles the world over".

Edtech has seen its share of glory and disdain. Asked about unicorn ambitions, Akshay says, "We are 100% not obsessed with valuations at Leverage, I would rather achieve the billion-dollar tag on a public market than in the private market." What this Prince of Study Abroad does in a jungle that has been heavily dominated by regional Kings is yet to fully unfold, but one thing is for sure, Akshay is truly playing the long game, with a full heart.