The Valuation Game: What Really Happens?

Zomato's valuation, for instance quadrupled in 2014 to $600 million and further jumped to unicorn status in 2015.

By Sandeep Soni
September 24, 2017
Opinions expressed by Entrepreneur contributors are their own.
You're reading Entrepreneur India, an international franchise of Entrepreneur Media.

Term sheets are misleading, particularly clauses including liquidation preference, ratchet, and affirmative rights that can jack up the valuation of a company.

This gets brutal in the aftermath of disappointing-to-no-growth at all that hurts everyone including employees, flushing down the value of their shares. So can it be "negotiated' at a fair market value (FMV) to keep valuations real or FMV is just a myth? Zomato, Snapdeal, Hike, Flipkart, are few cases in spotlight that had jump in their valuations, not an incremental rise.

Zomato's valuation, for instance quadrupled in 2014 to $600 million and further jumped to unicorn status in 2015. Though last year it got devalued by half to around $500 million. Snapdeal's valuation jumped by almost $2 billion in February 2016, in just seven months from the preceding round.

It is even more surprising that chat messenger Hike turned unicorn in just 43 months, around half the time taken by Quikr, Zomato, and Snapdeal.

A related study conducted by a faculty at the University of British Columbia and the Stanford University gives a perspective around inflated valuations. 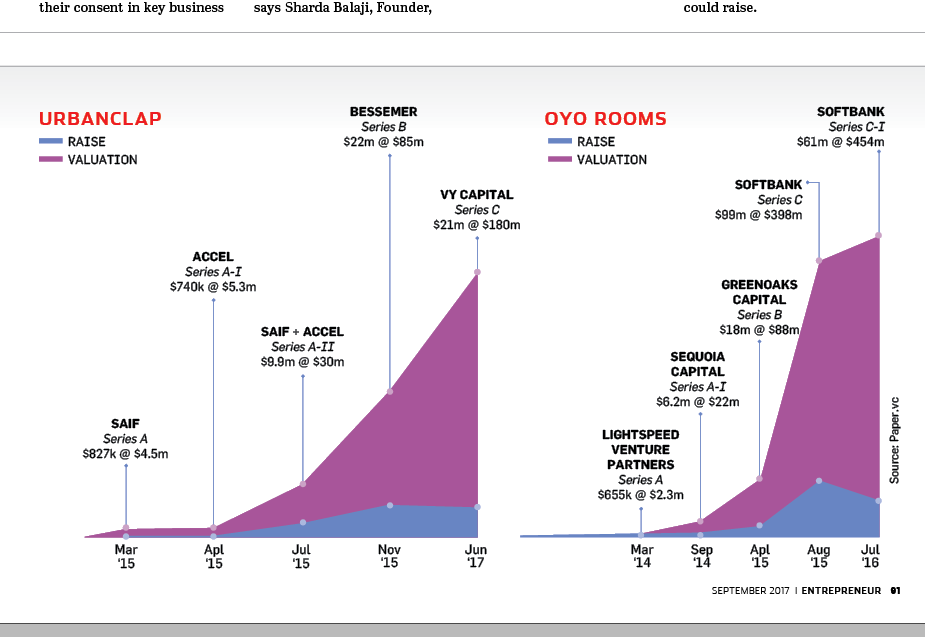 "An average highly-valued venture capitalbacked company reports a valuation to be 49 per cent above its fair value. 53 out of 116 companies valued above $1 billion lose their unicorn status when their valuation is recalculated; 11 companies are overvalued by more than 100 per cent."

This suggests that businesses use clauses like liquidation preference, which helps to increase valuation, by allowing an investor to get back the amount they had invested in the company, in case of a liquidation event.

"These clauses are a special right and to that extent an entrepreneur would like the valuation to be more. It is completely a risk-reward equation. As an entrepreneur, when you give these rewards to the investor in each stage, the value of the share also goes up. So valuation will be high not because you want to increase the valuation but because of the risk-reward equation," says G.Srinivasan, Former VP, Wipro Finance and Co-founder, Dawn Consulting. 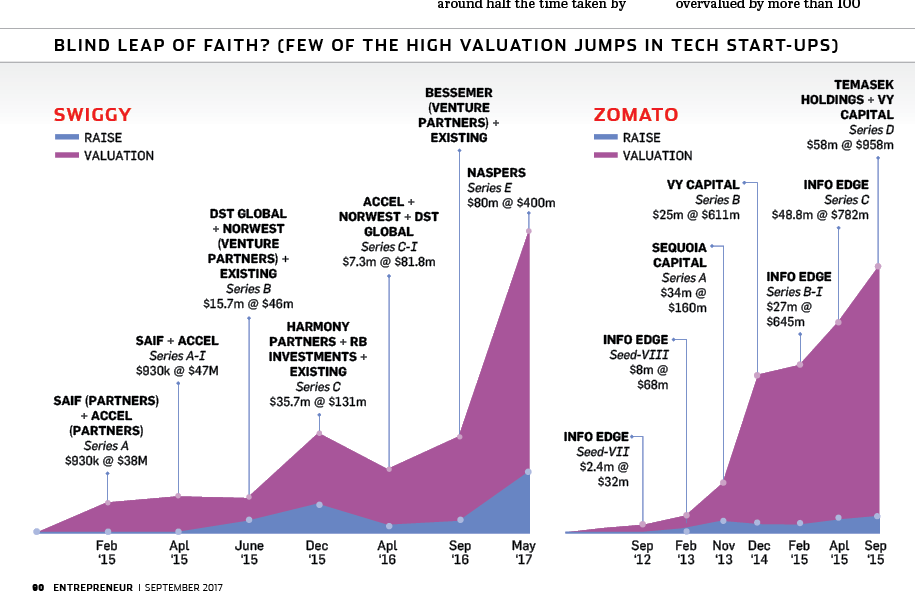 Then you have affirmative voting rights for minority investors, which make their consent in key business decision mandatory that might otherwise be bypassed by the majority shareholder.

But as an entrepreneur, Srinivasan sees use of such clauses as a mechanism to get funds at less stake dilution instead of boosting valuation. So there has to be a fair value assigned to the business at every fundraising round based on its performance.

But how do you do that when there are no real financials, at least till the Series B round. It is based on current and future value creation. At the end, fair value is the value at which both buyer or seller of the equity agrees.

"If you are eager to buy a car but as its owner I am not willing to sell it then certainly I would quote higher value for it, and vice versa the value would be much lower. The final value that we settle at would be the FMV," says Sharda Balaji, Founder, NovoJuris – a Bengaluru-based law firm.

A case in point here is the bitcoin bubble, as investors are allegedly blind in love with cryptocurrencies to make more money. Today one bitcoin is more than INR 2 lac. This FMV is based on the future growth of bitcoin believed by its investors. Hence, its valuation is enormous right now.

"FMV for start-ups is a misleading term, as they are not asset-heavy. Start-ups are creating new business models, so what really matters is whether there is value creation or not," says Vivek Durai, Founder, Paper. vc – a private investment data platform. For e.g., you can debate whether Uber deserves the valuation it has or not. It is a significantly discounted service but it provides more value than other cab services.

Here, emotions play extremely well – particularly greed. Apart from that the obligation to increase the value for their investors with every round and to raise as much money you can due to competition, particularly when growth gets shaky.

"Entrepreneurs get greedy and push for high valuation even as investors allow that," adds Srinivasan. Durai though disagrees. "It is not that everyone wants to be a unicorn. Founders think about how to raise a massive war chest to outgun competitors. In these situations their push for a higher valuation increases the notional value of all existing shareholders (including early investors) and reduces their dilution." For e.g., Snapdeal and Housing.com (both cases where Nexus Venture Partners was an early investor and SoftBank was a late stage investor) raised huge capital because they were in a hypercompetitive environment.

But when that doesn't happen and the company faces down rounds, the readjustment happens. A partner at one of the top professional services firms requesting anonymity explains that – Let's say an investor invests in a convertible instrument in the company and seek 20 per cent stake if the targeted growth is achieved.

In case entrepreneur achieves around 80 per cent of that, then investor's stake should go up by another two or four per cent.

If the growth is not met then investor asks for stake readjustment. This implies that such provisions are designed to dilute the founder's stake. They are investor friendly and so have little to do with valuation of shares. Valuation multiple on the other hand is usually a function of how established is the business model. And that would continue to be the case until there is a formula to calculate the FMV.