The World Economic Forum's (WEF) recently released estimates have predicted alarming post-retirement financial inadequacy in the wake of a $400 trillion deficit in retirement savings in eight countries by 2050.

In its joint report with Mercer, WEF revealed that the retirement savings deficiency in India was expected to touch $85 trillion by 2050 from the current shortfall of $3 trillion.

The disturbing increase of the shortfall is largely due to reduced savings and longer-than-expected lifespan of people.

An all-time Financial Inadequacy is Looming

India is in the third position after the US and China, which have bagged the top two positions respectively with $137 trillion (US) and $119 trillion (China) shortfalls in retirement savings, as per the report compiled following a study conducted on eight countries. 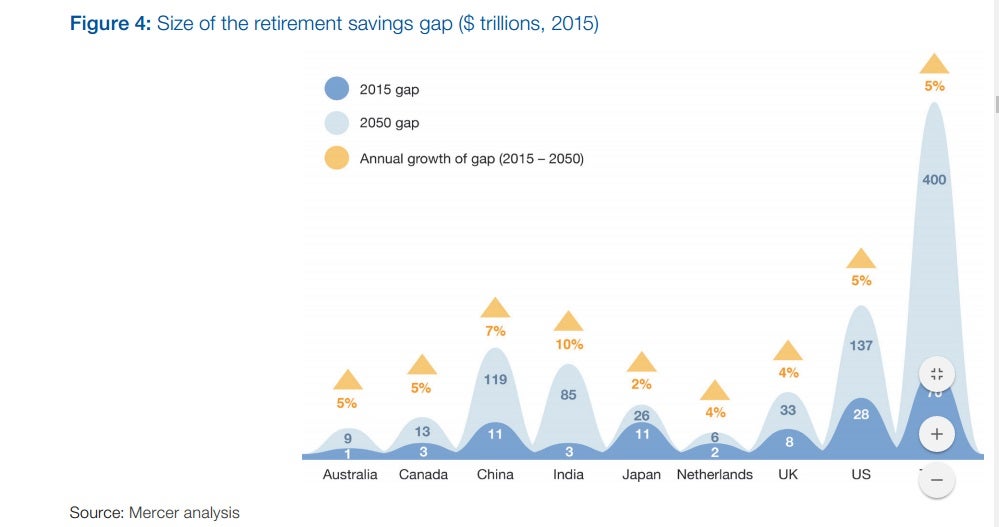 Anything less than the amount required to make up for 70 per cent of a person's pre-retirement income, which includes contributions from government, public or private sector pension and individual savings, is defined as inadequate in the report.

As per the report, this 70% income replacement rate target is in line with Organization for Economic Co-operation and Development (OECD) guidelines12.

However, it is a crude guide as low-income workers will need an income replacement rate closer to 100% while higher-income workers will require less than the target. For a more accurate measure, total household wealth and debt should be considered, rather than looking at the individual in isolation.

WEF report took the world's two fastest growing economies — India and China — into consideration and predicted that the gap increase rates will be 7% and 10% respectively by 2050, as per the current global conventions.

The WEF has reported that there will be over 600 million retirees in China and India by 2050. Nine out of 10 Indian workers are in the unorganized sector with limited access to retirement savings accounts and as wages and quality of life increase, expectations from retirement income will also grow. Wage growth is currently at 10% in India and 6% in China.

"Wake-up Before It's Too Late'

The corporate pension plans for employees are underfunded and account for 1% of the entire gap, as per the report.

Post these revelations, it stands to be seen how the government steers clear of this crisis by introducing more retirement benefit plans or by reducing tax rates before the situation is further aggravated.