The Australian vandals were responding to the alleged destruction of Indigenous art by a major oil and gas company.

This story originally appeared on The Epoch Times

Two activists have vandalized a 130-year-old painting in response to the supposed destruction of Indigenous art by major oil and gas company Woodside.

SOLIDARITY I'm so proud to throw my full support behind @burruphub, and to @joanapartyka for her protest at AGWA last week. Jo's a long-time member of my office team and I'm awed by her courageous actions to bring attention to the destruction of Murujuga's sacred rock art. pic.twitter.com/BnOyjonSbL

The stunt has drawn criticism, however, from Aboriginal leader Warren Mundine who said, "Two wrongs do not make a right."

In a video released on January 19 by Disrupt Burrup Hub, ceramic artist Joana Partyka can be seen spray painting the Woodside Energy logo—using a stencil—onto Fredrick McCubbin's "Down on His Luck" which has been part of the Art Gallery of Western Australia since 1896.

Partyka then appeared to glue her hand to the wall beside the $3 million (US$2.07 million) painting.

"Woodside likes to slap their logo on everything while they spray their toxic emissions all over sacred rock art," she said.

"We must stop any more industry on the Burrup, or soon there will be no art left."

Her fellow activist, Desmond Blurton, a Ballardong Noongar man, placed an Aboriginal flag on the floor of the gallery in front of the colonial-era oil painting.

"This painting is barely 100 years old," he said, pointing at McCubbin's work.

"We have 50,000-year-old artwork that Woodside is destroying. Cultural artwork that is sacred to our people is being destroyed."

The Disrupt Burrup Hub is calling for Woodside to stop the development of the Burrup Peninsula, located about 30 kilometers west of Karratha in the north-western Pilbara region—a mining-rich area of Western Australia.

The incident follows a spate of similar stunts across the world, with climate change activists vandalizing famous artworks.

On Oct. 27, 2022, a man apparently tried to glue his head to Dutch artist Johannes Vermeer's "Girl with a Pearl Earring" at the Mauritshuis museum in The Hague, Netherlands, while another man glued his own hand to the wall next to the painting.

The two Belgian protesters, who were wearing Just Stop Oil T-shirts in the incident, were both sentenced to two months in prison, according to ARTnews.

Related: There's No Future in Technology or Sustainability Unless These 4 Things Change 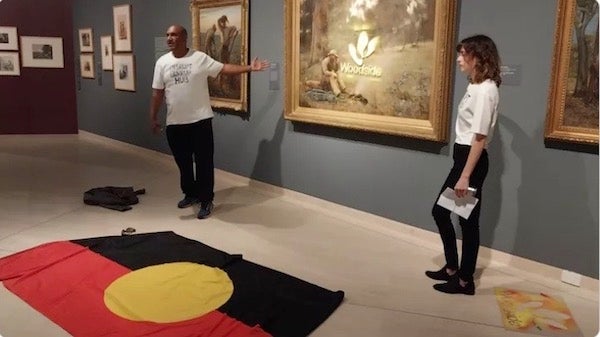 In response to the vandalism, the Art Gallery of Western Australia said the painting was protected by an acrylic covering and would not be damaged.

The Gallery also confirmed one protestor glued themselves to the wall.

"The protester has been removed from the gallery, and the matter is now with the WA Police," the Gallery said in a statement obtained by the Australian Broadcasting Corporation.

"A protester was located inside the gallery, where it is believed she had damaged a painting and glued her hand to a wall," a police spokesperson said in comments obtained by AAP.

"A second protester, who was in company with the woman, left the gallery after being asked by security and prior to police attendance."

Woodside Energy said it respected the rights of individuals to protest and outlined its environmental credentials.

"Woodside has a proven, more than 35-year track record of safe, reliable and sustainable operations on Murujuga, delivering natural gas to customers in WA and around the world," said a spokesperson in a statement.

"Our environmental approach complies with all applicable environmental laws and regulations and is underpinned by robust science-based decisions."

The company added that peer-reviewed research showed no impact on Murujuga rock art from emissions connected to the production of liquefied natural gas.

Woodside is one of Australia's largest independent energy companies and has operated the Karratha Gas Plant in Burrup for over 30 years while owning a majority share in the neighbouring Pluto Gas Plant—which is slated for expansion.

Indigenous leader Warren Mundine, who is also heavily involved in the arts, said the two individuals should have used the proper channels.

"If all you do is 'an eye for an eye, a tooth for a tooth,' then all you end up with is a lot of people with no teeth and eyes. We've got to live by the rule of the law," he told The Epoch Times.

"There's laws in regard to heritage and art; they should have done that. You can't go around being vigilantes and destroying things."

Daniel Y. Teng is based in Sydney. He focuses on national affairs including federal politics, COVID-19 response, and Australia-China relations.

The Epoch Times is the fastest-growing independent news media in America. We are nonpartisan and dedicated to truthful reporting.

We are free from the influence of any government, corporation, or political party—this is what makes us different from other media organizations. Our goal is to bring our readers accurate information so they can form their own opinions about the most significant topics of our time.

We don’t follow the unhealthy trend of agenda-driven journalism prevalent in today’s media environment. Instead, we use our principles of Truth and Tradition as our guiding light. We highlight in our reporting the best of humanity, the valuable lessons of history, and traditions that are beneficial for society.

The Epoch Times was founded in the United States in the year 2000 in response to communist repression and censorship in China. Our founders, Chinese-Americans who themselves had fled communism, sought to create an independent media to bring the world uncensored and truthful information.

The Epoch Times has received numerous awards for our reporting and design, including from the New York Press Association, the Society of Professional Journalists, and the Society for News Design.