A Flock of Airports Lifts Up Michigan's Upper Peninsula

Editor's Note: This series takes a close-up look at the SBA's economic "clusters" designed to aid regional businesses. Read the previous installments on Minnesota, the Carolinas, Mississippi and both San Diego and Monteray Bay, California.

Michigan may still be defined by its automobile industry, but it is starting to get some wind beneath the wings of its aviation industry.

The small cluster of regional airports across the Upper Peninsula of Michigan is joining with local businesses and economic development groups to work together to "green" the aviation industry. Four of six regional airports teamed up to "grow synergistically rather than competitively" as part of the Upper Michigan Green Aviation Coalition.

Members of the cluster specialize in environmental issues such as recycling old airplane parts, decreasing the weight of planes so that they require less fuel, and encouraging the military to adopt these "green" aviation practices. Because the military spends billions of dollars on jet fuel every year, the Defense Department seeks ways to fly its planes more efficiently, either by reducing their weight or by finding alternative fuel sources.

The overall aviation industry has committed to carbon-neutral growth in the next eight years, according to Vikki Kulju, a member of the coalition's management team. Airline businesses, whether airports, suppliers or manufacturers, will have an advantage if they provide innovative green technologies, she says.

The cluster received a financial boost when the Small Business Administration granted it $1.2 million in 2010 and 2011 as part of SBA's pilot regional clusters program. With the SBA funding, the Gwinn, Mich.-based aviation cluster hosted networking events that helped it create about 50 jobs and obtain more than $2 million in new contracts, Kulju says. 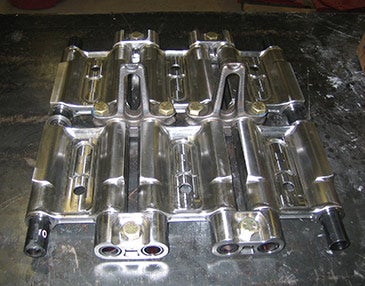 A prototype designed and manufactured by GS Engineering for a lightweight track system that reduces the ground pressure under a military vehicle allowing it to be transported in a military cargo aircraft.
Photo credit:GS Engineering Inc.

The coalition was formed in the spring of 2007, and has grown to more than 65 members, of which 80 percent are small businesses. While the four member airports are all located in the Upper Peninsula of Michigan, member businesses are located throughout the country and two are based overseas. The coalition includes four of six area regional airports but still hopes to attract the remaining two, which Kulju says may not be fully aware of the cluster's activities or are still evaluating the value of joining.

For small businesses already working in aviation, the cluster promotes their services to a wider national audience, and for small-business owners who lack experience but want to work in the industry, it mentors them on how to make the transition, Kulju says.