A Lesson in Apologies from TOMS Shoes

By Diana Ransom
July 26, 2011
Opinions expressed by Entrepreneur contributors are their own. 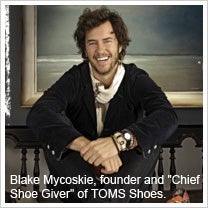 When Blake Mycoskie founder and "Chief Shoe Giver" of TOMS Shoes, spoke about the keys to his company's success at this year's SXSW Interactive conference, maybe he should have mentioned a good public-relations team.

Mycoskie, whose socially responsible company has for the past five years provided free footwear to impoverished children across the world, recently found himself embroiled in what he called an "issues debate" over civil rights and equality.

Here's what happened: At the end of June, Mycoskie spoke at an event sponsored by the evangelical Christian organization, Focus on the Family, known for its work in opposition of abortion and same-sex marriage. Shortly thereafter, Christianity Today magazine published an article that suggested that the urban-apparel company had been developing a partnership with the conservative group.

From there, the criticism was brisk. Along with blogs that picked up the story, Facebook and Twitter became sounding boards for outraged customers. Ms. Magazine launched a petition at Change.org that quickly gathered 500 signatures. What's more, the whole kerfuffle took place on the eve of the legalization of same-sex marriage in New York -- kind of a huge market for the brand.

In turn, TOMS Shoes quickly dispatched a statement to Change.org and Mycoskie whipped up a blog post that acknowledged the company's regret about appearing at the event and refuted rumors of partnership with Focus on the Family.

"TOMS and I have made mistakes internally and externally over the past several weeks, and I am deeply sorry for letting you down," Mycoskie wrote on the company's blog.

As Mycoskie discovered, a quick but heart-felt apology when times get rough can be a business owner's saving grace. Here are three tips for how to say I'm sorry:

How do you think Blake Mycoskie handled TOMS Shoes' PR ordeal? Let us know in the comments section.

Why 2023 Might Be The Year of the Crypto Underdog

5 Sales and Marketing Trends for 2023 You Must Know