Build a Million-Dollar Side Business

You can work full time and still be a successful entrepreneur.

May 18, 2010
Opinions expressed by Entrepreneur contributors are their own.

I have always considered myself an entrepreneur; it's something you are born with, something you actually don't have a choice in. It's that unbelievable desire and passion to create something all your own, where the power, decisions, success and failures are in your hands. Even during periods of my life when I had a full-time job, I always had something that was just mine, where I held the reins.

I also grew up in a household where I was constantly reminded that being self-employed is always better than the alternative; I was told that is where the money really lies. Prior to my current company, BooginHead , I had founded a recruiting and coaching firm. Despite its moderate success, it didn't take off in the way I had hoped. Maybe it was the down economy or the fact that I was just starting a family, but I knew it was not my golden ticket. At that time, someone shared with me that some of the most successful people in this world fail several times before they reach true success, and I believe this to be true. 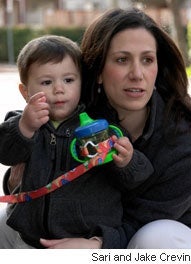 In 2005, I created the very first prototype of SippiGrip. I was frustrated with my 1-year-old son, Jake, who threw his sippy cup to the floor from his high chair, stroller and car seat. I was constantly picking up the cups, which were either getting dirty or getting lost. I looked everywhere for something that would fit my needs. While there were a few products on the market at that point, each one had some major flaw that rendered the it useless by my standards. I even said to myself, "If I find something that works just as well as what I have created, I will let this project go and move on to something else."

I never did, and that's how the SippiGrip was born. Now thousands of parents everywhere purchase SippiGrip from large retailers such as Babies "R" Us as well as smaller, high-end boutique stores like Kitson in Los Angeles. The SippiGrip is affordable and functional, but fashionable enough for every kind of customer.

In the beginning, the SippiGrip was made out of polypropylene (most commonly used for dog leashes) and only came in three solid colors. It was incredibly long (too long to pass any safety tests) and, at the time, it didn't have my "secret sauce," the grip material. But I hit the streets anyway to get it in front of any mom who would be willing to use it and give me her feedback. I asked mothers what they would pay for it, what to call the item and what improvements they would make. That initial feedback is what gave me the idea to use a material that allows the strap to suction to the cup or bottle. That's how I came up with the name SippiGrip, and it's what truly differentiates the SippiGrip from my competitors' products.

In early 2007 I stopped treating this as a hobby. I formed BooginHead LLC and decided to put my efforts into launching a serious business. At the time I had no experience or knowledge of the industry or even any idea of how to bring a product to market. This is where that raw entrepreneurial desire came into play. I used every resource I could find and connected with other parent inventors who had already paved the way to success. I made a lot of mistakes in the beginning and wasted a lot of money, but I learned from those mistakes and was better off because of them.

This year our company is on track to break the million-dollar mark in sales. The road was not an easy one, but there were a few key things we did early on to help move the business along and grow it so quickly:

How to Gain Larger Distribution
After launching in Target stores under the Parent Invented program, I wanted to use that success to gain larger distribution. At that time, Babies "R" Us was the ultimate goal for my products. I timed my pitch to coincide with the company's "line review" and when I knew I would have strong sales numbers to show. Pitching during the line review was important because I wanted Babies "R" Us to be open to looking at a new product. I approached the buyer by describing the success we had in a competing store and explaining what I could do for its stores. Using my established infrastructure as a selling point, I also demonstrated that my product was "plug and play." If Babies "R" Us took me on, it would not have to teach me the ropes of operating with a large retailer. I used this same approach with other retailers and had a strong response.

By the time I returned to The ABC Kids Expo in 2008, the BooginHead brand had seen incredible growth in the United States with Target, Babies "R" Us, BuyBuyBaby and Amazon.com.

It had become clear to me from watching my competitors that international distribution was the next step. This can be a daunting task without an understanding of how the retail business operates in other countries. I learned through relationships I had formed at the trade show that working with international distributors was the best route into foreign markets. These distributors often attend the trade shows and will approach you directly to work with them. But before you go down that road, there are a few important things to know:

Looking at the above list can be daunting. Once those things are established, however, selling internationally can be a great source of additional income for your business. International sales can greatly increase your profit because if distributors purchase directly from your manufacturer, you don't incur the costs of bringing the product into the country and distributing it. It is a pure profit scenario with very little added expense above the cost of manufacturing.

Expand Your Product Line
Gaining all these distribution channels to sell your one great product idea is a wonderful accomplishment, but in order to keep the cash flow strong, it's also important to expand your product line. The buyer at Target advised that when thinking about building my brand, I should consider products that could hang next to each other on the shelf and be in the same category. That way the brand presence is stronger, rather than having your products scattered throughout the store.

After seeing the success of SippiGrip, I knew I needed other products; the PaciGrip was an obvious addition. Because I was already using the same material for the SippiGrip, it was easy to add it to the production line and even offer them as a set. Little did I know that the PaciGrip was going to be one of my strongest sellers. This past year I introduced the SplatMat to the BooginHead brand, and I have two more products in development. All these products can be displayed in the same section of retail stores. They are also washable, durable, non-toxic, and they fit my main criteria: They solve a problem for parents at an affordable price.

Once you go through the cycle of bringing a product to market, it becomes easier each time to bring an idea from conception to reality. Keep your mind open to new ideas and don't be afraid to test something out with friends and family for feedback.

Being an entrepreneur is no easy task. Many of us have full-time jobs and families in addition to our business dreams. I work as an HR manager for Microsoft's XBox division. Along with managing a family with two young sons, it can be overwhelming.

But I truly believe that if you are passionate about something, it doesn't feel like "work," and somehow you find the time to fit it all in. In our family we have a "no work zone" between the hours of 5 and 7:30 p.m. This is when our family spends time together to eat and play without any interruptions. Having that structure in place, so you know you are carving out time for your family and for yourself, is so important. With some structure, a good support system and the right entrepreneurial spirit, any dream is possible.


Sari Crevin invented the SippiGrip and its companion product, the PaciGrip. Her company, BooginHead LLC, is on track for $1 million in sales this year.