For these action sports entrepreneurs, the term 'daily grind' has a whole new meaning. 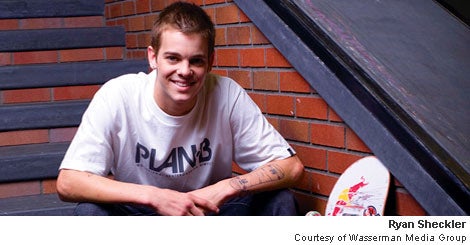 Ryan Sheckler'sjust wrapped up another business meeting at his Orange County, Calif., office. He's taking a rare break from the banter with his close friend and advisor, action sports superagent Steve Astephen, to scoff at a business magazine article that has him listed as the third-highest-paid name in action sports. When you've won X Games gold, bronze just isn't good enough. Either way, the Ferrari F430 parked outside didn't pay for itself and, besides his receptionist, the only full-time employee Sheckler has is his accountant. The point instantly becomes moot when one of Sheckler's friends arrives at the office with a new board, which Sheckler promptly snatches as he heads into the massive skate park he's built for himself in the warehouse area of the office. The tattoos on his right arm now share space with something considerably less artistic--the scar from his recent reconstructive elbow surgery--and his mother, Gretchen, is not amused.

"Are you watching this?" she asks Astephen. His reply seems more than a little symbolic.

Two years ago, Sheckler felt like any Southern California kid who wanted nothing more than a few minutes alone with his skateboard. There was almost nothing he couldn't do on that board, but it was about to take him somewhere no helmet or pads could protect him--into the world of business ownership. He was starting to feel overwhelmed--and the whole world was watching it happen on MTV.

Now 19, Sheckler's fast becoming skating's version of Jay-Z--with diamond stud earrings and ambition to match. When he's not on the road competing, he's in the office every day promoting his clothing line, signing shoes for fans or working with Gretchen, who runs his charitable foundation. Today, Sheckler has a meeting with a group of designers from Tech Deck, a toy company that's creating a replica of his warehouse skate park. Undeniably focused as he is on his business dealings, it's hard to imagine Sheckler's not somehow taunted by the idea of holding a meeting in his own personal playground when he could be tearing over and through it on his board. But he's turned himself into a living, breathing, kick-flipping commodity--one that's become so wildly successful it's hard for some to tell where Sheckler the skater ends and Sheckler the brand begins--and vice versa.

"I'm not like every other skateboarder," he says. "I'm not just some guy that wants to skate. Don't get me wrong: I do want to skate, but in the long picture if you look at it, what's going to help me when I do have a family in the future? What's going to help me when I don't want to skate anymore and I just want to relax and chill out with my friends and enjoy what I've made? You can't just do that from skateboarding alone."

Sheckler is at the forefront of a growing trend in a world that exists on a thin line between superstardom and paralysis. While plenty of action sports athletes have cashed in on varying degrees of self-promotion, a select few are taking it a step further, creating full-blown brands and starting companies. In the spirit of innovation that's paramount to their sports, their business ventures serve as both springboards and safety nets.

"You can only ride for so long," says BMX legend Dave Mirra. "If there's anything you can do to put your name on a product, when you decide to stop riding, it's a great transition."

If Sheckler's the hotshot startup on the business side of the action sports world, Mirra is its established industrial baron--literally and figuratively. He's the most-decorated athlete in the action sports world and, at 35, Mirra's been building his personal brand since before most of his competitors could ride a bike. Among other things, he's hosted TV shows, has a signature shoe and has his own series of video games. He's Tony Hawk with half as many wheels--and a quarter of the yearly bank balance. Hawk is the undisputed king of the action sports world--and market--but Mirra's prime as a competitor has fallen into perfect line with the mainstream success Hawk helped create for action sports. 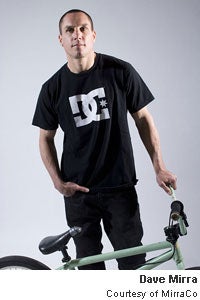 When Mirra decided to start his own company, he opted for hardware over apparel, starting MirraCoin 2007. Instead of manufacturing bikes, the company is essentially paid for its design and marketing services and for the use of Mirra's name. Besides allowing MirraCo to get started without much capital, it's a business model that also insulates the multimillion-dollar company from liability. It's a surprisingly common paradox--guys who make a living pulling unfathomable stunts with unfathomable consequences are quick to recognize that reckless abandon doesn't translate to business success.

"It's a whole different subject," Mirra says. "You can put out the best product, but marketing means a lot. Maybe people don't buy in to what you're selling. No matter what you do, it takes a whole different person to put all your heart and soul into running a business. It's definitely two different spectrums."

For Paul Rodriguez, the stakes are even higher. At 24, he's already thinking long-term, mostly because he's always wanted to be his own boss, but also because he's a new father. As a brand, Rodriguez started out a step ahead of the competition--he had name recognition before he ever stepped on a skateboard. 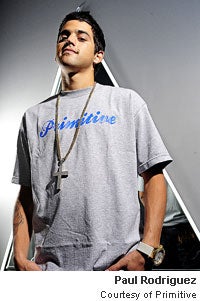 The son of the comedian and actor of the same name, Rodriguez was razzed as a kid by his Latino family for taking up what they considered a "white-boy sport." They're laughing with him now--in 2005, the same year he won X Games gold for the second time, Rodriguez became the first skater to have a Nike shoe named after him. He's parlayed his success into Primitive, a shoe boutique in the heart of Southern California's San Fernando Valley. He opened the store last year after some prodding from a longtime friend, and he's making the most of the free education he's getting from a branding giant.

"I'm just a kid, so I was learning it all as I came in," Rodriguez says. "Right now, I'm taking this opportunity to learn about the business end as if I were an intern. My main focus right now is to be the best I can be at my sport and hope all the rest of the duckets fall in line."

This sort of merit-based marketing gives action sports athletes a distinct marketing advantage as business owners--bigger air equals bigger exposure. Like Rodriguez, Sheckler has high-powered sponsors who pay him millions--in fact, they actively support him to the point where they're helping him work toward his goal of offering packages that would include an outfit, shoes and a board for one price. But his clothing line is in its relative infancy, and he knows Sheckler the brand is only as strong as Sheckler the skater.

"When I win, they say, 'Did you see that shirt he was wearing at the contest? I want that same one,' and they go do it," Sheckler says. "If we continue on this path, I think Sheckler could be the biggest name in the action sports industry. I think we're pretty close, so I just have to keep my head on and keep winning these contests."

Because he's selling equipment, the continued-head-attachment factor is especially important for Mirra, who's suffered his share of injuries, including a lacerated liver in 2006. That's why he's focused his business efforts on creating higher-end bikes, and when he puts his ass on the line in competition, it's sitting on a MirraCo bike.

"Essentially, it's an advantage out of the gate," he says. "You can do all kinds of marketing, but it's huge when you have guys out there and you can see it's a great product. All of us riders test everything lately. It's nice to know you have one of the lightest bikes on the market and it's very reliable. If you crash, you crash--that's part of the game--but you don't want it to be because of faulty equipment."

For Rodriguez, success involves more than just protecting his head--he has to think about his roots as well. Besides being the first skater to have his own Nike shoe, he's also the first Hispanic, and he's become a hero to a whole new crop of young Latino skaters in the Valley, where he still makes his home. Primitive has become one of their many hangouts, and whether they're buying or not, they're treated like family. They flock to the store on Saturday afternoons, boards in hand, mesmerized by the seemingly endless tapestry of the latest styles as Jubal Jones, who handles Primitive's day-to-day operations, asks them about their favorite skate spots and makes sure they're staying out of trouble.

"When I was a young kid just skating, that type of stuff was never in my mind," Rodriguez says. "Now that it's happening and it's being pointed out, it's a major blessing and a major honor to be an influence on a lot of young Latinos. Now, especially in the Valley, the majority of kids are Latino skaters, and it makes me proud. It makes me proud to see that my influence has touched them and inspired them to go after their dreams."

Dreams are, of course, relative. Kids who spend every free moment tearing up the streets on their skateboards and bikes dream about the day when crowds will chant their name as they fly above half-pipes and glide effortlessly over railings. But when you're already mainlining adrenaline as a full-time job, your dreams tend to follow suit.

"I'm a skateboarder," Sheckler says. "I'll always be just a skateboarder. But I have these awesome opportunities that I'll never let go by. It started with skateboarding. It'll end with skateboarding. The things I do in between are my choice. The haters can say what they want, and the people who are my friends can realize what I'm doing and realize the empire I'm building for myself, and tag along and have some fun."