Is Your Business Ready for Video?

What are you waiting for? It's time get in the game. A whopping 71 percent of adults now consume video content online. 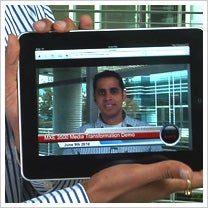 If the findings of a recent report are any indication, you should be slapping pancake makeup on your business and telling the director that you're ready for your close-up. The survey, from the Pew Internet & American Life Project, shows that 71 percent of U.S. adults who use the Internet have used video-sharing sites such as YouTube and Vimeo. And these aren't infrequent users. When asked if they'd visited such sites as recently as "yesterday," a full 28 percent answered to the affirmative.

That's a lot of consumers watching a lot of online videos. What does this mean for your business? First, a few fun facts.

Did you know that 48 hours of video content are uploaded every minute on YouTube? And that they're subject to more than 3 billion views a day — with more than 200 million of those views coming by way of smartphones and mobile devices?

The Pew report has some interesting details about the people associated with those billions of online views. And as we all know, demographics such as those are a major consideration in choosing where and how to market your products or services.

Interestingly, online African-Americans and Hispanics watch more Web videos than online Caucasians. When it comes to household earnings, 71 percent of those earning less than $30,000 a year were viewers. That's just a few shades less than the 75 percent for those earning $30,000 to $49,999 and the 76 percent of those making between $50,000 and $74,999. But 81 percent of online userss who earn $75,000 and more were online video watchers. Sixty-three percent of high-school grads said they've used video-sharing sites, compared with 75 percent for those with some college or college plus additional degrees.

Clearly, if your marketing, sales, customer support or technical service teams have been sitting on the video sidelines, now's the time to get them into the game. This survey leaves no question as to whether consumers consume video online.

If what's been holding you back is the lack of a game plan for filming, producing and managing video content, by all means get your team together and develop a request for proposals (RFP.) Then find a video production firm or consultants in your area qualified to assist you in conceptualizing and preparing your company for shooting and publishing video that will support your business-related goals.

Finally, Vimeo just released a new service called Vimeo PRO, an affordable professional video-hosting solution for small businesses, which I'll be writing about in this space on Thursday.