Steve Astephen's turning cult heroes into household names--and his philosophy can work for you, too.

Steve Astephen's legacy is everywhere. It's in the oceans. It's in the mountains. It's on the street. But more than anywhere, it's in the air, where his clients' exploits inspire the next generation of action sports stars. Ten years ago, Astephen revolutionized the action sports industry when he recognized the marketability of its larger-than-life athletes and created an agency focused on turning them into brands. He has since partnered with Wasserman Media Group and become one of the biggest names in the game, but he still remembers when his biggest asset was the sort of infectious energy that comes only from someone eager to break the mold. 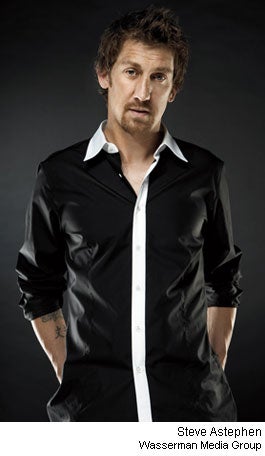 Before starting his agency, The Familie, Astephen had worked on the retail side of action sports with Vail Associates. He left Vail Associates to open his own snowboard shop at the age of 20. From there, he moved into marketing and promotions for several other companies, where he continued to come up with new ways to advance action sports athletes and their sports.

Astephen says a large part of his success as an agent comes from the wealth of personal credibility he's earned in the action sports world.

"A lot would say I was the first agent in action sports," he says. "But that's not necessarily true. IMG did have a guy who was working with some snowboarders and some wakeboarders. It's just that they didn't have relevancy. They weren't in this world. It's just not there for them. When I signed my athletes, it was because these guys were my best friends. I only got from snowboarding into motocross and skateboarding and BMX because all the athletes intertwine, and the world of action sports is very tight."

Astephen's clients include some of the biggest figures in the action sports world--names such as Dave Mirra, Ryan Sheckler, Carey Hart, and Bruce and Andy Irons. For him, success is much more than getting his clients noticed in the water, on the track or in the half-pipe--it's about helping them create lasting legacies by starting their own companies. For his up-and-comers, he preaches a mantra of patience--a willingness to "say no to a dollar now because you might gain six in three years."

Like many entrepreneurs, Astephen recognizes that sometimes it's easier--and more lucrative--to simply ride a different path than to reinvent the wheel.

"My personality as an entrepreneur is not to be doing something that has never been done. If I look back at my first business--a snowboard shop--it's been done, and they used to be called ski shops," he says. "All I was doing was taking a specific niche and creating my own ski shop. My agency had been done for 30 or 40 years before me. I just did it differently. Do your research and really look at other smart people."

When it comes to tapping others, Astephen is just as passionate about the present and the future as he is about the past. He says much of his success--especially in the early going--comes from shedding the clichés of the maverick entrepreneur and enlisting people who know more than he does.

"It's so important to surround yourself with smarter people," he says. "If I hadn't hired a CFO as fast as I did--maybe too early, but I was lucky enough to hire a CFO who understood marketing and promotions and wanted to do that as well--I would say today that I would be in a lot of trouble. I'm blessed to be the guy--because of the way I was raised--I need help. I've always needed help. So surrounding myself with smarter people was the biggest thing. I knew what I could do. "

It wasn't long before the smarter people Astephen seeks started coming to him--prospective investors and partners. After a short-lived deal with publishing giant Austin Hearst and an offer from ad agency behemoth Omnicom, Casey Wasserman approached him in 2002. Wasserman, grandson of Hollywood legend Lew Wasserman, had started WMG a few years earlier and was looking for a partner rather than an investment. It was the difference Astephen was craving and something he encourages all entrepreneurs to consider when the time comes to take their businesses to the next level.

"The great thing about [Wasserman] is that he became like a brother and a friend more than a partner," Astephen says. "Those are truly the people [you want to find] as an entrepreneur. If your eventual goal is to sell your company, if you want to continue to be passionate and work with your brand or your company, you've got to find the right people whom you're going to do that together with."

Selling the company outright was never an option for Astephen, who at 30 knew he had much more to accomplish. Six years later, his partnership with Wasserman is stronger than ever--all the more reason to stay involved.

Thanks very much to his hard work, Astephen is living at ground zero of action sports' mainstream explosion. But in a world where success is measured by the ability to seemingly defy the laws of physics, his final words of advice seem amazingly grounded.

"Be true to yourself, sleep really well at night and surround yourself with smarter people."