American pastry shops and other suppliers have discovered Chinese moon cakes as a new profit center. For other businesses, the pastries are great networking tools.

By Joanne Yao
September 16, 2008
Opinions expressed by Entrepreneur contributors are their own.

Special correspondent Joanne Yao, a freelance writer based in Beijing, reports on business developments in China and other parts of Asia.

Meet the moon cake: China's version of the Christmas fruitcake--a dense, filled pastry that is sliced and served every year during the Mid-Autumn Festival, a Chinese holiday that honors longevity and family unity on the day the moon is brightest. Though some say moon cakes resemble chewy hockey pucks in shape, weight and flavor, the 700-year-old tradition of gifting and eating moon cakes has stayed firmly lodged in China's cultural gullet because the unwieldy pastry was the tool of revolutionaries--according to an age-old anecdote.

In the late 1300s, following 97 years of Mongolian rule in Northern China (the Yuan Dynasty), Han Chinese rebels cooked up a last-ditch effort to drive out the invaders. During the Mid-Autumn Festival, the rebels distributed hundreds of moon cakes to local families under the pretense of celebrating the holiday and the longevity of Mongolian rule. The Mongolians didn't eat moon cakes, so they didn't get the memo hidden inside the gooey centers: Kill the Mongols on the 15th of the eighth lunar month. On the day of the Mid-Autumn Festival, thousands of villagers ate the evidence and rose up to chase the invaders out of China. The rebel leader, Zhu Yuan Zhang, became the first emperor of the Ming Dynasty.

Now in the weeks before and after Sept. 14, pastry shops, supermarkets and hotel restaurants in China, Singapore, Hong Kong, Vietnam and Japan are battling over consumer taste buds with different plans of attack: Some are baking classic Cantonese-style moon cakes, with a glazed, toasted exterior, and lotus paste and whole egg yolk interior, while others rely on quirky modern twists--using fillings of imported cheese and cherries, champagne custard or spicy beef while exchanging the pastry skins for shells of chocolate, jelly or rice cake.

Networking Tools
In 2006, 250,000 tons of moon cakes were sold in China, producing an estimated revenue of $1.42 billion for bakeries, hotels and manufacturers. In Beijing alone, moon cake sales in the three-month purchasing season from July to September generated $20 million in revenue.

It's not because these cakes are irresistible (though Haagen Dazs does make an ice cream moon cake). Sending cakes with luxurious ingredients is a subtle way to curry favor. Chinese consumers don't just buy a tin of moon cakes to share with the family. They send them to business partners, clients, bureaucrats and even their children's school principals--whomever a networking boost would benefit, following an unspoken etiquette.

As the festival approaches, the reception areas of businesses become inundated with colorful packages of moon cakes. In fact, rejecting moon cakes is on par with walking into a Japanese household with muddy sneakers, as microchip maker Intel Corp. learned when it unwittingly offended the company's Chinese suppliers by snubbing their moon cakes based on company policy toward gifts. 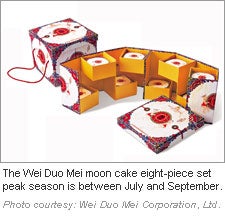 For bakeries such as Beijing's Wei Duo Mei, or "Beautiful Taste" bakery, moon cake season is the busiest and most profitable time of the year. In 2007, the bakery chain hired a French chef to re-imagine the ancient holiday food and then offered moon cakes filled with dried Japanese scallops and New Zealand cheese. It sold more than 60,000 moon cakes that season. 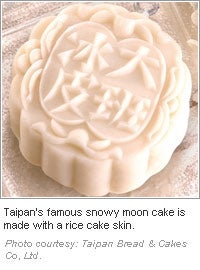 This year, Wei Duo Mei is selling out of its buttery, blueberry-filled French moon cakes. More than one-third of its cakes are nontraditional, and the gold and crimson sets sell for $15 to $40. Tai Pan Bread & Cakes, a bakery chain with 40 branches in Hong Kong, has enjoyed a loyal clientele since its opening in the 1980s in Hong Kong's Kowloon Bay. It's well-known as the first to create a moon cake made with a rice cake skin, in 1980. It still sells the popular Snowy Moon Cake, which won an award for most innovative marketing in 2002 in Hong Kong's MEDIA magazine.

Moon cakes are not just business for bakeries--even China's five-star hotels try to one-up each other to make the best-tasting and most innovative moon cakes of the season. Most Chinese business owners can tell you which hotels are best for moon cake, and more than a few even judge a hotel by its moon cakes. Singapore-based Raffles Hotel is famous for its snow skin (rice cake-covered) mini moon cakes with decadent champagne and white chocolate filling, and Shangri-la hotel is known for quality. 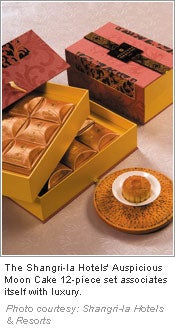 "Our moon cakes are not only a food promotion, but a way to show respect to Chinese culture," says Judy Wang of Shangri-la hotels, a leading luxury hotel chain in Asia that has offered moon cakes since opening its first China-based location in 1984.

Wang believes that Shangri-la moon cakes are popular due to the prestige factor--because customers associate the Shangri-la brand name with luxury.

Shangri-la's Beijing Kerry Centre Hotel offerings include the Benevolence collection, $20 for a set of four cakes filled with lotus paste and egg yolk. Its Inheritance collection, priced at $52 for nine cakes, includes a fusion of flavors--from green tea and date to pomelo and beans, sea moss, and rum and black currant.

The Raffles collection offers a spicy beef moon cake that was specifically designed with Muslim Chinese in mind, while other flavors are low-fat or sugarless, in stark contrast to traditional moon cakes' heavy use of sugar, oil or lard. Even Shangri-la's eyebrow-raising pomelo and beans-filled moon cake was developed to attract increasingly health-minded consumers in China, where obesity is becoming a problem.

The tendency toward healthy moon cakes and unique fillings hasn't just benefited the health conscious. In fact, a February 2008 report by the U.S. Department of Agriculture concluded that China's moon cake market may offer "a golden opportunity" for U.S. ingredients. Where do you think those cheeses and cherries come from?

Imported ingredients are gaining favor as fillings for China's booming moon cake industry. In fact, American companies such as Starbucks, Haagen Dazs and Ocean Spray have been manufacturing and selling moon cakes in China for a decade.

Whether you're conducting business in China or exporting your products, China's love of moon cake culture is sure to affect your operations even if the dubiously flavored moon cakes remain uneaten on your receptionist's desk. The fierce evolution of moon cakes from holiday treat to networking tool holds sway over people and businesses during the autumn season.

Moon Cake Etiquette
Keep these tips in mind to KO the competition this moon cake season:

Receiving: Businesses that work with domestic Chinese dealers, suppliers and corporate clients should be prepared for frequent office callers when moon cake gifting season (July through September) rolls around. Approach these interruptions to your coffee breaks with steady composure--remember, moon cakes often are personally delivered by high-ranking company managers not only to show respect and networking interest, but also to voice their organization's wishes and hopes through your partnership. Show the mutual amiability with a simple person-to-person meeting and don't forget to wish them a happy Mid-Autumn Festival. Never open the package in view of the giver. And always offer a warm thank you.

Giving: More impressive than a tactful thank you is the insight to give moon cakes to the most valued domestic associates, employees and clients, a gesture that not only shows a strong desire to continue the partnership, but also highlights an appreciative understanding of Chinese culture that many expatriate businesses don't bring to the table.

Like Chinese businesses who cultivate guanxi (social capital) through the practice of moon cake giving, stick with well-known moon cake bakers or luxury hotel brands for a touch of class, and the latter especially for a safe bet. Moon cake brands vary regionally--for example, Taipan Bread & Cakes is a favored brand in Hong Kong with their snow skin moon cakes, new-fangled moon cake shop Wei Duo Mei dominates in Beijing, while Shanghai's Xin Hua Lou brand sees its fruit-and-nut moon cakes fly off the shelves. If you don't have time to do the legwork, stick with moon cakes from luxury hotel brands such as Raffles, Sheraton or Shangri-la.

Lastly, deliver the goods in person or with a message of intention. It's not rude to say "Thank you for doing me this favor. Please enjoy these moon cakes as a token of thanks, and happy holidays." In China, a gift of moon cakes will always net a gift or favor in return.