Pencils of Promise Is Giving Nonprofits a Hard-Nosed Entrepreneurial Facelift

Adam Braun remembers a night a few years back when he was at a fancy, New York City rooftop soiree having an extended chat with a venture capitalist. About 20 minutes into the conversation, the investor asked Braun about his profession. Braun told him he ran a nonprofit organization.

"Immediately, his tone changed. The way that he looked at me changed," said Braun. The venture capitalist then asked Braun whether the nonprofit "project" was a full-time endeavor, and when Braun responded in the affirmative, the man became aloof and disinterested in further conversation.

"I went home and I realized, that was happening a lot in various conversations and rooms that I was in," says Braun. "I realized the phrase nonprofit does a massive disservice to the broader industry. It's the only industry that introduces itself with the word non." Instead, Braun prefers to introduce his organization as for-purpose.

Which is not to say that Braun is against the idea of working to make a profit. Quite the contrary; Braun staunchly believes in capitalism and the power of markets. 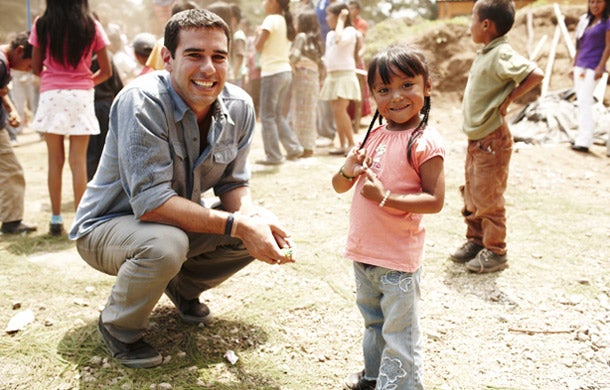 Adam Braun with a student in Guatemala.
Image credit: Nick Onken/Pencils of Promise

Before he launched Pencils of Promise -- a philanthropic organization that builds schools in Latin America, Africa and Asia -- Braun worked for management consultancy Bain & Company and before that, he worked in finance. His experience guided the way he set up his nonprofit. "I saw this level of business efficiency and accountability that often times does not translate into the nonprofit space, because people don't hold nonprofits accountable to those same standards," says Braun. "I wanted to run an organization that was run with business efficiency at the core."

Braun's nonprofit has, on many levels, been succeeding not only at the mission-level, but also according to rigorous business standards.

Now in its fifth year, Pencils of Promise is turning growth numbers that would please even the most competitive venture capitalist. In 2008, Braun launched Pencils of Promise with $25 and brought in $30,000 worth of donations. In 2009, he brought in $80,000 and in 2010, the organization raised $1 million. In 2011, donations doubled to $2 million, and last year, they topped $5 million.

When you are building schools in rural parts of developing countries, that's enough money to build a lot of schools.

A Pencils of Promise classroom costs approximately $10,000 and a school costs $25,000. Since its inception, Pencils of Promise has built more than 150 schools enabling 13,000 children to receive an education. The goal, says Braun, is to build more than 500 schools, train 1,000 teachers and have 10,000 students in the program's scholarship program. 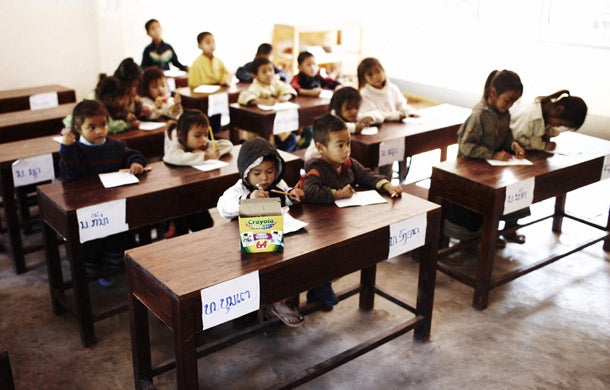 Any administrative expenses that Pencils of Promise has, which Braun prides himself on keeping very slim, come from corporate donations. Individuals making donations often want to be guaranteed that their dollars go directly to helping children. Companies making donations typically have fewer restrictions on where the money can go and how it can be used, says Braun.

Pencils of Promise started from a drive to help children get access to quality education, no matter where they were born or what socioeconomic status they were born into. When backpacking through India in his early 20s, Braun asked a small boy he encountered who was begging what he would most want in the world. The boy's response was, "a pencil." In that moment, the idea for Pencils of Promise was conceived.

Braun has no misconceptions that despite his hard-nosed business acumen, Pencils of Promise is a mission-driven organization. But it's a results-driven, outcome-driven, mission-driven organization. "In order for you to become successful in achieving your mission, the business has to be sound, and the stronger the business is, the more it should complement you achieving your mission and goals," says Braun.

That combination – and Pencil of Promise's ensuing success -- has made Braun something of a rock star in the entrepreneur and nonprofit space. At the ripe old age of 30, Braun has already been named one of the first 10 World Economic Forum Global Shapers and honored at the United Nations by the Clinton Global Initiative. He has also spoken at the Google Zeitgeist conference and been named to Wired Magazine's 2012 Smart List of 50 People Changing the World.

At the end of the day, Braun credits his company's success to its emphasis on principles that work. "We speak a language that doesn't just appeal to nonprofits and academics and traditional NGOs. We speak a broader language that sits at the intersection of nonprofits and for-profits and invites both of them to become supportive of the work we do and adopt some of these principles that we found have allowed us to become a high-growth organization," he says. "I look at myself as an entrepreneur. Not a nonprofit, for-profit person. It's just that I like starting things."

Conversational AI Is a Revolution That's Just Getting Started. Here's How It Can Boost Your Business.