Tom Stemple's startup personalized millions of digital gadgets. Now he wants to do the same to your ride.

If you have a favorite sports team, college or Disney character and a cell phone, you've probably heard of SkinIt. What you probably don't know is that the same guy who helped you create that personalized skin for your cell phone can do the same thing for your car. 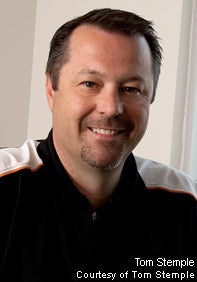 In 2003, Tom Stemple had the sort of struck-by-lightning moment every entrepreneur dreams about--on steroids. Stemple's brother had taken his wife's cell phone to work by mistake--a mistake that was temporarily costing him his sanity. Drowning in a sea of drab black and silver cell phones hardly distinguishable from one another, Stemple decided there had to be a better way to personalize them. Others had tried with stickers and decals, but no one had Stemple's high-tech background and computer-aided design skills. So within a month of that chance phone swap, he and his brothers had bought a $50,000 printer and were designing vinyl skins cut specifically to fit certain cell phone models. The SkinIt website launched in November of 2003 and received more than 200 orders the first day. Within a year, the company was moving into a bigger space every three months and opened a second office in the United States as well as offices in Paris, New Zealand and Canada.

"It was like a rocket ship, so we held on and rode it," Stemple says.

Stemple rode that rocket ship until 2006, when he sold SkinIt to Global Wireless Entertainment, his first partner and the company that helped him create the business model that had been such an integral part of SkinIt's success. Rather than focusing on individual retail sales, Stemple took his product straight to the big consumer electronics companies, offering to all but give them free use of his technology--and help them build it directly into their businesses--in exchange for their customers. He also met with the NBA, the NFL, Major League Baseball and Disney, and was able to secure licensing rights from all of them within a year. All it took for any of them to sign on was to see the product.

"It was like we'd invented the white T-shirt," Stemple says. "No one can figure out how we make money doing things one at a time, and that's a lot of the magic in the technology and the systems that we've built. No one had really done that before, and the only way we were able to achieve that was by having a really strong technology background. I've always viewed myself as really a technology/business development/marketing person, so I'm always looking for different places we can add technology to make things more efficient or create something that's not already there." 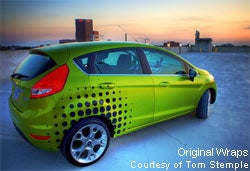 Using his cocktail of technical know-how and magic, Stemple had changed the way consumers interact with websites and developed systems that allowed printers to do things their own manufacturers told Stemple they weren't capable of doing. So after he sold SkinIt, making sure to secure rights to stay in the personalization game, Stemple started from scratch, re-engineering the whole system to start Original Wraps, a company that does for car shoppers what SkinIt did for gadget junkies.

The one thing Stemple took with him from SkinIt--other than a very nice chunk of seed money--was his business model, which he knew would work just as well, if not better, in the automotive industry. His research--more than a year's worth--revealed a surprising similarity to the epidemic of blandness he'd seen just six years earlier in the cell phone industry (to that point, 250,000 people had bought a silver Ford Focus), as well as an alarming vacuum of anyone in the digital design space. He become the first company to fill that void when Original Wraps partnered with Mini to create Mini Motoring Graphics, a website that mirrors the look and feel of Mini's main site, but which is run by Stemple and his company and provides personalization services to Mini owners and prospective buyers. He's since forged partnerships with Mini's parent company, BMW, as well as Ford and Nissan.

Since launching in 2006, Original Wraps has seen its profits grow by 50 percent every year--all while under the weight of the elephant in the room: If you're using similar technology and the same business model, why sell a multimillion-dollar company to start a new one that's so similar?

"I'm a lot better at creating things from scratch than I am at taking things to the next level," Stemple says. "Truthfully, the guy who ends up making most of the money is the early-stage guy because you're creating things from vapor. There are a lot of [people with a] master's in business from Harvard who can plug into a company and take it to the next level, but there aren't a lot of guys out there with a good idea who know how to make something from nothing--and do that in a short period of time. I view the market as a sprint and not necessarily as a marathon. Early on, you want to hit this thing as hard and as fast as you can, and you want to keep it as big a secret as you can, which are two very difficult things to do. Then, when it's time, you've got to go hard and fast and sing it from the mountaintop and make it seem like you've already done everything and there's no sense even trying for everybody else. That's when you go from being nonexistent to becoming the 800-pound gorilla in the space literally overnight."

Besides all that, Stemple's really having a good time.