When Thanos decided to disintegrate half of all life in the universe, the Avengers were called in to save the day.

When gyms closed during the quarantine, Movement by Michelob ULTRA LIVE called the only people who could save us from our couch-bound snacking habits: Billy Blanks, Suzanne Somers and Jake "Body by Jake" Steinfeld. Yes, the legends of at-home fitness crazes from the 1990s are coming together once again to get our butts, abs and thighs in motion. 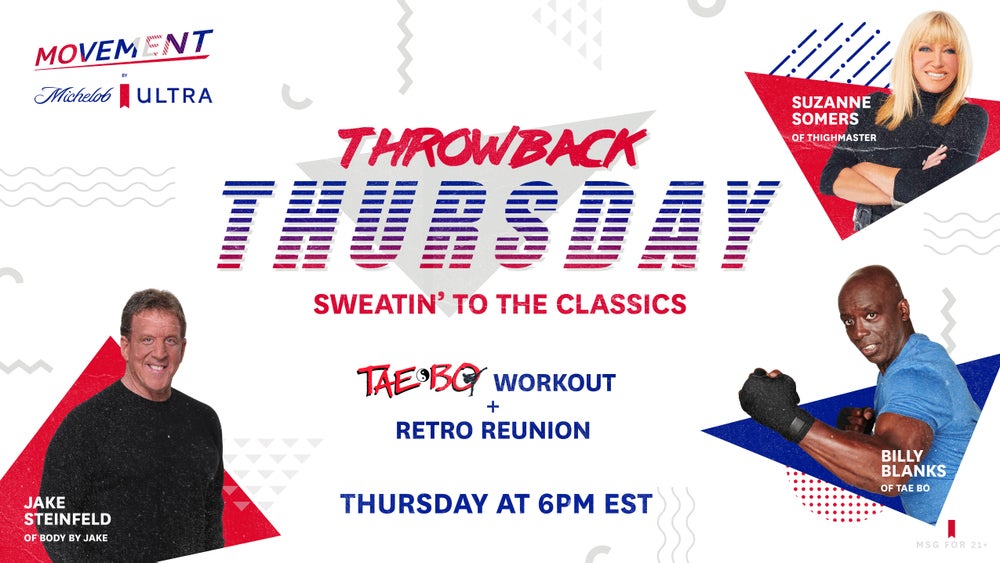 In the leadup to the coming together of these at-home heroes, Entrepreneur spoke with Suzanne Somers about the most iconic piece of exercise equipment to ever grace a TV screen: The ThighMaster. (Sorry, Shake Weight.)

On ThighMaster's hold on our imagination

"You know, I've written 27 books on health. I've done 16 or 18 years of series television, I've given lectures — and the thing I am best known for is the ThighMaster! [Laughs] I think it was the tagline: "You just put it between your knees and squeeze.' It was the right product, the right place, the right timing, the right spokesperson — the right everything. It was a perfect storm."

Related: 10 Ways To Motivate Yourself To Workout Everyday

The making of an iconic commercial

"I had bought this pair of Manolo Blahnik shoes that were at that time, 500 bucks. I was in my dressing room and thought, "Oh my husband is going to think this is so crazy spending this much money.' But for me, they were perfect. So I walked out of my dressing room in my underwear and I said to my husband, "Like my new shoes?' And he said, "Great legs!' And I went, "Oh my God, that's the commercial!' That's how we started the commercial if you recall. We sold 10 million ThighMasters right out of the gate. It still sells to this day even though we don't advertise."

Putting the business in show business

"When I was playing Chrissy Snow on Three's Company, the producers did not understand business. They only understood how to put on a great show, and maybe that's all they needed to understand. But my husband and I kept saying that you're missing out on a whole thing here. We could brand Chrissy Snow products! She wears the little shorts and knee socks and wedge shoes and snap-on ponytails. And they would get mad at us: "This is not about business — it's about the show!' And I would walk away thinking, "Actually they call it show business.'"

How ThighMaster was born

"People were presenting ideas to us and this woman presented what she called The V-Toner, which is a very unsexy name. She came to our house and showed how it worked, how you can use it to exercise your upper body, your pecs and your arms. And I'm staring at it and I said, "Does that work for the inner thighs?' She goes, "Yeah, but people are more interested in their upper body.' And I said, "Not women!' And so that day we took over ownership of it and renamed it ThighMaster. That was our foray into branding and we haven't stopped since. If you go to Suzannesomers.com, you can see the array of our products."

Related: The Only 5 Items You Need to Get a HIIT Workout at Home

"I did not plan to be this person. I really liked being Chrissy Snow on TV. I didn't plan to be the unofficial first feminist when I demanded equal pay. Men were all making 10 to 15 times more than me, including John Ritter, and the network decided to make an example of me so that no other woman would have the audacity to ask for parity. I lost that great job and I was so devastated at the time, but life is about veiled gifts. I was suddenly kicked out on the streets, but I kept reinventing myself, and my husband and I decided we wouldn't work for anyone ever again. I put together my own show at the MGM Grand and in 1987, I was named Las Vegas Female Entertainer of the Year — Frank Sinatra was the Male Entertainer of the Year. I decided not to feel sorry for myself. What was it unfair what happened to me at ABC? Yep. It was unfair, but life isn't fair and you have to get over things and move forward."

On which at-home workout rules them all

"If you're spending a lot of time in bed, you can get a whole lot of exercise done with the ThighMaster. You can do the thighs and you can actually work all your entire body. So let's stay in bed and do the ThighMaster. No insult to Jake or Billy!"