Program puts entrepreneurs into ethnic communities with which they're familiar. First up: Latinos.

Lynwood is a dense, 70,000-resident California city in the southeast corner of urban Los Angeles County. Its violent crime rate towers above the state's average, and at least 11 gangs call it home. But things are changing. Its burgeoning Latino population (82 percent of the city) is aspiring and thriving. Its median household income has grown to more than $40,000 a year. And its rising home ownership rate is now near 50 percent.

Across the street from El Rojo market, on a stretch of Long Beach Boulevard lined with a hodgepodge of colorful mom-and-pop shops, a spanking-new strip mall the color of mango has risen. Familiar franchises, fast food joints and other retail brands have rushed to take their cues: Little Caesars, Wingstop and MetroPCS have storefronts there. Then there's the T-Mobile store. It's airy and minimal with high ceilings, blonde wood floors, modular displays, tropical cumbia music, and bilingual signage: Compra uno y llevate cuatro gratis--buy one, get four free."

What a deal. It's a retail oasis worthy of any American mall. 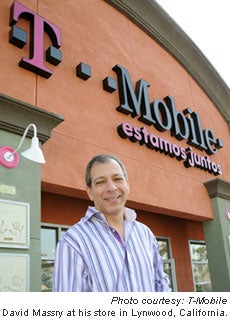 The mobile phone seller is one of six opened in Latino communities by David Massry, president of the national Ritmo Latino record store chain. The new outlet is a product of the T-Mobile Premium Retailer (TPR) program, a drive to link up with knowledgeable, experienced entrepreneurs who want to open T-Mobile branches in ethnic communities with which they're familiar.

"These customers are looking for a certain quality of service, and that extends to how a store looks and the people who operate the store--and the sales associates, too," says John Clelland, vice president of channel development for T-Mobile.

The initial "TPR Latino" effort started in Southern California and will expand to the nation's 10 metropolitan areas with the highest concentration of Latinos, including New York, Los Angeles, Houston, Dallas and Miami. The Latino retail market in the United States is said to be approaching $1 trillion in annual spending. "Going Hispanic was the logical first choice given the size of the population," Clelland says, "but we are looking at other major ethnicities, too."

"I think it is a wonderful idea to target demographic groups with scenarios they are comfortable and familiar with," says Jeff Elgin, CEO of franchise consulting firm FranChoice (and an Entrepreneur.com columnist). "A Spanish-speaking focus in a store that is in a largely Hispanic market area is certainly going to make many people more comfortable, and I suspect it will do a lot more business . . . We all like to shop with people who are like us, and [where] we feel our culture is perhaps more respected."

But don't call it a franchise. There are no franchise or royalty fees, and T-Mobile will even help owners with startup financing.

"We can provide startup capital," Clelland says. "We provide ongoing training support and field-level training. We provide all the tools you need to provide a consistent customer experience without the downside of being a franchisee."

The TPR concept is to take the ever-competitive mobile carrier wars to the streets of ethnic America, where T-Mobile hopes familial service and familiar languages will foster business goodwill. In this expansion, the days of the cluttered, independent cellular shop peddling several different carriers are over.

"As the category evolves, it has gone from multiple-carrier distributors--one store that would carry a lot of different brands--to exclusive relationships," Clelland says. "By working on a unique program focused on getting Hispanic and local operators that understand the culture, geography and consumers, we bring the brand to life in-store."

A medium-sized outlet like Massry's costs about $150,000 to open. Owners earn commission on each new customer contract, residual fees, bonuses at the end of two-year contract cycles, incentives for customers' phone upgrades, and profits on phone accessories.

T-Mobile courted Massry, who runs more than 50 record stores, because he has street-level intelligence on the Latino market. "We sought him out," says Lesley Hawks, T-Mobile's manager of partner acquisition.

At the same time, Massry, a former resident of Mexico who was born in the states, saw the wisdom in diversifying his retail empire: The record-store business is being pummeled by downloading. In fact, he's already converted some of the locales into T-Mobile retailers, and he has two more T-Mobile branches planned.

"In my stores," Massry says, "the first language is Spanish. The store looks and feels like a regular corporate store, but in their language. A Latino can feel comfortable here."