The 3 Words Your Customers Love Most

How you can implement these words into your marketing plan without sounding like a used-car salesman.

...Well, not quite THOSE words.

As it turns out, there are 3 words that your customers do LOVE to hear, but they are 3 distinct words which have nothing to do with your significant other.

Interesting behavioral research has revealed these "magic" words to be not so surprising choices, but perhaps unusual in their own sense for how effective they are.

Today you're going to get to look at the research and experiments that reveal what these words are and how to implement them into your marketing plan withoutsounding like a used-car salesman.

Beginning our list of not-so-shocking winners, it's not big news that "free" is a word that customers love; it's been used for decades as the #1 attention-getting word for every industry out there.

Today, free almost seems like an expectation, so how persuasive can it really be?

Despite it's overuse, "free" is indeed a very special concept, and according to research by Dan Ariely, our preference for it appears to be almost hardwired into our brains.

In an experiment described in his book Predictably Irrational, Ariely tells the tale of a battle between a Hershey's Kiss and a Lindt chocolate truffle. If you are unfamiliar with Lindt truffle's, they are a magnitude more expensive than a simple Hershey's Kiss, and generally considered to be much richer in taste.

In his tests, Ariely sought to reveal what differing levels of price would do to subjects choices between either the Kiss or the truffle.

In the first test, truffles could be bought for 15 cents (about half their usual cost), or subjects could choose a Kiss for 1 cent. Nearly 3/4th of the subjects chose the truffle, since they were getting a great deal and a superior product. 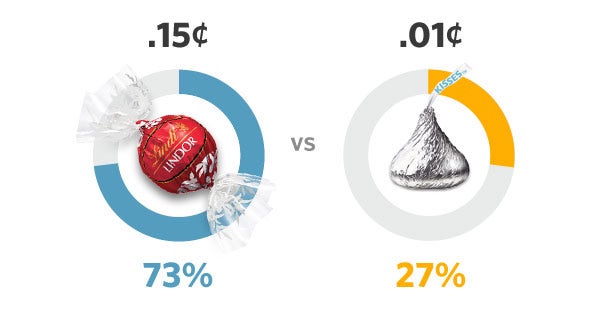 In the next test, the cost of each item was reduced by a single cent: 14 cents for the truffle, and 0 (free) for the Kiss. Although the difference in price remained exactlythe same (14 cents), the behavior of the subjects changed completely.

Subjects now chose the Kiss more than 2/3rd's of the time over the truffles. 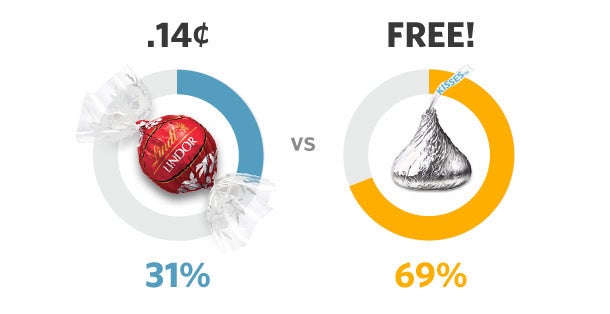 Ariely's conclusions point to loss aversion and our susceptibility for "low-hanging fruit" as the culprits. That is ...

We seek to avoid losses more-so than attaining gains, even when the loss is actually a great deal (the truffles being half-priced). We also have a tendency to seek out things that can be gained with minimal effort or expenditure.

In an additional showcase of the power of the word "free", Ariely covers an intriguing example from an international promotion that was made over at Amazon.com.

Related: The Psychology of Getting More Done (In Less Time)

During a time when Amazon launched a free shipping promotion for every customer who purchased a 2nd book, every single country except France had shown a huge jump in sales.

What was it with the French? Did they not like books? Was the marketing strategy coming up short? Were the French consumers not all that impressed with the deal?

None of the above: as it turns out, in France the promotion had a slight alteration. Instead of the shipping being "FREE!" with a second book, it was only reduced down to a single franc (about 20 cents).

When it comes to buying ~$15 books, the change was negligible in relation to the final cost.

When it came to performance though, it mattered big time: with the 1 franc charge attached to the French promotion, Amazon saw no (that's ZERO) increase in sales.

When things were fixed, the sales jumped to the results achieved in every other country, a notable display of the power of the word "free".

When utilizing "free" in your own business, the only things you want to avoid are false promises and turning your customers into "bargain hunters" rather than value seekers.

Don't hurt the longstanding prices and perceived value of your own products by attaching "free" to everything in sight, but do be aware of instances like the one Amazon ran into:

Related: Lessons in Customer Service From the World's Most Beloved Companies

Charges you deem to be insignificant can often hold back sales since they take away the opportunity to promote something that is "free" for customers.

We've seen the power that free mints can have on customer's willingness to tip, and you can be sure that the fact that they were free was an essential aspect of their usefulness: few people would have been willing to pay for them, and the personalized power they hold would have been a moot point.

Again, not so surprising, but if there's one thing our brains love, it's solving our pain-points "instantly".

The ability to delay gratification is a trait that many researchers have said is paramount to being a successful, healthy individual. If you are familiar with the famous "marshmallow experiment", you'll recall that researchers found those kids who were able to defer their gratification increased their likelihood of becoming successful adults.

What the heck does this have to do with your business?

The reason that deferred gratification is such a hot topic is because our brains are known to love chasing instant rewards: several MRI studies have shown that it'sthe frontal cortex that fires up when we think about "waiting" for something.

When we think about an instant reward, however, activity occurs in our mid-brain, and that's what gets us primed to buy.

Words like "instant", "immediately", or even "fast" are known to flip the switch on that mid-brain activity.

The temptation to fix our problems instantly even works on conservative spenders, so you can be sure that your customers are much more likely to give your product a chance if they know they won't have to "defer" their gratification to a later date.

Even if you aren't able to ship things immediately (not everyone sells digital goods), reminding your customers that their purchase will arrive "quickly" can be the small-push needed to make the sale.

While many of these words recall those cheesy local commercials promoting their bottom dollar prices in big red font, I want to remind you that implementation is totally dependent on your target customer: it's the words that hold the power, not the yellow highlighter on that corny advertisement.

That being said, yet another perennial entry of attention grabbing words again makes this list of words our customers love to hear. "New!" has worked for a long time in sales and will continue to do so forever... but why?

Thanks to those clever neuroscientists, we now know that the word "new" holds it's power due to it's appeal to novelty: things that are new activate our brain's reward center, whereas novelty tends to die off quickly in material purchases (much faster than "experiential" purchases).

Related: 10 Insights on Building, Motivating and Managing an Exceptional Team

What's a small-business owner to do?

First thing to remember is this: while novelty plays a huge role in breaking out of the static of selling the same old product, there is a TON of value in maintaining a familiar brand with customers.

In fact, MRI studies have shown that our brains respond better to brand names than to novel brands. Remember the disaster that was New Coke? Novelty doesn't always have it's place.

This is perhaps why it is the most difficult word to utilize. Successfully implementing it in your marketing efforts relies on you NOT changing those defining characteristics of your business that are notable for their consistent nature: your overall unique selling proposition, your exceptional customer service, the quality of your products, etc.

When it comes to the many core aspects that give your business the good reputation it has, you can fall back to the old adage of, "If it ain't broke, don't fix it it."

The best way to incorporate novelty is to avoid becoming stagnant in the eyes of your customers: new products, new improvements, new features, new branding (with the same core values), new fixes to old problems, and new ways of getting your message out there (Red Bull's recent skydive event, as an extreme example!).

A version of this article first appeared at HelpScout.net.