This Startup Aims to Save Brands From Marketing Disasters

By Laura Entis
January 1, 2016
Opinions expressed by Entrepreneur contributors are their own.

When Eran Eyal arrived at Techstars New York office on a balmy Tuesday evening in August, he was emotionally drained. It shouldn't have been like this -- as one of seven founders or founding teams selected to pitch their startups to a roster of experienced judges, he should have been confident and excited.

But these weren't normal circumstances. The weekend before he'd received two separate pieces of devastating personal news. "The bomb dropped on me Sunday night," he says. "I spent most of Tuesday in a bad state, but I pulled my shit together and went down to pitch night."

He was up first, and immediately ran into technological problems (his slides weren't working). The pitch itself was a blur. He considered leaving halfway through the other founders' presentations, but ultimately stayed "out of respect." When it came time for the audience to select a winner, he voted for another startup.

Despite giving away his vote, the slide issue and his erratic mood, Eyal won. His presentation wasn't the most polished (it was rushed) and he wasn't the most charismatic speaker (he seemed distracted). But his startup presented an innovative solution to a real problem -- one to which the judges clearly responded.

"Our objective is to become the creative utility for brands and agencies looking to get better intelligence on a market 10 times faster than they can get it from any research house today," Eyal said, kicking off his presentation for Springleap at pitch night.

By upending the fundamental tenet of market research, which relies on consumer sentiment, Springleap works to be a faster, cheaper, more efficient way for companies to gain actionable marketing insights.

In the place of consumers, Eyal and co-founder Trevor Wolfe have built an invite-only marketplace of more than 180,000 marketing and advertising professionals from around the world. Brands can tap into this network for a range of specific needs, such as receiving feedback on copy, highlighting local trends or vetting strategies for a new market launch. 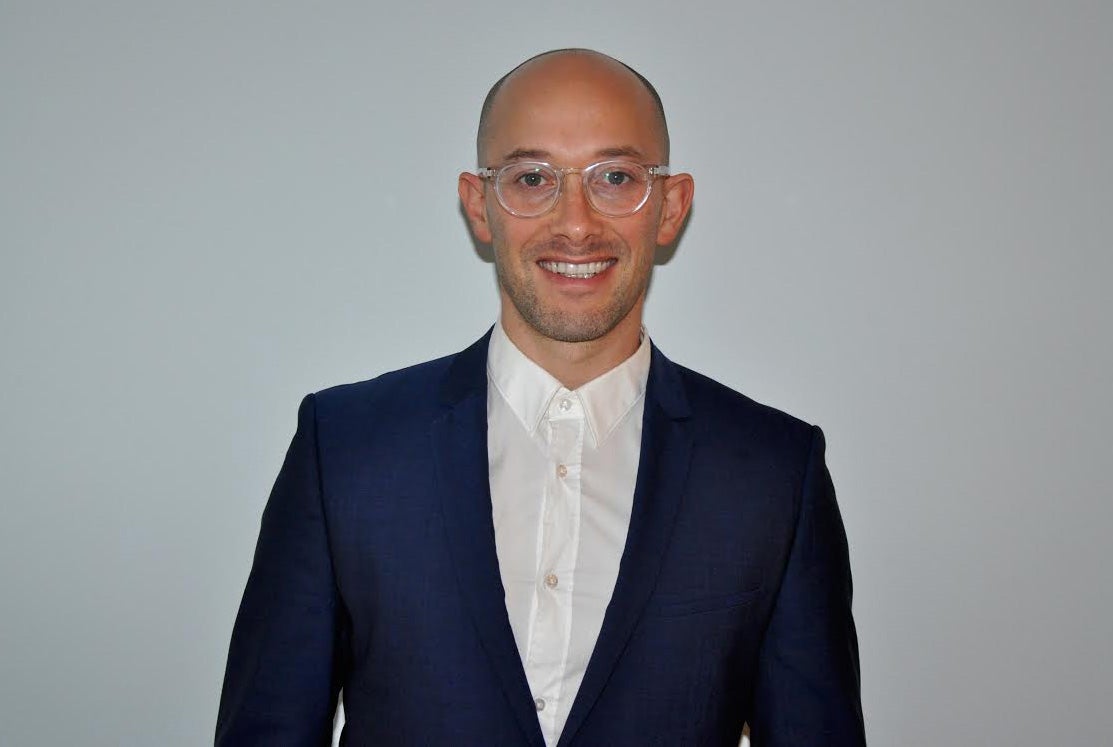 "Normal people change their minds later that day depending on what coffee they had and they can't substantiate why they feel the way they do," Eyal says. "Our hypothesis is that speaking with an advertising brand executive is better than speaking with the public."

Related: The Do's and Don'ts of Acing a Pitch Competition

It's a fair one, according to Derek Rucker, a marketing professor at Northwestern's Kellogg School of Management. "'A lot of people don't know what they want until you show it to them,'" he says, quoting Steve Jobs. For a range of marketing questions, turning to a group of agency executives who have a "finger firmly on the pulse" of the advertising landscape in lieu of the general public is a smart strategy.

If a company is attempting to enter the soda market, for example, polling a group of informed experts -- who have extensive knowledge of the major industry players, trends and failed past campaigns -- for actionable insights will be more useful than polling people on the street.

That said, certain questions can only really be answered by consumers. Take the above soda scenario: say the company launches its beverage, which flops. It therefore needs to determine whether the poor sales are due to an issue of taste or perception. While an expert would be able to speculate, Rucker says, the answer ultimately requires traditional market research, in this case a blind taste test to figure out whether consumers "are fine with the taste but don't like the brand" or vice versa.

Eyal says that most clients do, in fact, use Springleap in conjunction with consumer feedback. But by pairing expert insights with fast turnaround times (three to seven days as opposed to more than a month, which Eyal cites as the industry standard), the company can do what traditional market research often can't: save brands from marketing disasters.

Take the following real-world example, which Eyal relayed to the judges at pitch night: After a successful launch in South Africa, a whiskey company wanted to use the same campaign to enter four new African markets. "What they didn't realize was that if they had launched in Nigeria, they would have lost all their money," because the campaign was based on shared success, a concept that apparently doesn't exist in Nigerian culture (people there subscribe to the belief that individuals are responsible for rising to the top on his or her own).

"It's not about a 25 or 30 percent increase in return on investment," he says. "It's about total loss of your money because you don't have a sufficient cultural understanding."

The beauty of Springleap's network is that it provides brands access to marketing professionals -- including employees at local branches of big name agencies such as Saatchi & Saatchi and Ogilvy -- who can immediately pinpoint areas or concepts that won't survive a similar cultural transplantation.

But Springleap's premise depends on its ability to connect brands with the right people, Rucker says. "This model has potential legs to answer the right questions," he says, but only if advertising executives with applicable expertise and skillsets are being tapped for each project. Otherwise, the model falls apart.

To use Springleap, a company highlights a marketing task, and specifies the type of experts it would like to work on it. It's possible to filter by skillset, specialty, location and background, among other metrics. Springleap's experts are screened to ensure there's no underlying conflict of interest, i.e. they're not employed by a competing agency. Experts in the network are then paid $50 to $150 per hour to work to complete the project. 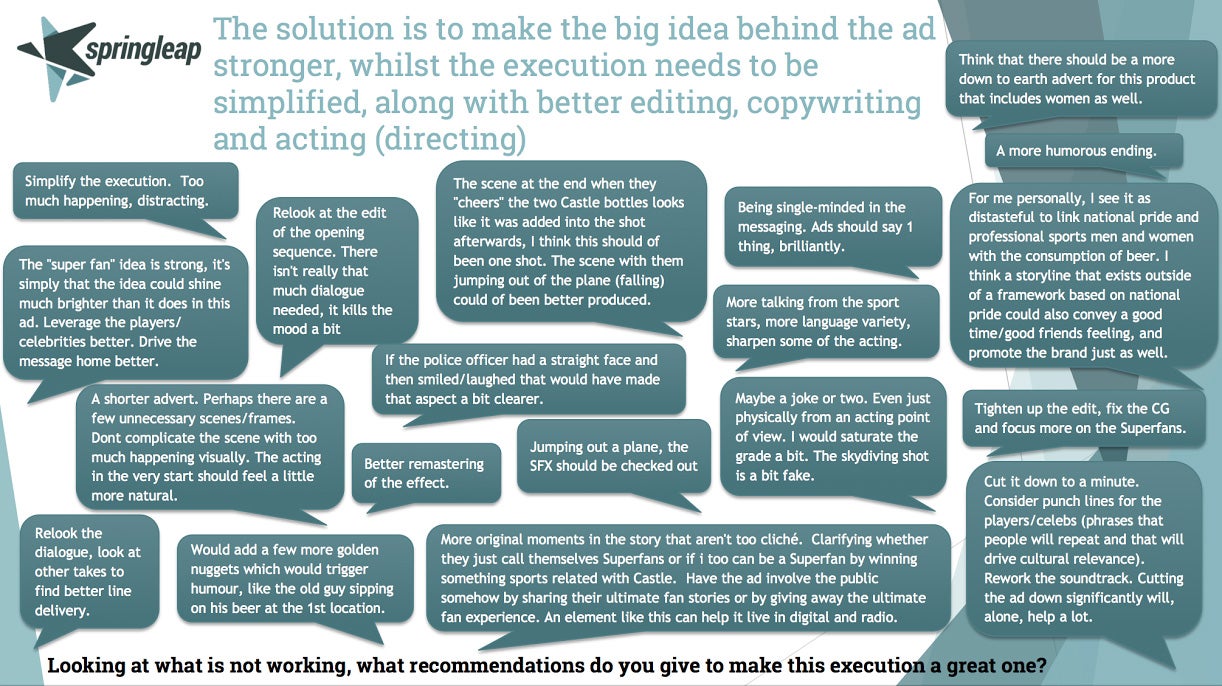 While the number of experts selected depends on the project and client, Eyal has found that 30 is generally a good number.

Clients are then presented with a neatly compiled aggregated report as well as the raw data, which they can use to rate each expert based on his or her individual responses.

Jay Levy, co-founder and partner at the venture capital firm Zelkova Ventures, was a judge at the Techstars pitch night. He sees the value Springleap's model can bring for big brands but also sees obstacles, most pressingly, "how to keep the talent from going directly to the client after the initial contact has been made."

To combat this, Springleap strips its expert network of personal information, but Levy worries keeping identities entirely anonymous will be tricky. Companies, understandably, will demand information on the people providing them with feedback, including work history, current occupations and specialty areas (this ties back to Rucker's previous point: for effective insights, businesses need to know they are accessing the right people for the job).

Levy says "It's a double-edged sword": If Springleap provides too many of these markers, it's all too easy for the client to uncover relevant experts and reach out to them directly.

For all Eyal's grand ambitions to "change the way market research is being done today," Springleap is still a small, scrappy startup. When I spoke with him in late August, the company had completed just 40 projects. Growth has been slow -- while Springleap has since added a few big-name clients including Unilever, Sony, Estée Lauder and Barclays, it has only completed an additional 20.

Like any good entrepreneur, Eyal has high hopes for his company. But first, Springleap needs to gain traction. ("The supply is out there," Levy says. "They will prove their business by generating demand.") Despite plans to raise $1.3 million by the end of September, the company did not close its initial seed round. Instead, it is launching a new $2.4 million seed round that Eyal hopes to close at the end of January. If successful, the company will invest in hiring more salespeople and expanding its number of clients over the next 18 months, in part by adding new, cheaper automated options for small-to-medium-sized business.

Despite a committed $600,000, there's no guarantee that this round will close any faster than the initial attempt. Eyal, however, is undeterred by the obstacles that lay ahead. Opportunities have a way of presenting themselves. Just take pitch night.

"I felt it was one of the crappiest pitches I ever did in my life, but you have an opportunity," he says. "Outside of anything else, just be respectful of the opportunity and show up."