What Craft Beer Can Teach You About Business Growth: Best Advice from Jim Koch of Sam Adams

The Boston-based entrepreneur who created the Sam Adams Lager has long been a master of beer, and he has become an expert in how to grow a business. He has transformed a kitchen-table venture into a 950-employee company which had total revenues of almost $630 million in 2012. 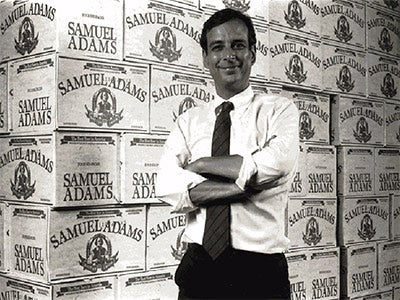 Koch with some of his first cases of Sam Adams beer.
Image credit: The Boston Beer Co.

In the very early days, Koch was continually turned down by traditional banks when he applied for loans and he struggled to get a distributor interested in his craft brew. To support young entrepreneurs, The Boston Beer Co. launched a program providing microloans and counseling to small food, beverage and hospitality companies considered unbankable by traditional lenders.

The program, Samuel Adams Brewing the American Dream, is expanding this year. This week, Boston Beer announced that it is committed to providing an additional $1 million in microloans to 100 new small-businesses, on top of the $2 million that it has already lent out since the program's inception in 2008. Also this year, the program will solicit donations from draft beer sales at participating bars and will increase its skills coaching for entrepreneurs looking to pitch their food or beverage to large retailers and restaurants.

As part of the initiative, Boston Beer hosts speed coaching sessions across the U.S. where approximately 50 entrepreneurs meet at local community centers or restaurants to get advice and support for pain points in their business growth. Specialists from within Boston Beer and expert volunteers meet with small-business owners 20 minutes at a time to talk through problems and solutions.

Koch is on hand at the speed coaching sessions, and his area of expertise is growth management. After 29 years at the helm of the brewhouse, Koch has learned a few lessons of how to grow a business sustainably. Here are the three pieces of advice he gives out the most frequently to entrepreneurs.

The larger and more profitable your business becomes, the more focused you should become on the ingredients in and production of your product. "As you grow, you should get better," says Koch. Even as Sam Adams grew into the largest-selling craft brew in the U.S., its primary focus has always been the quality of the beer it brews.

Cash-strapped startups may not be able to afford the highest quality ingredients or the best equipment right off the bat, but as you begin to make money, reinvest in your process, he says. "Don't take your eye off the product," says Koch.

Especially in the earliest days of your company, don't bring on a new employee from a place of desperation because you feel overwhelmed and need more hands. "If you are three people and you go to four, that changes the character of your company," Koch says. If a new employee is not working out for your company culture, let them go quickly. The smaller a team is, the less it can afford to carry unproductive employees, he says.

To find the right candidate, interviewing employees is not enough. Look beyond a resume. "When we started at Sam Adams, we almost never hired people from the beer business because they have too many bad habits," Koch says. Instead, he was looking for individuals with the behaviors, talents and motivations that would make them trainable.

Koch recommends offering to pay a potential new hire to work alongside you for a day to help you evaluate the candidate's personality and skills. "What we have learned is that if people truly enjoy doing the things that they will need to do well to be successful in a job, they will succeed. If they enjoy those things. If they don't, it is not going to have a good outcome," he says.

3. You are the best salesperson for your business.

"Nobody loves your product better than you do. Nobody is more passionate about it. You are going to be -- like it or not -- you are going to be the best salesperson for the product," says Koch. Almost three decades ago, when Koch was getting Sam Adams off the ground, he went from bar to bar with cold beer in his briefcase selling his brew to bartenders. "I had never sold anything in my life, I was scared to death."

Koch didn't know how to sell effectively, and he was turned off by the typical salesman role models he knew of, namely used-car salesmen or Willy Loman, the main character of Arthur Miller's "tragedy of the common man," Death of a Salesman. Over time, Koch learned that selling is really about figuring out how your product can solve a customer's problems.

With Sam Adams, Koch pitched Bostonian bartenders by telling them that they could sell Sam Adams for 50 cents more than a regular beer but it only cost them 40 cents more to buy. Also, a craft brew on the menu makes a restaurant or bar an attraction for consumers, he told bartenders. "Once you get to the win-win, selling is easy," Koch says.

What's the most valuable piece of advice you have learned about how to grow your business? Leave a note below and share it with your fellow entrepreneurs.