If you spend some time at Servcorp's space in One World Trade Center, you'll observe a stunning view of New York City and a tranquil silence. Eighty-five stories above Manhattan's Financial District, you'll scarcely hear a blaring siren or honking horn.

Although it's partly a coworking space, denim-clad twentysomethings are conspicuously absent. Servcorp's 155 locations around the world bare no resemblance to college dorm common spaces, archetypal tech startup offices or contemporary cafeterias -- think fewer hashtags and foosball tables, more red carpeting and marble. Many are in iconic high-rise buildings, and they're meant to appeal to a professional clientele that seeks a more formal, or, as Chief Operating Officer Marcus Moufarrige describes it, "premium" experience.

If it seems that WeWork is the elephant in the room, it's not. Moufarrige openly compares his business, founded by his father, Alf (who still serves as CEO), in 1978 and publicly listed on the Australian Stock Exchange since 1999, to the comparatively nascent WeWork (founded in 2010). Until recently, Servcorp's website even featured a page called "Servcorp vs WeWork" detailing the differences between the two.

"Right now, people think it's all about this new business model that is WeWork, but it's actually an old business model that's just being marketed really well," Moufarrige says. "The broader base of this industry has grown, which is a great opportunity for us. We want to make sure that we take advantage of the growth in that marketplace and that people understand that there is a premium offering as well."

The global flexible workspace market was valued at $27 billion in 2016, up from $14 billion in 2012, according to a report by Daedel Research, and it's projected to reach $44 billion by 2021. However, a substantial share of that valuation -- $18 billion -- belongs to the prodigious WeWork, in which Japanese giant SoftBank invested $300 million in March. By comparison, Servcorp's stock price sits at more than $4, it has a market cap of about $431 million and generated $239 million in revenue in 2016.

Factors that have contributed to the rapid growth in the flexible workspace sector include global business expansion and the rise of alternative work patterns -- both fueled by technological advancement -- as well as cost efficiency for small companies, especially amid an uncertain economic environment.

In this crowded market, Moufarrige emphasizes that Servcorp's differentiator is the access it provides to prominent addresses, executive assistants and telecommunications services. It distances itself from competitors that play up the value of community and hanging out in common spaces.

Moufarrige notes that the company has a particularly strong presence in the Middle East and Asia but says he wants to grow its U.S. footprint, though he doesn't want to "take over the world" and open thousands of locations. He wants to focus on the niche Servcorp occupies while growing in the U.S. to a modest 50 to 80 locations, up from 22 today. Earlier this year, he even relocated his family from their native Australia to New York with this goal in mind.

Personalization via automation
Over the years, Servcorp has had the likes of Lyft, Morgan Stanley, J.P. Morgan and Cartier as clients. The company offers a variety of flexible workspace packages, including executive suites, which start at $1,000 per month in the U.S. and are typically for mature businesses that want access to a furnished office space without signing a multi-year lease. The features included within this package overlap slightly with the other major category of Servcorp's business: virtual offices. 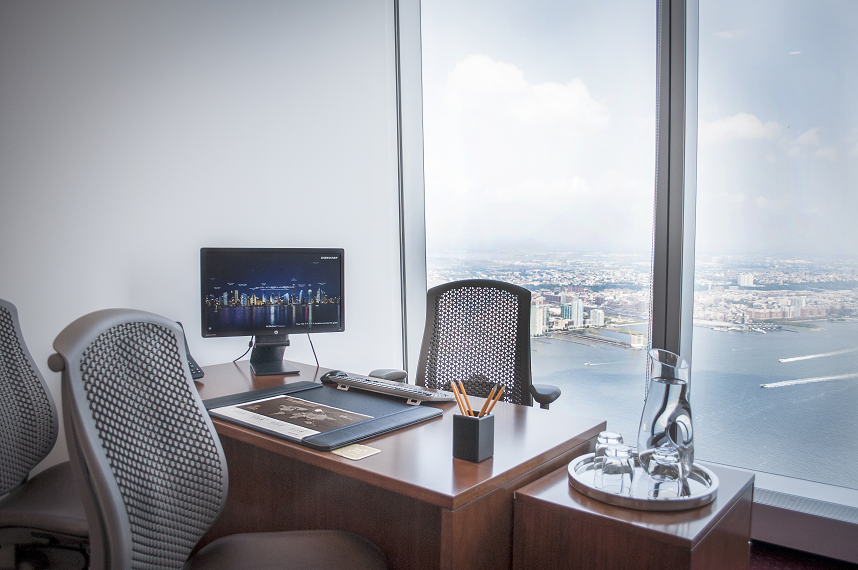 Virtual office clients are more likely to be small startups, or as Moufarrige calls them, "one-man bands." They pay $250 a month at minimum. Most work from their homes. The amount of time they can spend in a physical Servcorp space is more limited than for executive suite clients. However, they may put a prestigious address such as One World Trade Center on their business cards and letterhead. Servcorp has 8,000 virtual office clients in the U.S. and 45,000 globally.

Servcorp identifies itself as "the recognized world leader in shared workspace technology solutions," which might be surprising to visitors to its website. The site's design differs from the Squarespace-esque look of many tech startups today. It's difficult to distinguish the differences among the features of Servcorp's various client packages. By comparison, WeWork's online display of its offerings is easier to digest.

When Servcorp talks about the importance of first impressions, it's referring to its office building addresses, as well as the fact that clients get a Servcorp employee to be their receptionist. They also get IT and secretarial support. One receptionist can handle a few hundred clients, who enter their information into a database. When a call comes in to a client's phone line, information about that Servcorp client populates a computer interface, along with preferences for how they want the call fielded.

"It's not a call center," Moufarrige explains. "You know who your receptionist is. You can call them, you can talk to them, and the person who you sign up for is the person who's going to be answering your calls. So it's a very personalized service."

Brittany Pizzuta has worked for Servcorp for six and a half years. She started as a receptionist and now works as a senior executive assistant. Pizzuta balances several companies and their clients through research, note-taking and monthly check-ins or "happy calls." For some clients, she runs errands or books appointments.

"We have a company that manufactures certain products, and I'm very knowledgable in what they do," Pizzuta says, "If I can answer questions about certain products, the caller truly does believe I work for that company, because I'm able to give them the correct answer."

Moufarrige notes that startups that hire before they have enough income end up risking their employees' jobs. "Having a workforce on tap that doesn't work for you that you can use on a short-term basis or on demand is a really powerful thing for a small business," he says. But Servcorp's on-demand support staff don't just help others launch their careers. Moufarrige emphasizes that 80 percent of Servcorp's managerial employees -- most of them women -- started in receptionist and secretarial roles and worked their way up. For example, Moufarrige says the general manager of the Australia/New Zealand division has been working for Servcorp for 36 years -- since she dropped out of high school. Others have gone on to run companies of their own.

A different kind of community
While Servcorp emphasizes personalization, it doesn't sell itself on networking or relationship-building. Unlike WeWork coworking spaces, in which teams from multiple different companies share an office floor, Servcorp isn't about fraternizing.

On its website, WeWork calls itself "a global network of workspaces where companies grow together" and "CEOs can help each other." Its argument is, "Whether it's getting feedback on your product in real time, asking for a recommendation on a service provider or simply grabbing a beer after work, the power of our community is invaluable."

Moufarrige disagrees with this philosophy.

"We don't think that community or collaboration makes your business successful," Moufarrige says. "You can be patted on the back as much as you like, but if people aren't answering your phone, and you don't have great internet and you don't have a great address with a great first impression, you're not going to have the trust. People aren't going to buy your product as quickly or as easily."

Related: 3 Reasons to Chuck Coworking and Get a Real Office

Moufarrige does note that he's learned a lot about the power of leveraging community from WeWork, but that his point of view about how to do so differs greatly. For example, Servcorp's global network of team members who work with international clients can reach out to employees in another country for travel tips to relay to the clients they work with. The next step, Moufarrige says, is a professional network of the company's 45,000 virtual office clients globally.

"We think we've built a really fantastic platform for that, using technology rather than just sitting around the campfire singing "Kumbaya,'" Moufarrige says. "That community is actually much broader than the people who you sit around in the lobby with." 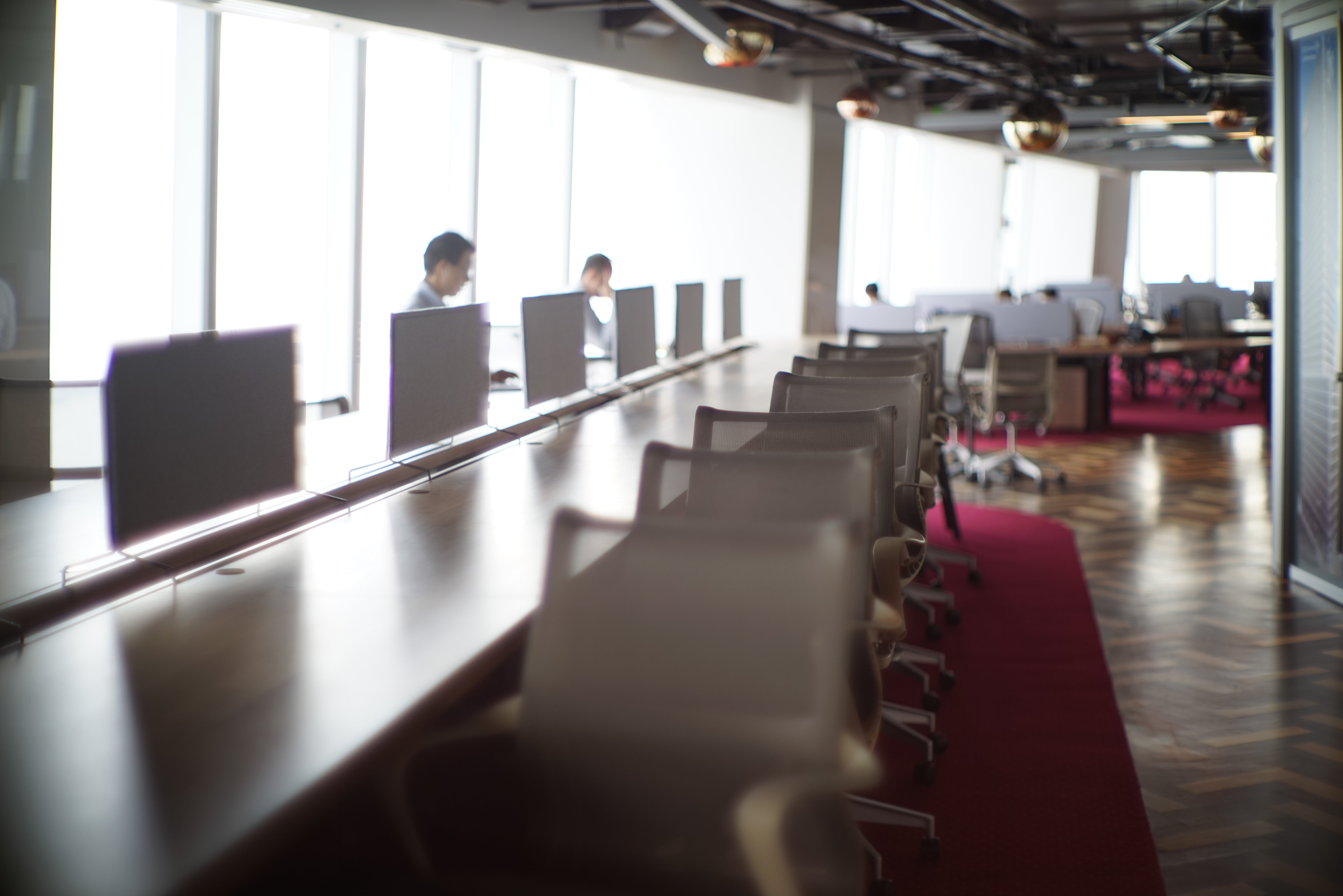 His clients apparently agree. As Moufarrige works to expand Servcorp's U.S. footprint, he says he's had casual conversations with a few World Trade Center clients and encouraged them to spread the word. They've replied that they like it quiet on the 85th floor. So in its efforts to grow within the U.S., Servcorp will use its global community platform as a selling point going forward. The company is also going to do more targeted advertising via Facebook and Google, though Moufarrige says Servcorp is "not necessarily targeting millennials." Instead, it's targeting businesses based on their flexible workspace needs.

Above all, Servcorp is hoping that its amenities and prominent locations in city centers will continue to draw professional clients. As remote work and coworking become more common, the longtime player hopes to take advantage of its field's newfound prominence.

"I think there will always be a need for the personal touch. There will always be a requirement for service," Moufarrige says. "If people are focusing more on the customers than getting stupid tasks done like booking meeting rooms, then you're going to find that the level of service is a much better experience."