The new film 'Framing John DeLorean' asks if the car entrepreneur was a visionary or a crook. Or both?

These are just some of the descriptives applied to John DeLorean (1925-2005) in the new documentary Framing John DeLorean, which had its Tribeca Film Festival premiere this week. The inventive half-documentary/half-biopic stars Alec Baldwin as the legendary auto industry executive, engineer and designer behind American muscle car, the GTO, and most famously, the DeLorean -- a stainless steel sports car for the masses that the entrepreneur poured his life and money into. (Yes, that's the same DeLorean that served as Doc's time machine piloted by Michael J. Fox in the 1985 movie classic, Back to the Future.)

DeLorean's life had more than its share of bumps in the road. His playboy image, his obsession with his looks and his much younger wives rankled the execs at GM so much they pushed him out. And the DeLorean car had so many unsolved engineering problems that the cars -- made in Belfast during Ireland's "Troubles" -- remained unsold and piled up, as described in the movie, like plague rats on the wharves.

This automotive entrepreneur believed his own legend so fervently that to solve his epic money problems, he took extreme measures. DeLorean got caught up in a $24 million cocaine sting, then faced charges of embezzling $17 million dollars. He served no jail time, but in a stunning fall, went from multimillionaire to penniless old man, dying in a modest apartment in Morristown, NJ., in 2005.

So, who was John DeLorean? Entrepreneur conducted a series of interviews with the creators behind the documentary: co-directors Sheena Joyce and Don Argott, actors Alec Baldwin and Morena Baccarin and producer and DeLorean historian Tamir Arlon to find out.

In Framing John DeLorean, you offer the audience various versions of who this man was. What is your personal version?

Alec Baldwin: The most lasting impression I have of him is someone whose ego and self-seeking was such that he was incapable of relying on other people. He just insisted that he could do all the jobs involved with running a car company. At GM, he was a legendary designer and he had tremendous success at that. When the time came for him to launch this company, there were things he should not have been doing: a designer is not somebody who runs a car company. He should have stayed in his lane and done what he was supposed to do and had partners who could help him. He was not a collaborative guy. He wanted his name on the car and he wanted to make all the top decisions. He was somebody who wouldn't admit what he didn't know, and that's what wound up getting him in trouble in the first place.

Was DeLorean a good guy? A bad guy? A narcissist?

Morena Baccarin [who plays DeLorean's wife Cristina Ferrare]: All of the above. I kept asking everybody [on the film], "What do you think happened?" And the fact that we kept asking each other that shows it's complicated. Everyone has aspects of who they are and who they are with other people. And interviewing his wife and trying to play his wife and digging for the footage...who knows what happened inside their marriage and inside their lives? She said nothing but wonderful things about him on the phone. I'm sure there's more to it than that.

DeLorean was acquitted of the cocaine charges, arguing entrapment by an overzealous FBI. Considering how desperate he was to save his cash-strapped company at that point, would you have given him a pass?

Baldwin: No. Anybody who is going to sell drugs in order to finance his automotive company is insane. Again, he dodged that out of an entrapment defense and it was successful, but ultimately he was nailed for other things he did, other financial impropriety. But for anybody to say, "I want to put new astroturf on the field at my kid's high school, I'll go deal some cocaine" -- no matter how well-meaning your attentions are, no matter how worthy the cause, what he did is just crazy and a sign of where he'd gotten himself. DeLorean is somebody whose issues start very early on: plastic surgery and the aggressive way he wanted to manipulate public opinion of him, this kind of Marlboro Man composure he had: tall, lean, very handsome in the hair, and the young wife -- a couple of young wives -- all of those things were psychological markers of where he was headed. He was a guy he had his eye on the wrong thing and he wanted to be a star in the corporate world and the business world and the industrial world and he played it perfectly. 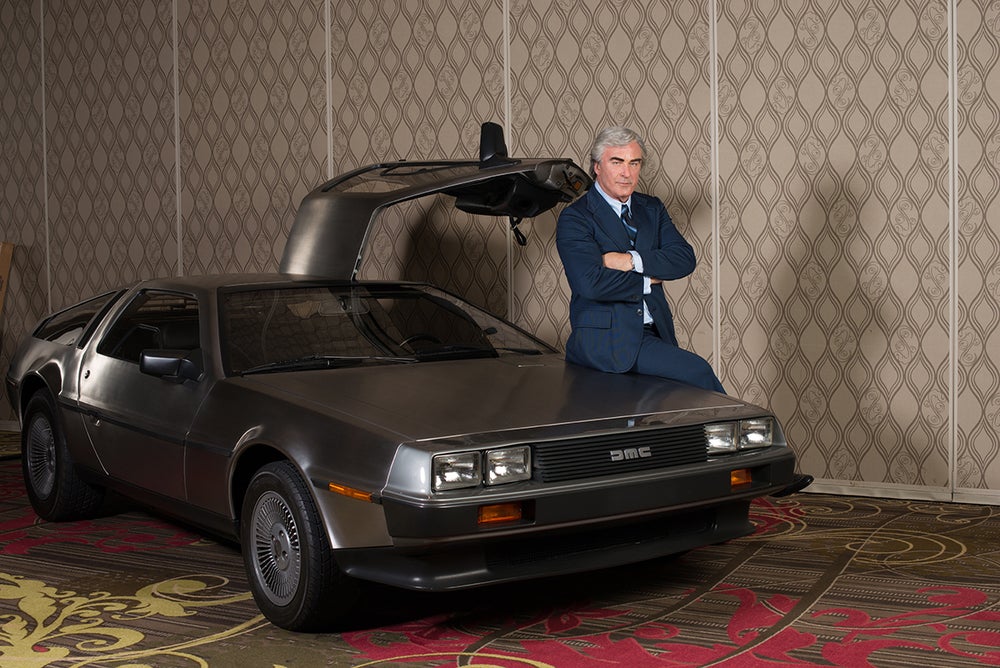 Repeated efforts have been made to put together a standard biopic about DeLorean. This film, in contrast, combines documentary news footage with re-enactments of key events. You even show the star, Alec Baldwin, in a makeup chair being fitted with facial prosthetics and black eyebrows, addressing the camera and discussing his scenes. What do you call this movie genre?

Don Argott: How we approached the material was to use all the kinds of tools at our disposal: the documentary form, the narrative form, and try to dive deeper into this actual character and the people surrounding him, to get to know him a little bit better.

Baldwin: I did not want to "break the fourth wall" and talk to the camera. That did not interest me, but I'm a fan of [Joyce and Argott]; I loved The Art of the Steal, one of my favorite documentaries. And they sold me on the idea -- which I was not so keen on because I thought it would affect how you "saw" me doing DeLorean. From my point of view as an actor, I wanted you to only see me as DeLorean and judge me from that. To have me talking about what I was doing, I thought was a little risky; I was a little worried about that.

The movie portrays the DeLorean car's engineering issues. In one newsreel from that period, a car is coming off a ship, and one of those famous gull-wing doors flies off. The vehicle is labeled "a product warranty nightmare." Was the DeLorean a dud?

Tamir Ardon [who knew DeLorean personally and built a DeLorean resource website]: You have to remember that it was a brand new car company with a new [Northern Irish] workforce, assembling vehicles for the first time. You're always going to have trouble with first runs of vehicles. Established carmakers today have problems with cars when they first come out. By a year or two later, they had worked out the problems with doors, batteries, alternators -- though there's a famous story of how Johnny Carson was stranded by the side of the road when he picked up his DeLorean because the alternator wasn't working. What's amazing today is that 35 years later, there are still DeLoreans on the road, with over 800,000 miles on them, and I see these cars at my DeLorean shows, and they look brand new.

There were some fun facts that made have helped get this film made, one of which involved a phone call Baldwin received ...

Baldwin: It was about 2002, 2003; DeLorean died in 2005. So it was a couple of years before that, that he called me. And of course, when people do that, you think "Somebody is pulling my leg." But it was him. The conversation was short -- 10 minutes long [in which DeLorean asked Baldwin to play him in a movie]. When somebody, a contemporary, is going to be rendered in a film, it's flattering that they ask you to do that. And I was sorry we never made the film because what happened to John is a great example of what's happened in this country, which is that there are people who don't think about the circumstances of other people's lives. They're greedy with the things that they do. John hurt a lot of people.

In terms of DeLorean's legacy as an entrepreneur -- the good part -- how does he stack up against an Elon Musk or Richard Branson?

Joyce: He was a brilliant man and an innovator and amazing engineer, and I think it's unfortunate that the scandal clouds those things about him. I forget how many patents he still holds, but over 100. They say -- and I haven't verified this -- that there's not a car on the road that doesn't have something John DeLorean made in it. He really should be in the Automotive Hall of Fame for his contributions to the industry.

Related: 3 Insights From Elon Musk's Chief Automotive Designer You Can Apply to Life and Business

Do you think he could have launched another DMC?

Argott: He was trying to. To me, the entrepreneur aspect is that John was a dreamer, and it's like the film gets into the aspect most people can relate to, which is, how far are you willing to go to for your dreams? So many people have criticized him by saying, "How stupid do you have to be to get wrapped up in a cocaine sting?" But you'd be surprised: Desperate people do crazy things. He really wanted to make it work.