By Jason Fell
March 15, 2011
Opinions expressed by Entrepreneur contributors are their own.

Getting a startup off the ground and finding funds to grow it is a challenge, especially when pitching your venture to an intimidating, five-person panel of investors. Nevertheless, a group of aspiring entrepreneurs will take their chances starting March 25, during season two of ABC's reality series, Shark Tank. This year, the panel, otherwise known as "sharks," will offer more than $10 million in funding to help bankroll startups.

Joining them this season is someone who knows a thing or two about starting businesses: Mark Cuban. The billionaire entrepreneur, tech trailblazer and blogger is set to appear in three episodes of Shark Tank's nine-episode season. 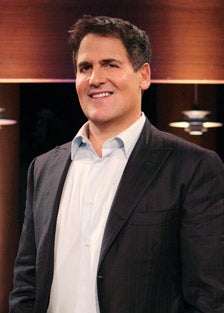 A quick rundown of Cuban's resume: He says he kicked off his entrepreneurial career at age 12 selling garbage bags (yes, really) door-to-door. Following a string of self-started ventures through college, Cuban launched a hardware and software integration company called MicroSolutions, which he sold to CompuServe in 1990. Within five years, he co-founded web radio company Broadcast.com, which Yahoo Inc. acquired in 2000 for nearly $6 billion in stock. Today, at age 52, Cuban is known as the often outspoken owner of the Dallas Mavericks basketball team and chairman of cable network HDNet.

He says he joined the reality show in part for the excitement of sparring over investments in startups. "Shark Tank turned investing into a sport," Cuban says. "Not only did I have to make quick decisions on whether to invest in an idea, but I had to compete with the other Sharks for the best ideas."

Of course, only a small number of startups will get the chance to pitch the show's panel. With this in mind, Cuban offers his top three tips for making it in the small-business world.

1. Treat your customers like they own you, because they do.
No matter how big your business gets, you never actually own it, according to Cuban. Your customers are the true owners, he says. "It is so much easier to be nice, to be respectful, to put yourself in your customers' shoes and try to understand how you might help them before they ask for help, than it is to try to mend a broken customer relationship," Cuban says.

One important way to keep customers happy is to be accessible. "In every business I have had, I have made sure my customers have had my email address and can reach me directly," Cuban says. "I've given my email address out on national TV. Customers of any of our businesses can and do email me with questions and comments. Each and every email is an opportunity for me to solidify a customer relationship or to add a new customer. I'm shocked that more entrepreneurs don't do the same."

2. Find your weaknesses before competitors do. It's not enough to bring your business idea to market. Cuban says you have to be steps ahead of the competitors who are trying to take your market share.

"If you have a business that competes with one of mine, I am going to try to kick your --- and put you out of business," he says. "I presume that you are trying to do the same thing [to me]…which is why I always try to look at each of my businesses from the perspective of my competition. I think, 'If I wanted to put my company out of business, what would I do? If I wanted to take customers away, what would I, as a competitor, do?' "

Related: Use SWOT to Kick-Start Your Planning

3. The best startup capital is 'sweat equity.' There's no room for excuses when launching a business. Not having much startup money or lacking a cache of professional connections should never stand in the way, Cuban says.

"Great entrepreneurs invest the time, no matter how many hours a day, to learn more about their industry and the business they want to start than any one else," he says. "They realize that ramen noodles and macaroni and cheese are the fuel they need because every other penny they get from working that night job is going to fund their business."

And Cuban says he knows all too well about making those sacrifices. "When I started MicroSolutions, I had just been fired from my last job and was living in a three-bedroom apartment with five other guys," he recalls. "I slept on the floor. My dinner was usually the late chicken dinner at Tom Thumb for $1.29. . . .It allowed me to stay focused on turning MicroSolutions into a $30 million business."

Related: What Is 'Sweat Equity' and How Does It Work?