It seems oddly poetic that a team of female entrepreneurs is hatching a plot to upend the e-reader industry with a brand new iPhone app called Rooster.

And the world of literary fiction -- digital or otherwise -- is one in desperate need of upending. According to the National Endowment for the Arts, in 2012, less than half of American adults had read at least one work of literature.

This is largely due to a consumption format unbefitting today's tech-obsessed, time-pressed reader, says Rooster's co-founder and CEO, Jennifer Lee.

Much in the same way that episodic television has emerged as a preferable medium over film in recent years, Lee believes that the literary world should follow suit.

Related: 5 Must-Read Books For Every Entrepreneur

Rooster's main point of difference is that it serializes works of fiction and delivers readers 15-minute installments at a time -- not unlike a TV series. Perused during a morning commute or over a coffee break, for example, the aim is to make reading a more seamless part of everyday life.

Rather than formulaic rationing, however, each episode has been carefully crafted to suit the pace of a larger narrative, Lee said. 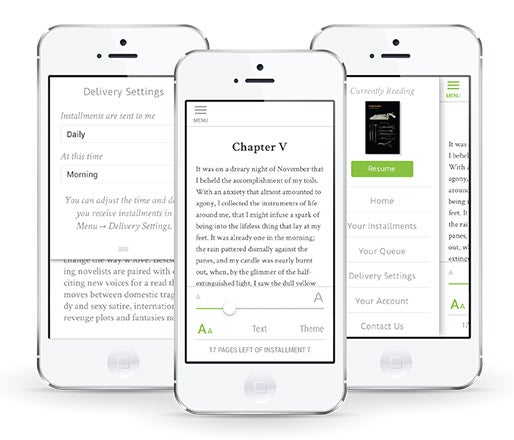 While Lee calls the novel an artifact of the printing generation, many existing e-reader apps merely mimic the age-old structure on modern devices. She calls Rooster "what the reading experience would look like if it were designed from scratch today."

A serialized approach is bound to impact the content of works as well, Lee said -- for the better. Whereas contemporary literary fiction has tended to be more quiet and contemplative, serialized delivery forces structure and action.

Related: Could Your Future Smartphone Help You Read Faster?

Rooster will commission authors to write with this in mind. Its authors must also aim to persistently engage readers who face a barrage of texts, emails and other onscreen notifications, she added.

One contemporary work and one classic selection will be curated each month by Rooster's lit-obsessed founders, including editorial director Yael Goldstein Love, who is a novelist herself.

The current pool of writers includes National Book Award and Pen/Hemingway Award winners, and Pulitzer Prize finalists. Launching this week, Rooster is priced at $4.99 per month and is thus far only available on iPhones.

Serialized fiction initially proliferated in Victorian England, and then quickly spread across the globe, where works including The Three Musketeers, Uncle Tom's Cabin, Madame Bovary, Anna Karenina and Sherlock Holmes all debuted in piecemeal installments.

At the time, books were considered a luxury item, so serialization in newspapers and magazines emerged as an inexpensive way to garner rabid readership.

Throughout the 1930s, the form began to wane with the rise of radio and TV. This was also around the same time that paperback books began to rock the publishing industry.

Yet Lee cited the binge-worthy House of Cards -- dispensed in its own groundbreaking format -- as evidence that consumers may be hungering for a similarly addictive delivery structure for books.

"To us city kids, a Rooster was a symbol of healthful, invigorating daily rhythms," said Goldstein Love. And if Rooster can indeed bring the same devoted masses to the world of literature on a habitual basis, it would certainly be something to crow about.

Related: Report: Amazon Developing Way for Stores to Use Kindle at Checkout

Need To Cut Costs? Start With These 10 Money Saving Ideas