By Colleen DeBaise
September 16, 2011
Opinions expressed by Entrepreneur contributors are their own. 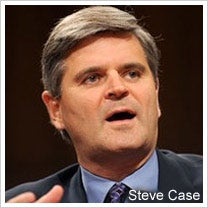 It's not every day that a group of big-name entrepreneurs come together to share their thoughts on what can be done to foster business ownership in the U.S.

On Thursday, Steve Case, Martha Stewart and Zappos' Tony Hsieh were among the eclectic mix of speakers at the Economist's "Human Potential" conference in New York, which covered not just small business but a wide range of work-related issues. (Other speakers included two former gang leaders, one ex-mobster and songwriter Roseanne Cash, who toted a guitar and sang a new tune.)

Case, co-founder of AOL and chairman of the Startup America Partnership, a public-private initiative launched at the White House, took the lead fielding questions about entrepreneurship -- particularly how to jumpstart it in a flailing economy.

The key, he said, is for the government and the private sector to identify high-growth companies, and make it easier for them to access financing and go public, which happens to be a goal of Startup America. "Most of the job creation [happens] after they go public," Case said. He supports capital-gains relief for investors and easing restrictions on crowdfunding sites, which allow start-ups to raise funds from large pools of investors.

"High growth" doesn't just mean venture-funded tech companies in Silicon Valley, Case stressed. (Critics have said Startup America, which partners with the Case Foundation, the Kauffman Foundation and a number of government agencies, focuses too much attention on high-flying firms and not enough on mom-and-pop operations.) Many of the country's high-growth firms, according to Case, count on Small Business Administration-backed loans for financing, and come from industries as diverse as manufacturing and fashion.

Lawmakers from both parties would need to agree on proposals, including hot-button ones on immigration, for there to be progress, Case said. "If there's one place we should be able to build bipartisan support, it should be around entrepreneurship," he said.

Other speakers fashioned their remarks around what it's like to be an entrepreneur in today's competitive environment. Domestic doyenne Stewart talked about her famous perfectionism and workaholic tendencies -- neither of which, it seems, have eased up since her recent 70th birthday. "I'm working -- I'm on -- all the time," she said.

Tony Hsieh, chief executive of Zappos, told the audience that the key to running a successful, creative business is pinpointing core values around which a company can build its brand and workplace culture. (Zappos has 10, including "Do More With Less" and "Be Humble.") "Other companies out there should figure out what their values -- and commit to them," he said