What makes these leaders stand out from the rest? IBM's Watson did some digging.

By Rose Leadem
June 7, 2017
Opinions expressed by Entrepreneur contributors are their own.

From Bill Gates to Meg Whitman to Elon Musk, today's most renowned business people innovate, inspire and create. However, what makes these individuals so different from the rest of us? What traits do they possess that make them so successful?

With the help of IBM's supercomputer Watson, online career management website Paysa sought to uncover the common characteristics of top business leaders. Using Watson's Personality Insights program to analyze speeches, essays, books and interview transcripts of today's most powerful leaders, the company discovered what puts these people at the top.

Of eight surveyed industries, entertainment, fashion, finance, law, marketing, media, medicine and politics, Watson discovered that "intellect" was the top personality trait for leaders in a majority of these fields.

Watson also rated the amount of certain characteristics it identified in leaders across the various industries. It found that 90 percent or more of leaders in entertainment, fashion, law, media, medicine and politics carried the "intellect" trait. Out of all analyzed industries, leaders in fashion scored the highest percentage of intellect at 98 percent. To the contrary, leaders in finance had the lowest intellect score at 83 percent among the analyzed fields. On top of intellect, altruism was the second most common leadership trait for most industries. Other top traits varied from industry to industry but included imagination, cautiousness, assertiveness, authority-challenging, adventurousness and more.

So who exactly are these imaginative and altruistic leaders? Watson found the answer. Diving deeper, the supercomputer analyzed the personality traits of today's top tech leaders and uncovered who falls where in terms of most imaginative, assertive, achievement-striving, altruistic, cautious and uncompromising leaders in tech.

Related: Here Are 5 Characteristics of Grit. How Many Do You Have?

Tim Cook takes the cake for the most imaginative tech leader, beating Jeff Bezos, Larry Ellison and even Elon Musk. In fact, and to much surprise, Musk received the highest score for the "most cautious leader," according to Watson. (Maybe the supercomputer doesn't know about his plans for life on Mars or his Boring Company's underground traffic tunnel.) 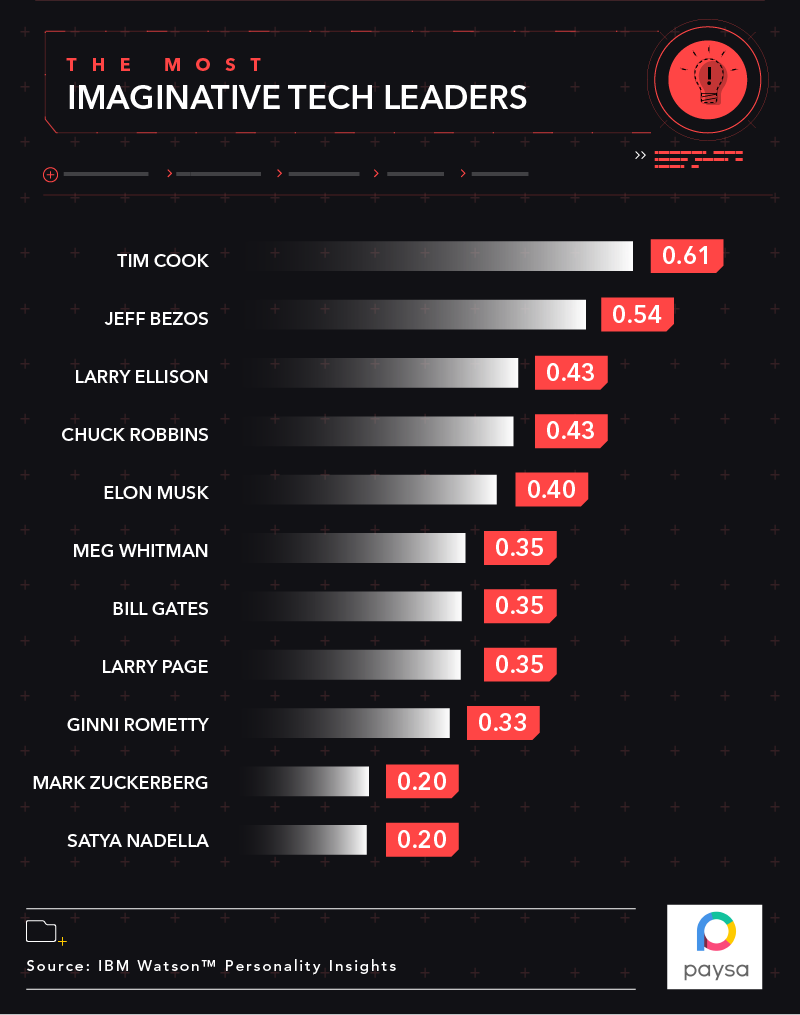 Tech leaders are often recognized for using their resources to improve the world and enhance the wellbeing of others. That's why it's no surprise that altruism was the highest scored trait among the techies. Above all, Bezos, Cook and Meg Whitman each tied for "most altruistic leader" at 98 percent. Whitman also topped the list for the most "achievement-seeking leader." Before Hewlett Packard, Whitman held executive roles at Hasbro, Disney and eBay and in 2008, she made The New York Times's list of women most likely to become the first female president of the U.S.

Of all top tech leaders, Mark Zuckerberg seemed to exhibit the least amount of top common success traits identified by Watson. Although that doesn't mean much -- the Facebook co-founder and CEO just has his own set of unique traits that make him stand out. Rather than being assertive or cautious, one of the youngest, richest leaders of Silicon Valley was identified as having intellect, emotionality, immoderation, melancholy and gregariousness as his top five traits. 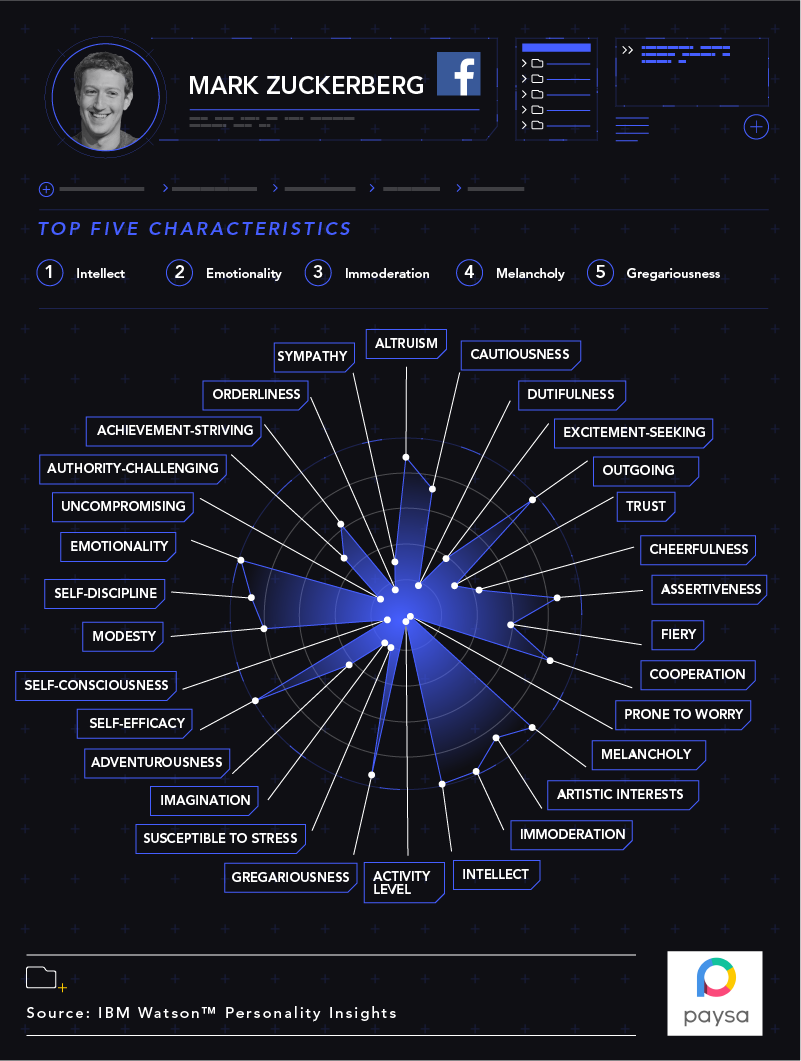