How Randy Pausch's life lessons can help you connect with employees and become a better entrepreneur.

Carnegie Mellon professor Randy Pausch said his last lecture, "Really Achieving Your Childhood Dreams," was actually meant for a very small audience: his three children. But hundreds attended the lecture given last September, and millions have viewed the video online. It has since launched a bestselling book, The Last Lecture.

Pausch died July 25 after a hard-fought battle with pancreatic cancer. Before he died, he admitted to being somewhat embarrassed by all the attention but pleased that his words have been able to help so many. Even if your dreams as an 8-year-old didn't include being your own boss, Pausch's lessons offer some entrepreneurial insight:

1. When you hit a brick wall, consider another perspective.
As an entrepreneur, you're up against seemingly insurmountable obstacles all the time. 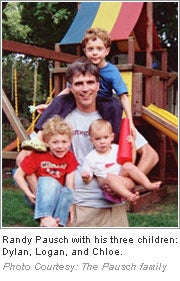 "Brick walls are there for a reason," Pausch says. "[They] give us a chance to show how badly we want something."

Aaron Boyce, small-business consultant and author of Seize the Opportunity and Other Marketing Strategies, couldn't agree more. He subscribes to what he calls the 80/20 rule. When people face a brick wall, 80 percent of them will try to force their way through it, eventually giving up. It's only 20 percent who will step back to consider it from a different perspective.

"Often, when we step away from something, that's where we find solutions," Boyce says.

2. Magnify the yeses in every situation.
Joni Carley, founder of Wisdom at Work, an international coaching and consulting firm, points out that when Pausch confronted a brick wall, he chose to magnify the yeses instead of worrying about the nos. This kept him focused on the next steps that would open doors for him. As an entrepreneur, exploring the positives of every situation will keep your business growing.

3. You can't get there alone.
Carley also notes that Pausch often used his relationships to get over walls. Go to conferences, network with other entrepreneurs, get involved in local events and make connections. Boyce suggests also finding a mentor. Establishing and maintaining meaningful relationships will help you achieve your goals and provide a support group when times are tough.

4. Loyalty is a two-way street.
Remember, what goes around, comes around. According to Pausch, it's important to give as much as you get. Even if you don't ask for anything in return, you'll find that the people you help will probably be willing to help you.

Additionally, Carley says that it's important to support your employees in their endeavors, even if one day they could become your competition--or perhaps your next partner.

"One plus one in business doesn't equal two--it equals 10," she says.

5. Always be open to feedback.
Becoming self-reflective, and teaching your employees to be self-reflective, will take your business to new heights. Opening the floor to peer reviews also creates room for growth and improvement. At The Phelps Group, a Santa Monica, California-based marketing communications company, the business relies on feedback instead of upper-management approval processes.

The company, which expects sales of more than $60 million this year, uses 360 Reviews, where employees are reviewed by several of the people they work with most closely.

Founder Joe Phelps, 58, uses the same system for himself. On Zoomerang, an online survey site, Phelps invites everyone at the agency to give him feedback year-round.

6. Keep challenging your team.
Your team should care about your company's goals as much as you do. It's all about instilling a sense of ownership in each employee, says consultant Boyce, who recommends using a profit-sharing or bonus program.

Lead by example: If your enthusiasm doesn't fail and you're continually challenging yourself, your employees will follow suit.

"What [people] are motivated by is finding out in their heart what they really want to do," Phelps says.

Communicate with your team and help them discover what it is they want to achieve.

7. Lead your life the right way.
At the end of his lecture, Pausch says:

At Phelps' company, the employees decided as a group to only take accounts that will make the world a better place. Phelps says more and more people have come to work at The Phelps Group because they identify with its positive message. He points to working for clients such as City of Hope, a cancer treatment and research center, as an inspiration to his employees.

"They care more, they do better work, and it's like an upward spiral; it just keeps paying off," he says.