How a jewelry designer poured her passion into reviving devastated communities with new entrepreneurial projects.

On April 25, 2015, a devastating, 7.8-magnitude earthquake struck the central region of Nepal along the foothills of the Himalayas. Nearly 9,000 people were killed and approximately 22,000 injured. Over 700,000 homes were damaged. Three-and-a-half million were left homeless.

Related: This Billionaire Company was Made in Nepal

And the destruction seemed to go on and on: A series of aftershocks almost as severe as the initial earthquake continued to literally shake this impoverished nation to its core.

Seven thousand miles away, in Brooklyn, N.Y., entrepreneur Natasha Wozniak felt that shaking, too, at her emotional core ."I wanted to do something," Wozniak, a jewelry designer, said recently recalling how the humanitarian crisis in Nepal affected her personally: "I had deep ties with the people there."

Those ties dated back to Wozniak's student days in 1995 when she spent a year in Kathmandu Valley studying Nepali sculpture, then returned to those studies for another year, in 1999, as a Fulbright scholar.

She spoke the Nepali language. She knew the culture. She loved the gentle, generous people of Nepal. She even incorporated the local Gurung culture into her jewelry designs.

That's why, following the news of the earthquake, Wozniak acted fast: Within ten days she'd raised $6,000 from friends and family and begun the philanthropic mission she's continued, a mission which has: raised $250,000; rebuilt the Nepali village of Rainaskot; contributed to the economy of a second village, Barbandi; and founded the 501(c) (3) Sangsangai (meaning "together"). In late September Rainaskot was even honored with the Nepali government's "Tourism Destination of the Year" designation.

In 2017, just two years after the earthquake, Wozniak's organization was able to hand over a community center and 14 rebuilt homes to Rainaskot's villagers; and Sangsangai still remains active in the region today. For example, a guest room was added to each home, so the villagers could augment their subsistence farming income with tourism, an effort that's already drawn 3,000 visitors, according to villagers' guest ledgers.

Those visitors come both from abroad and from Nepal's cities like Pokhara and Besi Sahar, to gaze at Rainaskot's soaring views of the Himalayas and to enjoy their local host families' Nepali traditions of warm hospitality, and local delicacies like Sel roti. 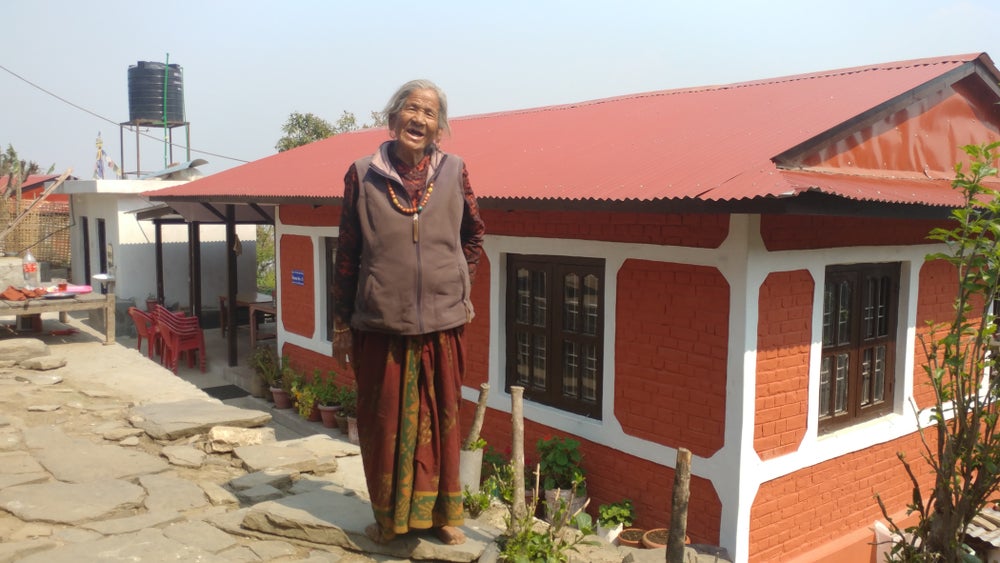 The road to rebuilding a Nepali village

But getting Rainaskot to this point has been a long, difficult road. "I started holding fund-raisers, the first at a friend's apartment," Wozniak says of her rough start. "And, I'm saying, "Okay, I've never done this before! But I'm going to rebuild this village!'"

Yet that's exactly what she did. She raised that first $6,000, then kept on fund-raising, in New York and in her hometown of Racine, Wis. She set up a crowdfunding page on the web. She built on-the-ground support by renewing an old friendship from her Nepal days: with Bibek Pandit, whom she'd first met while staying with his family in 1995. She had been 19 at the time; he was 4.

Today, both are grown up. Wozniak is 43. Pandit, who's in his 20s, heads up Sangsangai's NGO in Nepal. Back in the U.S., Nepali-born businessman Sharda Thapa has lent crucial support, starting with the $31,000 he raised from a Nepali group in Jacksonville, Fla. Another Nepali ally, who heads an NGO there, suggested the tourism idea. Many volunteers in both Nepal and this country have also pitched in.

That doesn't mean that the early years weren't crazy-stressful, as Wozniak continued to run her jewelry business and her non-profit simultaneously: "I would fill all my orders, get on a plane to Nepal, spend a month there and come back, restart the business," she says. Still, she and Pandit managed to hire Nepal architects and construction crews to build back the Rainaskot villagers' traditional red ochre stone and mud mortar houses -- making them earthquake-proof this time with bricks and cement, and adding porches for family gatherings.

It was important to the two philanthropists to do all this with the villagers' full participation, Wozniak explains. "The architects and engineers would bring the plans, but the villagers had to make the final decisions." Regular planning meetings were held, and the local families, comprising about 60 residents, each sent a representative.

The challenges were substantial: Life after the earthquake was hard; the villagers were forced to sleep under plastic sheeting draped over a bamboo greenhouse. There was also, of course, the financial struggle. And infrastructure repairs were tough: The tiny, muddy road up to Rainaskot, at an elevation of 5,700 feet, had to be widened and improved so trailers could haul in bricks and other building materials. Tensions simmered, meanwhile, between Rainaskot's residents and its jealous neighbors, living in the village just below.

There was more: Building permits from Nepal's newly stabilized government were exceedingly hard to obtain. The border with neighboring India closed down for six months starting in 2015, due to a political conflict with Nepal; fuel couldn't get through.

In addition, there was a drought. And because the earthquake had shifted Rainaskot's natural water source, the villagers had to negotiate water rights with neighboring communities. Those communities and construction accidents repeatedly cut Rainaskot's water line, which in turn ground cement-mixing to a halt.

Still, the deep collaboration Wozniak and Pandit had fostered with the villagers paid off: Their project moved ahead while others failed. Yet because of the difficult permit process, the two partners decided to forgo building houses in Barbandi, the second village they approached. Those residents, after all, could rebuild, themselves, using grants newly released from the government.

That's why Wozniak and Pandit decided to build a community center, not houses, in Barbandi. "We'll use it as an engine for giving training, and employment training," Wozniak says they decided.

"We're in a mission shift," Wozniak acknowledges of Sangsangai's new direction. "We started out as 'the organization building villages and private homes.' Now, we're considering ways [in which to take] the economic development model in a way [where] we don't have to build a whole village, to use resources to create more impact with less investment."

Accordingly, Sangsangai is finalizing an agreement with a Nepali felt-making company called Everest Fashions to begin raising funds next year to build a workshop. At least 50 people will be employed, helping to supply felt to the West Elm American home decor company.

Back in Rainaskot, something else is newly flourishing ... chickens: Tourists come from the city for the weekend to not only enjoy the mountain views and the local cuisine -- but also to take home a local free-range chicken for later consumption, paying host families $15 to $25 for the privilege. 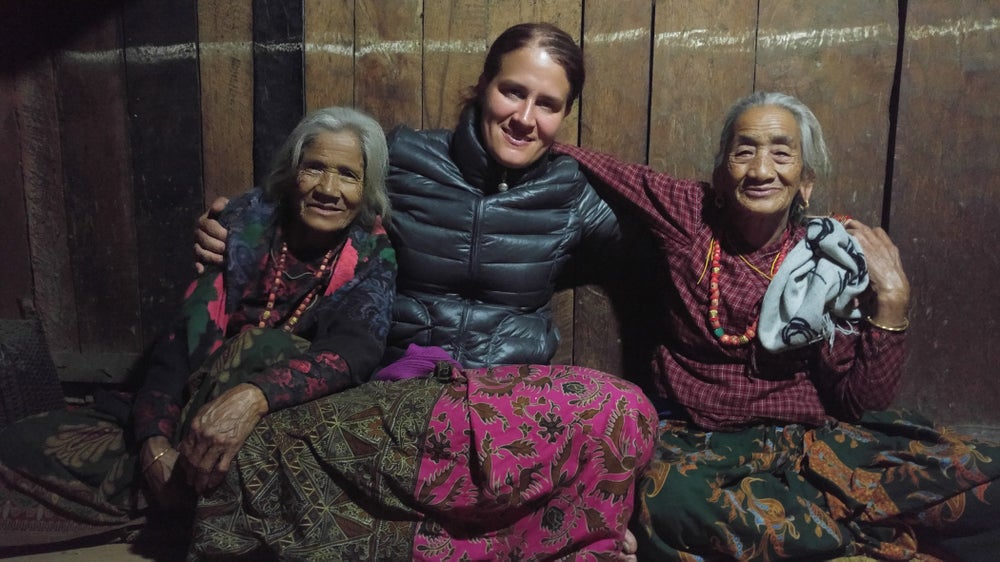 What's ahead, Wozniak says, are plans to create digital products to help the people of Nepal with trade and education. She's also working to loosen the ties that bind her to the villagers she already knows, whose culture emphasizes long-term relationships. Her goal, though, is to foster self-reliance.

What's behind for Wozniak, meanwhile, are the experiences she's had in Nepal that have taught this entrepreneur some important lessons even as she has worked to foment entrepreneurial change:

Have team members on the ground. "Sometimes I felt a little bit uncomfortable being in my position, being the 'face' of the organization," Wozniak says. That's why having team members on the ground and assuring villagers they had the right to override all decisions made a difference. Specifically, this strategy headed off two bad results: 1) villagers relying on her too much; 2) unscrupulous locals trying to exploit monied foreign aid organizations.

Ensure that the people you're helping are investing their own resources. This strategy helps maintain locals' commitment. "No matter what the scale, you have to find some way for the beneficiary to have some skin in the game," Wozniak says. Given the villagers' frustrations and temptation to leave during the long rebuilding process, "If they hadn't committed their own resources, maybe they would have said, 'Forget it.'"

Related: India and Nepal to Join Hands to Promote Entrepreneurship

Set up peer-to-peer networks. "This is a story that has yet to unfold, but I think the villagers of Rainaskot are going to be called upon by other villagers and other people in Nepal," Wozniak says. "Once they're running their business and are successful, I'd really like to make it peer to peer.

"If I show up in the village, people will say 'You can do it because you're educated and you have resources.' But if one of my villagers from Rainsakot goes and says, 'Oh, we did that and we were able to do that,' that has power."