What Blake Lively Has Learned From Her Critics: 'You Can't Be an Entrepreneur for Other People.'

The founder of lifestyle site Preserve explains why she isn't letting detractors drag her down.

Critics sharpened their claws when actress Blake Lively launched a lifestyle site this July. Reviewers and bloggers got cheeky with Preserve for its "hipster" tone, comparing it to Gwyneth Paltrow's Goop, which itself has been bashed for selling products and tips that were considered "out of touch with reality."

The final blow came from lifestyle media empress Martha Stewart, who in an interview with The Huffington Post delivered less than encouraging comments on Lively's new venture.

But the former star of Gossip Girl isn't letting detractors drag her down.

She continues to call her new venture -- which fuses fashion and literary blogs, artisan e-commerce and social-good elements into one dark and quirky platform -- her "baby." We chatted with the chipper actress who sounded confident about moving Preserve past its critics, her "aha" moment for founding the site, which celebrity she really considers a mentor -- and her overall career pivot from Gossip Girl to entrepreneur.

Entrepreneur: How's your schedule as an entrepreneur and how closely are you involved in the day-to-day operations of Preserve?
Blake Lively: Oh boy, it's more demanding than I expected! But I'm part of every aspect. I'm the creative director but I'm the CEO all the way down to production assistant.

I'm finding the writers, proofreading their work and figuring out how to reach them which is tough, because as a startup, we don't have the budget to meet their pay rates. It's incredibly important to understand each role. This is my company. It's my baby. 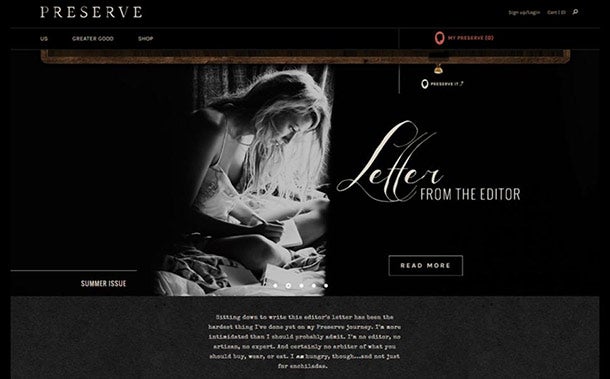 Q: Why did you launch Preserve?
A: I always appreciated the magnitude of my mother's imagination. She always saw beauty in what was broken and she'd preserve it. So because of her I always had passion for creating art out of a meal or a home environment. Martha Stewart did this but my mother was a little scrappier and fashion was a big part of her life; she would make our clothing and create something out of nothing.

I knew that was a world I wanted to be in but I couldn't find a job description that would fit. I thought about party planning, interior design or fashion but it was all too specific -- it all sounded too limiting. I fell into acting and once I saw that people were listening, I realized I can now create my own path. I knew that as soon as Gossip Girl was over I wanted to start this company. It's been live for a few months but we've been growing it for more than two years and we're still adapting.

Related: NFL Star Founds Fashion Brand for a Cause With Former TOMS Exec

Q: Are you using entrepreneurialism to rebrand yourself as a lifestyle expert?
A: No! Because this is me and anyone who knows me knows this is a better representation of me. I'm a very shy person but live a public life by the profession I've chosen. I'm aware it gives me an unfair advantage. I think I'm very much an entrepreneur but I know I have the ability to start a company in a lot of ways than other people who are more qualified because I have this existing brand as an actress.

But what's interesting is that I could have taken a different entrepreneurial road. I was on a television show for years and it had a very specific audience. I could've built on what Gossip Girl [a former CW television show about privileged, young Manhattanites] was and I had a lot of opportunities to but it didn't reflect my true personality or brand.

Preserve is a lot more different than the Gossip Girl brand. It's a lot more Southern, moodier, masculine, and rustic – it's a lot of things that the polished Upper East Side aren't. I know a lot of my audience won't connect and that's definitely a risk but it's just that the Gossip Girl taste was so strong and it was reflected and projected onto me.

Q: Are your critics discouraging you? How do you keep your morale high despite any cynical feedback?
A: Well, you can learn a lot from criticism if you can take what's constructive out of it. If you read a review that starts with "This person is an idiot, who do they think they are?' You're not going to learn anything from that. But there's customer service feedback with good advice on how to make the site easier to navigate. Anything that has to do with the site experience and the design we listen to and assess the value behind them.

Many entrepreneurial friends who run very, very successful businesses have told me they've learned the most from critics. And that's nice to hear because the critics, well, they can be scary. But I know the disparaging critics are the media and the most kind are the consumers. And they're the ones who make your brand. That's what we've found. For instance, comedian David Cross wrote something satire-heavy about flower beards, and bloggers and writers jumped at it. But they missed the fact that this was just a humorous piece, and not to be taken too seriously.

Related: Terrell Owens on How to Overcome Pitfalls, Distractors and Naysayers

Q: You mentioned successful entrepreneurial friends helped you overcome negative reviews. Who guided you most through this Internet startup journey and how?
A: Well I don't want to out anyone, but my dear friend Ivanka Trump has an incredible network of loyal friends who are kind, generous and brilliant entrepreneurs. She inspires me and introduced me to a lot of her friends who run major companies. What's amazing is these people run hundreds of millions of dollars in businesses, and give up valuable time to give me advice and pay it forward. That's a rare community that you get that. I was never on the phone with the most successful actresses in the world discussing movie roles or performances. In Hollywood that's just not something you trade in. The entrepreneurial world is one that's welcoming.

Q: What's surprised you most about becoming an entrepreneur?
A: The biggest difference for me is I can control my own destiny versus being an employee in the movie industry. It's creatively more satisfying to be part of something from beginning to end. It feels good to own the work you're proud of; even if it's not the best, at least you know that was on you and you can take accountability.

Every entrepreneur I speak with agrees that the common thread among the most successful startups is the person behind it, who believed in it and championed it against all odds. This has nothing to do with how the outside world views you because that is a contrived thing that could crumble. You have to believe in it and yourself. That's the only way it will survive. 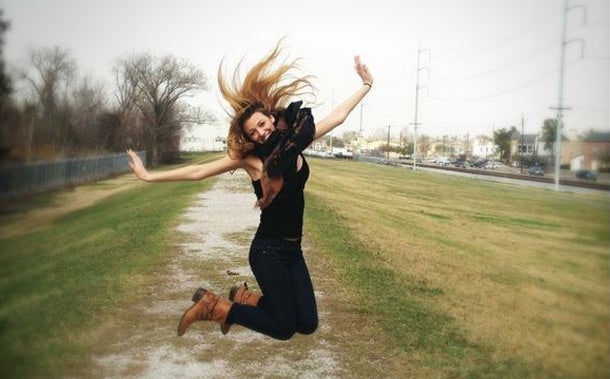