By Laura Entis
July 30, 2015
Opinions expressed by Entrepreneur contributors are their own.

When it comes to our national diet and fitness habits, the forecast is typically bleak: More than two-thirds of the adult population is overweight and more than one third is considered obese, which puts the majority of Americans at increased risk for diabetes and heart disease.

But in the past week, two promising rays have pierced through the gloom. Finally, Americans are consuming fewer calories. They also appear to be exercising more.

As The New York Times recently reported, the average daily number of calories consumed per U.S. adult peaked around 2003, but now seems to be experiencing its first subtle but sustained decline in 40 years. Meanwhile, the average child's daily calorie consumption has fallen even more sharply, with a reduction of about 9 percent, according to the Times.

In addition to this promising trend comes more good news. A new Gallup survey suggests thta Americans are moving more. In June, the highest percentage of Americans reported that they exercise frequently (defined as at least 30 minutes of activity three or more days a week) than in any other month since the company first started recording exercise data in 2008.

The percentage increases have been small, to be fair. Last month, 55.5 percent of respondents indicated that they exercise frequently, up from last summer's high of 54.9 percent, and 2013's summer high of 54.2 percent. Exercising rates consistently drop in winter months but "if the current trend continues, 2015 may be one of the best years for exercise rates in the U.S.," according to the report.

Related: Why Investors Are Banking on This App to Curb Childhood Obesity 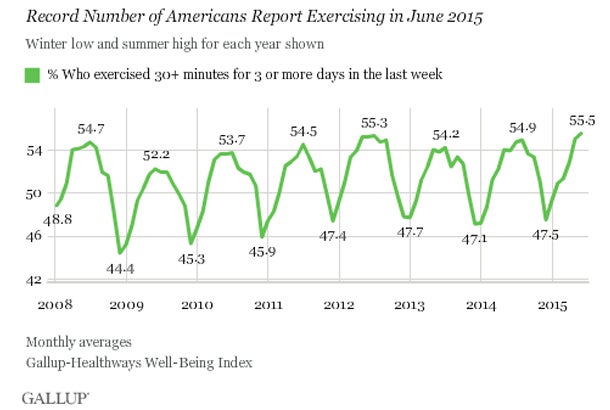 It's a small change, yes, but as the report also notes, even moderate improvements in exercise habits can have positive effects on both physical and physiological health.

America is not off the hook. Despite a slight reduction in our daily calorie consumption, our national diet remains deeply flawed. We're not eating nearly enough fruits and vegetables, we're still eating too much junk food and our salt intake is too high. Despite the sizable cut in the average child's calorie consumption (good news, especially when paired with declining obesity rates in young children), it appears that while kids are eating less, their diets aren't necessarily getting healthier.

Calorie reductions need to fall further. And as a nation, we should be moving more (the CDC recommends adults get at least 2 hours and 30 minutes of moderate-intensity aerobic activity plus perform muscle strengthening exercises two or more days a week.) In other words, to truly reverse the obesity epidemic, both trends need a lot more steam.

But they are a start, and a promising early indication that as a country, we are starting to follow the simple (but effective) weight-loss adage: Eat less. Exercise more.

Related: For the First Time, Promising News on the Obesity Front