How Boutique Hotels Are Courting Googlers and Gamers

Put down your iPad. It's the ping pong paddle you'll need at boutique hotels targeting a new type of business traveler.

Once upon the "70s and "80s, pinball wizards and Pac-Man mavens could count on camping out in the hotel arcade for kicks. Now in a retro revival, hotel game rooms are back at a crop of design-forward hotels across the U.S., this time with adults in mind.

The new Hotel Zetta in San Francisco stocks its loft-like mezzanine overlooking the lobby with a pool table, tabletop shuffleboard and board games such as Yahtzee and Candyland. Players launch soccer balls across the blown-up, two-story Pachinko board, wending their way down to scoring buckets in the lobby below. Pod 39 in New York recently added a Play Room equipped with ping pong tables and classic board games like Parcheesi. The Hotel Monaco in San Francisco breaks out Wii video games during its complimentary wine hour each evening. And the new Wildwood Lodge at Snowmass near Aspen, Colorado, reprises the classic arcade game room with retro features like Galaga and foosball as well as more recent video games such as The Fast and The Furious racing game. 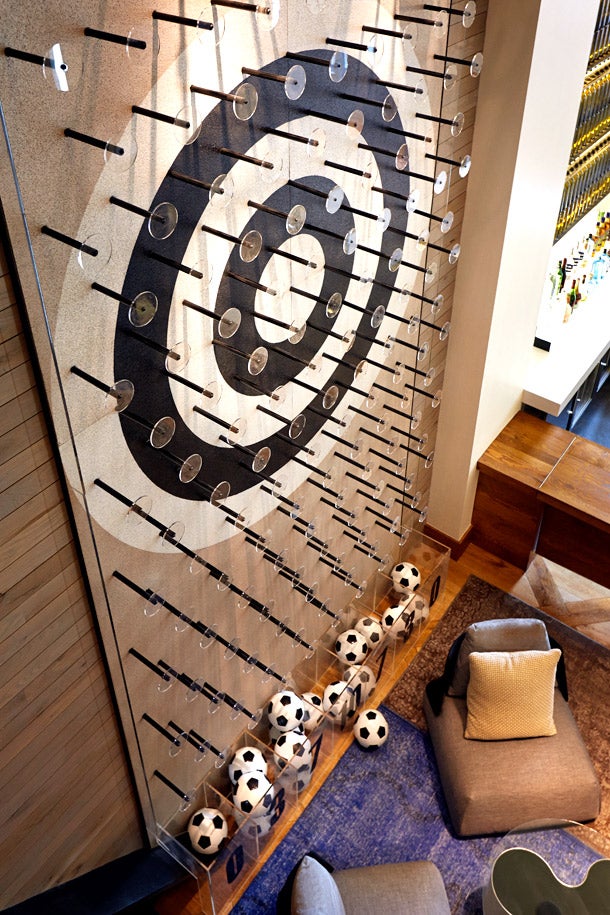 As workplaces have shifted to engender communal creativity, so too are hotels, offering diverting ice-breakers with the aim of cultivating a following among business travelers in creative fields ranging from media to technology. Analysts decline to put a number on the growth of game rooms at hotels – they seem to be limited to smaller, boutique properties in major cities or destinations favored by start-ups – though they trace the impetus of the trend to the 2008 introduction of Aloft Hotels, which added fun features such as lobby pool tables, tabletop shuffle boards and backgammon to classic limited-service hotels aimed at business travelers.

"Hotels are moving away from just providing food and shelter for the night to becoming social hubs," says Jan Freitag, senior vice president at hotel industry analyst STR Global. "The lobby used to be a wasted space of marble hallways and maybe not even furniture. It wasn't a place you wanted to stay. They are now being designed as places you want to be and as a result are becoming revenue centers for food and beverage." 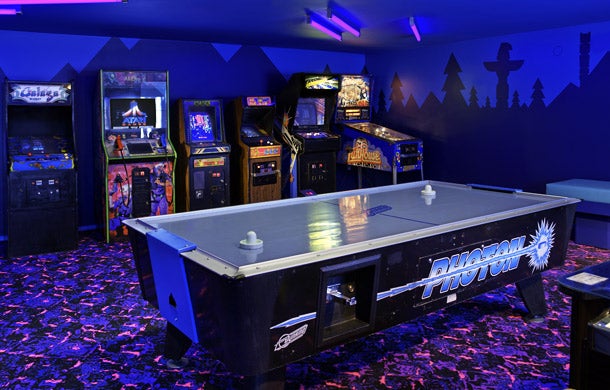 Diversions like games specifically keep guests entertained on property, which is a bonus for solo business travelers who might otherwise stay shut-in channel-surfing. "When we were designing the space, we wanted to figure out ways for people to go back there for new experiences in the same space," says Carlton DeWoody of the New York firm Reunion, designer of the Wildwood Lodge, listing coffee breaks, work time, social hour, meals and other uses supported in a lounge filled with trivia and board games. "Within one space, there are five different things to do depending on the time of day." In tailoring new experiences to a traveler's needs, many hotels are taking their cues from the broader gaming culture. In the case of San Francisco's Hotel Zetta, management targeted business travelers in the high-tech and media worlds.

"The game room is a new definition of luxury for a certain kind of creative professional," says Seattle-based interior designer Andrea Dawson, who designed the Hotel Zetta. Having worked on prior projects aimed at the Microsoft workforce, she learned the needs of the tech community and channeled them into communal spaces that afford stimulating social and down time. "They work long hard hours. But then they love to play. They're gamers. They have a different energy they need to release as part of their creative process."

Game rooms are also another way hotels aim to engender community among strangers. Hotelier Richard Born insists the "playroom" he developed at Pod 39 in New York is an amenity aimed at developing the hotel's social side, though it resides next to the bar. "It's successful as an operation as the bar is busy, but it's also successful as a great amenity hotel guests like," he says. "That's why we made it a playroom rather than a restaurant. We want to devote more space to relaxation."

Pod 39's 366 rooms are intentionally small, and priced accordingly; ergo, the play space provides living room for guests to gather. "The business traveler we get is not the corporate executive from Xerox, it's the entrepreneur paying his way," says Born who plans to add a playroom to his original Pod 51 hotel nearby this year. "We give someone with more creativity and expanded thinking a place to meet others who found the hotel for the same reason." Over a game of ping pong, presumably.