Create an inspiring and functional office when space is limited.

By Jennifer Grzeskowiak
April 7, 2008
Opinions expressed by Entrepreneur contributors are their own.

For nine years, Leon Rodriguez helped create exhibitions for the 58,000-square-foot J. Paul Getty Museum. When he started his own design consultancy at the beginning of 2008, he tackled a new assignment: turning a closet in his Los Angeles condo into an office.

Using stacked organizational bins, a Rakks shelving system and a space-saving iMac, Rodriguez created a work area that he says is meeting his needs. "Working with what you have and making the most of it is a good goal," he adds.

Whether you're running your business from a home office or another limited space, your work environment can affect your productivity. The U.S. Workplace Survey by international design, planning and consulting firm Gensler found that in 2006, 21 percent of employees surveyed believed they could increase productivity if they had a better-designed work area. Only 50 percent said their workplace design "encourages innovation and creativity."

A Reflection of Your Brand

Celebrity home designer Mark Brunetz, who has beautified nearly 100 home offices on Style Channel's Clean House, says the first step is to determine how you want to feel in the space and what you want it to say about your company. While most people focus only on practicality, Brunetz recommends creating a space that looks more like a living area than an office.

For instance, try decorating with colors like blue and green and hints of red and orange instead of white and beige, which can lack energy. When shopping for furniture and accessories, try Ikea and similar stores rather than office supply chains. And use wall art, area rugs and pillows to inject color and personality without taking up valuable desk and floor space.

"If you have a creative business, what better way to showcase your creativity than with your office?" asks Alexandra Watkins, owner of Eat My Words, a naming firm in San Francisco. Watkins' 900-square-foot work space is so creative, in fact, that when clients from Del Monte walked into the space, they said they had to work with her. Among other things, the clients saw a diner-style booth functioning as a desk and conference room table, a pink refrigerator used as a bookcase, and a sizable collection of hot sauce bottles and floaty pens.

While the office provides plenty of visual interest that reflects Watkins' personality, it's also highly functional. The booth seats lift up for storage, and a custom credenza houses a printer, laptop, books, office supplies and paper. Watkins also had a less-than-3-foot-high closet turned into a storage cabinet with horizontal flat files. And she stores organizational bins wherever possible, including under a couch and behind curtain panels. 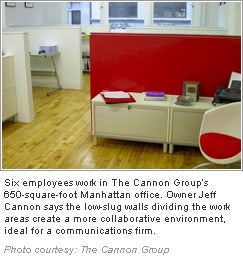 When Jeff Cannon began laying out the 650-square-foot office space for his communications company, The Cannon Group, in Manhattan's Flatiron District, he also used "ideas from residential living rather than corporate boardrooms."

His goal was to create an environment that encouraged collaboration among the six employees that would be working there. To achieve that goal and to make the space feel larger, he chose work stations with low-slung walls. And instead of a conference room, he set up chairs around a coffee table.

"The more people talk and throw around ideas, the better," he says. "It's a collaborative, open design."

Despite a small office, Cannon projected the image of a large communications firm using technology. He now uses a VOiP system, networked printers and an extra storage computer.

Get It Together, People

Making the most of your space requires good planning. Once you know the feel and function of your office, Brunetz recommends sketching out the area. (Cannon used PowerPoint to design his office.) Then, before purchasing a piece of furniture, tape its dimensions on the floor to make sure it will fit.

When laying out your space, think vertically as well as horizontally. Brunetz recommends shelving systems--like Elfa from The Container Store--to maximize wall space. You can even attach your desk top to the wall using these systems, leaving room underneath for a printer and a trash can. Rodriguez says not having legs under his desk has made his closet-turned-office more functional.

Being organized is also key to making a small space work. "When you can't find a file or presentation for a client, you feel inept," says Dana Korey, owner of San Diego-based Away With Clutter. "But when you know where things are, you feel calm and in control." She recommends the following steps for establishing an organizational system:

1. Sort everything into categories, such as paper, computer equipment, DVDs, office supplies and books.
2. Decide what to keep, shred or donate.
3. Find the best way to contain the items. For instance, use interlocking containers in drawers so that you don't waste time looking for pens or paper clips.
4. Create zones. Put the things you use most often closest to you and store things that you don't use as frequently farther away from your main station. "Don't let an outlet dominate," Korey says. Bring in an electrician if you need an outlet closer to you.
5. Maintain the space. Your office should be set up so that it only takes five minutes a day to clean up. If everything has a designated folder, drawer or container, it will be easier to put away.

Having a smaller office might require a bit more creativity, but Cannon says sacrificing space for his Manhattan location is "1,000 percent worth it. If you get claustrophobic, you go walk around outside where there are great restaurants, transportation and shops."

Rodriguez has found another benefit: "It makes you not be wasteful. You think about what you really need."