5 Things Jimmy Buffett Does Better Than Just About Everybody 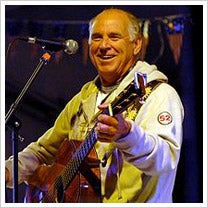 I am a Jimmy Buffett fan. OK, it might be a little more than that. I have a Margaritaville tattoo. For real. It was my first one. You're darn right it hurt. In fact, I told the needle-wielding tattoo artist, "Um, we can probably stop at Margarita." He said, "Too late. I've already got the v done." He may have been lying. But I couldn't chance walking around with Margaritav tattooed on my chest for the rest of my life. I got the tattoo.

I also have the CDs. Lots of them. And I've been to the shows. Several. There's photographic evidence out there to prove it. Grass skirts, large parrot-shaped earrings and coconut bikinis. And that was just me. To be a Jimmy Buffett fan is to be a connoisseur of his music but also to be a member of the culture he created--the endless search for Margaritaville.

It's funny: Buffett likes to say he's never held a real job in his life, but dude's full of entrepreneurial spirit. He's worked. A person can't build a mega-million-dollar empire without working. To reach the level he's reached (or, in his estimation, reach the beaches he's reached), he's had to make plenty of good decisions along the way and partner up with just the right people and just the right time.

In thinking about Jimmy and his career, I've come to the conclusion he does 5 things better than just about everybody else.

No. 1. He surrounds himself with talented people. Buffett will admit he's not the best singer or guitar player in the world. Heck, he can't even lay claim to being the best of either in his own band. But that points to a strength: He knows his weaknesses. Buffett writes great songs, makes great business deals, makes superb marketing decisions, and sings and plays guitar OK. He put together his Coral Reefer Band 30 years ago, and he made sure everyone in the band had talent. Most of them have their own recording careers, either as solo artists or with other bands. One artist who's been with him many years, Mac McAnally, won the Musician of the Year Award at last year's CMA Awards. And that doesn't scare Buffett. He knows he's better off when his people are better off.

No. 2. He recognizes potential. He got his start as a musician, but as Buffett's following grew he saw potential behind every wave. Potential for a bigger share of T-shirt sales, beer sales, album sales, product sales and more. Out of this strength came another--the one that grew his empire.

No. 3. He rides every breaker. As Buffett spotted each potential boon, he followed up. When he saw how much profit there was in T-shirt sales, he started his own line of shirts. When he felt he could make more money from his record sales than the label was paying him, he started his own label (and then two more). When he saw how many tropical-themed hats, shirts, sunglasses, flip-flops, necklaces, etc., fans wore to his concerts (which are really more carnival-like than concert-like), he started his own catalog of Buffett-sanctioned stuff. Then came Margaritaville stores. Then restaurants. Then an online store. Now he has his own beer, Land Shark Lager (in partnership with Anheuser-Busch); tequila, Margaritaville Tequila; margarita mix; a blender, the Margaritaville Frozen Concoction Maker; and, coming soon, Margaritaville Casino Resorts. One in Atlantic City and one in his hometown, Biloxi, Miss. He's got more, but you get the idea.

No. 4. He knows (and remembers) on which end his glass is salted (the top). It's amusing to watch shows that count down the top one-hit wonders or the where-are-they-now-style shows and hear artists lament that their careers, such as they were, are defined by one song. ("We did so much other great stuff." Really?) Buffett, on the other hand, has never shied from the Margaritaville song, mantra, way of life. He has recorded almost 30 studio albums, a couple of soundtracks, a few greatest hits CDs and several live albums in addition to his one-and-only top-10 hit, but it all comes back to that song. He still plays Margaritaville at every show, and you can tell he knows one essential fact: "This four minutes launched my career and built my empire." Margaritaville Holdings is privately held, but Rolling Stone estimated that Buffett earned $44 million in 2006. If one song created all that (and it didn't, but let's go with it), then so be it. Another fact that may make you respect or hate the guy even more--your choice--is that I read somewhere years ago that he swears he wrote the song in 20 minutes.