Are You Ready to Pitch Your Product to Investors?

By Carol Tice
April 5, 2012
Opinions expressed by Entrepreneur contributors are their own. 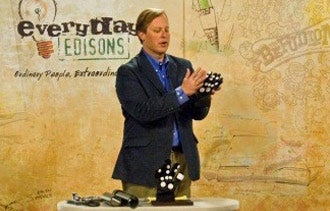 Every entrepreneur has his or her own take on what elements to have in place before talking about a new business. Some think more preparation is necessary than others, as seen in the debut episode of the fourth season of Everyday Edisons, a reality TV show on PBS (air times vary by market).

The episode featured original pitches sent in by video and some of the inventors chosen to present in person before the judges. In upcoming episodes, the judges will choose who to profile and work with for the rest of the season.

Seeing selections from the submissions and who made the cut, I didn't envy the judges their work. There are a lot of half-baked ideas rattling around America.

But what fascinated me was the rage of sophistication in the inventors' presentations.

Related: Entrepreneurs: Is Your Idea Ready for Prime Time?

The most impressive and advanced by far came from mechanical designer Mark Stark of St. Louis, Mo. He is the inventor of the Natural Dexterous Hand, an advanced prosthetic hand that doesn't require any robotics or electronics to operate. Stark brought a one-armed friend to demonstrate the dexterity of his prototype compared with his usual hook prosthetic. Stark's model enabled the friend to catch a small candy bar tossed tossed across the room.

The judges were wowed. The product seems like a slam dunk, even if the market size is fairly limited.

On the other end of the preparation spectrum was Maui resident Charlie Lumsden, who pitched a standup, stationary exercise machine that would mimic the action of a standup paddleboard. The idea was just that – an idea. He didn't have a single prototype built yet.

To me, it's a huge risk to present an idea at such an early stage. First off, anybody could create this machine, as it's a simple concept. If Lumsden is chosen, perhaps Everyday Edisons has already helped him build and patent the device, before we're seeing the episodes. But otherwise, the risk of ripoff seems high.

Also, Lumbsden comes off as sort of a dreamer. He essentially came with his pockets turned inside out, saying he didn't have a have a few thousand dollars to build a prototype of his product.

Investors like to see that an inventor has got "skin in the game" – that they are investing their own money in the business. I think most investors wonder why they should risk their money if an entrepreneur isn't passionate enough to spend a small sum to build the product and test it with consumers.

Thanks to the magic of television, we won't know who has been chosen or what the outcome will be until the upcoming episodes.

What elements do you think need to be in place to pitch? Leave a comment and give us your take.