By Diane Danielson
September 13, 2010
Opinions expressed by Entrepreneur contributors are their own. 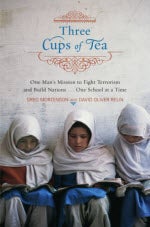 I wasn't planning on reviewing Three Cups of Tea: One Man's Mission to Promote Peace . . . One School at a Time by Greg Mortenson and David Oliver Relin here on Entrepreneur.com. But then school started, and I was reminded that we need a few Greg Mortensons to rebuild the U.S. education system. (More on that later).

What better guide for taking an entrepreneurial approach to a school system than to learn from a guy who decided to single-handedly build schools halfway around the world in remote terrain, within a corrupt political system, and for a culture that did not care to educate half of its population (girls). While that sounds like a next-to-impossible task, it may actually be harder to fix an existing educational system than to start one from scratch.

This is why there are lessons to be learned from Mortenson's adventures in Pakistan.

1. Thank goodness for youth and inexperience. I say this for two reasons. Someone older than Mortenson might have realized how nearly impossible a task he had taken on and given up on the spot. Sometimes it's better to be naÃƒÂ¯ve and ignorant of the challenges that may lie ahead. The even younger folks in the book who made it happen were the children of Pakistan whose desire for education was so strong that they would scribble math problems in the dirt. They also never doubted that Mortenson would build them a school . . . simply because he said he would. Finally, Mortenson notes that children in the U.S. "got it." They understood that kids on the other side needed schools, too.

2. It pays to have a celebrity endorse your project. Mortenson's big break was when fellow USD alum Tom Brokaw endorsed the project. Just as I wrote this summer about Gesine Bullock-Prado's bakery success being at least a little bit due to her famous sister, a celebrity connection helps.

3. Having a targeted market can help increase your luck. By having such a focus (a single school in this remote area of Pakistan), people who were in the target market got it, i.e., climbers and even the Pakistan-born owner of a computer rental store.

4. Local knowledge is a good thing. Mortenson took the time to engage locals in the process. Business is done very differently in Pakistan, and Mortenson couldn't impose his American way of doing business on a culture that predates America.

5. Logistics can kill you (literally). Moving materials and scouting sites are among some of the most harrowing adventures in the book.

6. There will always be unexpected setbacks. For Mortenson the biggest one was when he realized that after procuring the materials for his first school, he couldn't transport them to the building site because they needed to build a bridge to get the materials there. He had to stop the project and go back to the U.S. and raise money to build a bridge.

7. Your family has to be 100 percent committed to a quest like this or they won't be there when you finish. Mortenson had a hard time keeping a relationship going because, for him, the rest of the world stopped when he was over in Pakistan. It took a special person to stand by him knowing the physical risks and without the technological advances we have today that can keep people connected across time zones.

8. Build relations. The title of the book is Three Cups of Tea because Mortenson learned that he needed to slow down and have three cups of tea with people. Why? Because the first time you take tea with a person is as a stranger; the second, as an honored guest; and the third, you are family.

Daily Dose Bottom Line: I found the book interesting and enjoyed the last third more than the beginning. The biggest drawback was the poor writing/editing. The story jumped around a bit and, for someone who hasn't been to Pakistan, did not create enough of a visual of the cities and towns. The writer did a good job with the rural descriptions. Regardless, the message is solid . . . fighting wars over there is not going to resolve anything; but building schools can make a difference in the long run.

So ... since I alluded to it at the beginning, here's why I think we need entrepreneurs to rescue U.S. schools.

I'll start with a caveat that I'm not knowledgeable enough to discuss why our schools are failing our low-income populations. My views are as a suburban parent in what is supposedly one of the best public schools in Massachusetts. Yet, here are five things I'm seeing that keep even our best public schools from being in sync with what we're going to need culturally and academically in this century.

1. The school schedule still works on an agrarian calendar. Kids get off at 2 p.m. to go work in the fields. Um . . . wasn't that so two centuries ago?

2. The schools cater to a "nuclear family," meaning a stay-at-home parent. Nuclear families make up less than 25 percent of the population. Why do our schools treat this like the norm? Besides school days that end after lunch, there seems to be a huge increase in the number of half-days and requests for parents to be at schools during the day for numerous "show and tells." On top of this, divorced parents struggle to get duplicate copies of important forms and announcements. All of this has "non-nuclear" families jumping through hoops to try to fit into the school's preference for nuclear families--and I'm sure it's not easy on the schools, either.

3. Many school schedules are set because school buses have to do three shifts in a town, not on what's best academically for kids. In my town, the high schoolers go to school at 6:30 a.m. and the littlest ones don't go until 9 a.m. There have been studies that high schoolers can increase their test scores by simply getting one more hour of sleep than by having a language lab built in the school. I believe Po Bronson's NurtureShock: New Thinking About Children covers this. Besides, if high schoolers went later, and younger kids (who get up at 6 a.m. anyhow) went earlier, parents could get to work on time.

4. From what I understand, "new math" is being taught to include the less academically capable students, not to challenge the best and the brightest. I think this is admirable and understand that there are some very good reasons for this change. However, in the big picture, I'm not sure teaching to the lowest denominator is the best solution for the future.

5. Teachers are teaching to pass statewide exams. I'm actually not against teaching kids to problem solve under pressure or for rating teachers on performance, but might this be stunting creativity (and entrepreneurship!) for both the kids and the teachers?

If we want to prepare our kids for the future, shouldn't we be rethinking the institution that's shaping them? What do you think?

**Addendum. The morning after I wrote this, I read Thomas Friedman's "We're Number 1(1)!" in the NYTimes where he mentions lack of motivation of kids and parents as a factor affecting education. I agree, but I think this relates to the issues I pointed out above (and I didn't even bring up the homework and fund-raising pressures put on kids and parents). How can teachers, parents and kids be motivated to work within a system that is at odds with reality? We're trying to fit modern lifestyles into an antiquated system. This is how companies implode; how can we expect our education system to do differently?