Can Entrepreneurs Count on Community Banks?

By Carol Tice
August 26, 2011
Opinions expressed by Entrepreneur contributors are their own. 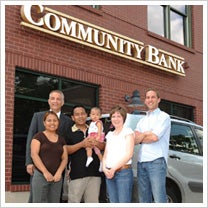 For years, the conventional wisdom was that small, community-based banks were good places for entrepreneurs to do their banking. It was easier to build a relationship with a local loan officer who lived in -- and cared about -- your town, rather than trying to convince a far-off national bank headquarters to lend you money.

There's only one problem: Small banks are disappearing.

What some may have hoped was a momentary, recession-fueled blip in smaller best banks going bust appears to instead be an ongoing trend. And it's a trend that doesn't bode well for small-business owners hoping a community bank might give them a better shake than the big national banking chains.

A recently released study by financial-services research firm Celent charts the decline of community banking. We've lost nearly 6,000 banks with under $100 million in assets since 1992, a 43 percent drop, according to the Celent study, It Takes More Than a Village Redux: The Decline of the Community Bank.

At the same time, assets have concentrated mightily in the hands of the top five largest banks. These banks held 11 percent of America's deposits in 1995, while today that's shot up to 35 percent.

What's this mean for small business owners? There will be fewer bigger banks and less choice in where you might go to get a business loan.

That means you need a sterling credit score and solid financials. Community bankers might sometimes loan based more on your story and reputation in your town. In the future, it'll be much more about the numbers.

Huffington Post founder Arianna Huffington started a campaign in 2009 urging citizens to move their money out of chain banks and to independents, in hopes of better distributing power in the banking sector and preventing future federal bailouts for "too big to fail" financial institutions. It doesn't seem to be working.

The question is, will the concentration of power at fewer and fewer banks hurt your business, or help it?

Where does your business bank, and why? Leave a comment and tell us whether community banks are important to your business.