Can You Enforce a Non-Compete?

By Rosalind Resnick
July 17, 2010
Opinions expressed by Entrepreneur contributors are their own. 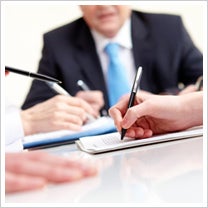 On the flight back from Tokyo last week, I struck up a conversation with an Asian-American entrepreneur whose company supplies fresh fish to some of the top Japanese restaurants in New York City.

Founded by his father back in the 1970s, the business has thrived by selling top-quality tuna, salmon and other imported and domestic species to satisfy the city's seemingly insatiable appetite for sushi. Unfortunately, the burgeoning market has also spawned competitors, including several of the company's former employees.

But didn't you make them sign a non-compete agreement?, I asked him.

Of course, he told me. But when he took one of his former employees to court, the judge refused to enforce the contract, ruling that the employee had the right to use his skills and contacts to make a living on his own.

What's a fishmonger--or any of us business owners, for that matter--to do when an employee quits and becomes a competitor?

Often, there's not a whole lot you can do.

"Courts rarely enforce non-compete covenants in employment agreements for public policy reasons," says Arina Shulga, a member of the Fridman Law Group, a New York City full-service business law firm that works with growing companies. "They reduce competition and prevent people from being gainfully employed in the area of their expertise."

Unfortunately for my seatmate in the sushi business, "Merely preventing competition is not considered a legitimate business interest," Shulga says. "Customer lists are generally not considered to be confidential information unless such lists are discoverable only by extraordinary efforts and not through public sources."

While judges occasionally make exceptions to safeguard a company's trade secrets or to protect a company from irreparable harm if the employee's services were unique or extraordinary, courts generally won't stop a former sales rep from going out and peddling competing products.

A better strategy, Shulga advises, is to make your non-compete agreement reasonable enough that a judge might actually agree to enforce it. This means limiting the term and geographic scope of the non-compete rather than trying to limit competition in general. "I also recommend including a so-called 'blue pencil' provision, giving the court permission to modify the terms of a non-compete covenant to make it enforceable," Shulga says.

The bottom line: If you're really afraid that a departing employee may open up shop and compete with you, you may want to consider paying him to take some time off so you can reach out to the customers or clients he used to call on and re-establish a direct relationship. It will probably be less expensive than filing a lawsuit, and a lot more effective as well.