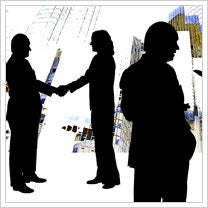 One of the popular sessions was called Pitch the Editors, and it gave attendees the chance to talk to Entrepreneur editors for three minutes. Not a lot of time, you say. Well, it's about two-and-a-half minutes longer than most consumers are going to give, so the owners came prepared. Pitchers brought samples of their products, explanations of their ideas and diagrams of their dreams, all in hopes of catching the right ear. And while there were far too many ideas to include in the magazine and on the website, we wanted to highlight a few products/ideas here.

Mark Hussman hopes his concept for selling fine fragrances resonates in consumers' ears. He plans to bring recording artists on board to fashion signature fragrances, which will be distributed with the artists' CDs. The samples of Ecoute scents fit into the spine of the specially designed CD case. The hope is that if the CD purchaser already likes the artist, he or she will like the artist's signature fragrance, too.

In the 1980s movie Major League, the imposing Serrano takes a teammate's driver head cover and puts it on his Louisville Slugger: "Hats for bats," he says, over the quickly muted objection of his intimidated teammate. Well, this isn't exactly that, but it is clothes for phones, music players, laptops, gaming devices and pretty much any other electronic thingamajig. Ding isn't the first company to offer skins for electronics, but the company boasts 50,000 SKUs and offers on-demand manufacturing and a paperless ordering system.

Web design is a hot topic these days. Matthew Burlile promises a website in a week with 7 Day Web Design. He says it used to take way too long to design sites for people. He looked at the process, decided he could do it better and started his own biz. David Finstrom doesn't promise a website in a week; he gives people the tools to do it themselves at HUTdogs, a DIY site with the small-business owner in mind. He says there are all kinds of options for people willing to spend $20,000 for a site, but not much out there for those with a more modest budget. He sought to remedy that.

I met all kinds of other folks, too. There was the landscape architect who was a horticulturist, which you wouldn't think is a rarity but apparently is. There was the woman who uses seven SEO techniques that get around Google and its constantly changing formulas and algorithims. There was the woman with the green office handbook; the woman whose husband created a water-conditioning device that can be scaled for home, commercial or farm use; the company with the scented pillow liners; and the guy with the hangers, who just happens to be Entrepreneur Magazine's 2008 Entrepreneur of the Year, Devon Rifkin.

And there was the double-dipped peanut-butter-and-jelly chocolates. They weren't pitched; they were in the gift bags. My initial giddiness was met with trepidation. On the label: Organic. Vegan. Didn't matter. They were good and a good idea.