By Laura Lorber
December 1, 2010
Opinions expressed by Entrepreneur contributors are their own. 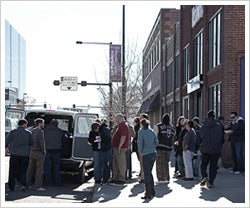 We just finished Week No. 2 of our Social Media Challenge, the live test case we're conducting to show how social media can drive conversation, influence and sales. This post will go down into the trenches of our four-part BBQ Battle campaign to promote Denver's Big Papa's BBQ, providing a closer look at our day-to-day social interaction and what we're learning from it.

With Big Papa Pop Up rib giveaways, we're searching for the locations, audiences and times of day that offer the biggest bang for the dollar. Who will talk about getting free ribs the most online to their friends after sampling them? We thought it'd be smart to start by impressing the press here in Denver -- with the intent of getting coverage and persuading their followers to become fans of Big Papa's BBQ on Facebook and Twitter and to visit the restaurant.

We found the food editors of a local newspaper called Westword on Twitter and began sending them Tweets with hints that we were coming with grub. A week after giving away 100 servings of baby-back ribs and coupons to Westword's writers and others who saw our announcement, an article appeared in Westword's CafÃ© Society blog, giving us free press and a jump in followers. Three days after the Westword post, we had 35 additional Twitter followers and 30 additional Facebook Likes. This means we're now on the social radar, popping up in the stream, of a chunk of new people. The beauty of an online article is that it may be accessible indefinitely. People will stumble across the piece and we'll gain additional followers into the future.

We followed up with another pop-up before a Denver University hockey game and at a holiday-lighting celebration the evening after Thanksgiving. Both were announced on Twitter and Facebook. At both events, 100 servings of free ribs disappeared as quickly as we could hand them out to surprised and appreciative BBQ fans.

As noted before, we're also collecting the email address of every person who gets free ribs or takes a coupon, allowing us to open a communication channel by emailing them the following day with details about the larger campaign and how they can get in on it. Our email list has grown by nearly 300 addresses, a 50% increase in just two weeks.

We noticed a reluctance by the college students at Denver University to give us their email addresses. At our next pop-up, Saturday night when the bars let out in Denver, we'll ask people of a similar age to instead "Like us" on Facebook or follow us on Twitter on the spot using their phones to get their free bones.

We'll let you know how it works. Meantime, let us know what you think of the experiment so far.